Dear Josh, In response to my question of how those in your country might respond if hit by a jihad terror attack more lethal than 9/11 you offered some compelling points:

You were probably asking that rhetorically, but the truth is that Canadians would probably feel responsible and blame ourselves for the attack!

How do I know this? Because every time a terrorist has attacked or threatened to attack Canada, that’s exactly what’s happened.… So if terrorists want to attack Canadians, it must be because we’re doing something to make them mad! … There’s a great old saying in Canada, Dave: “Being a Liberal means never having to say you’re sorry.”  Until Canadian conservatives find their own way out of having to say sorry all the time and being shamed for their beliefs, we’ll be stuck in the margins.

We both face the same challenge, my friend: how do we get those around us to wake up to the evil that threatens Western civilization’s survival? You Canadians -- and we Midwesterners -- are known for our politeness. What does it take to finally inspire us to get over that and take action to try and enact change?

I offer you an initial tool kit of 10 books from six of the authors who have inspired me most personally. They have shaped my understanding of politics, culture, activism, media, and writing and I hope you might find them useful in your own battles.


ANDREW BREITBART
Righteous Indignation: Excuse Me While I Save the World!

The new media publisher and ideological crusader died suddenly in March of 2012 and I wrote about what he meant to me and my peers in a PJ Media article titled “Immortality: Andrew Breitbart’s 5 Gifts to Generation Y Conservatism.”

I explained how Breitbart saw media and culture broadly, understanding the political fight of liberals vs conservatives as one piece of a bigger battle. These were some of the lessons I highlighted from Breitbart’s life that you can see more in his biography and manifesto:

Those could said to be some of the core values of the broader California-centric movement that I named in the beginning of this series: Andrew's Right: New Media Counterculture Crusader Conservatives.

What distinguishes this wing of the American conservative movement is its focus on entrepreneurship, exploring new medias and technologies, reacting against radical Marxism and Leftism rather than “liberalism”, and also an emphasis on popular culture and narrative storytelling. In my own shifting this summer toward novel writing and editing and joining a new business at Liberty Island I regard myself as following this path still.

And Josh, whether you realize it or not you too are on this path. I regard Rebel Media and its fighting leader Ezra Levant as the practitioners of this tradition in Canada -- which is why I’m contributing.

ROGER L. SIMON
Turning Right at Hollywood and Vine: The Perils of Coming Out Conservative in Tinseltown
The Party Line: A Play in Two Acts (by Sheryl Longin and Roger L. Simon)

Simon’s first career was an award-winning mystery novelist and Academy Award-nominated screenwriter before starting the team of bloggers that began as Open Source Media before becoming Pajamas Media and ultimately PJ Media and PJTV. Read Roger’s memoir for the story of his journey through politics, culture, film, and life. Here’s my favorite excerpt from it that I also regard as a further statement of principles for the movement:

Simon stepped down as CEO/Editor-In-Chief of PJ in February of 2013 to return to focusing on creative writing. For an example of the kind of work he’s developing now, check out the play The Party Line. It’s a historical drama he co-wrote with Sheryl Longin (screenwriter of the hilarious political comedy Dick) that brings to life the most infamous Pulitzer prize winning journalist of the 20th century: Walter Duranty. He was the Moscow correspondent whose Stalin-praising propaganda articles for The New York Times inspired Franklin Delano Roosevelt to recognize the Soviet Union.

(If you’re looking for a ground zero of how the 20th century was ruined then look here. The Cold War did not have to happen...)

Simon inspires by showing the way to wake people up to these historical realities and big picture truths -- through entertaining narratives.

I edited some of Klavan’s columns at PJ for years and observed his style of blending light and dark, humor and horror, the high intellectual point with the low-brow belly laugh. Klavan is a thriller writer whose books have been made into movies starring Clint Eastwood and Michael Douglas. His new novel Werewolf Cop is a tremendous inspiration to me -- it’s the perfect example of the kinds of novels I want to write myself and edit at Liberty Island.

Klavan takes familiar genre conventions, blending horror and detective themes while staying focused on developing memorable characters and a twisting plot rather than making some easily summarized blog post point. What does the idea of the Werewolf symbolize? The evil inside us? Our animalistic nature? Something about masculinity? Is the challenge to learn how to channel our inner werewolf/evil toward good? It’s up for the reader to grapple with it.

The “conservative” or Biblical ideas are all artfully woven into the background. Klavan hits the sweet spot between accessible, exciting genre story but told with literary style and thematic depth. Just as the space between meaningful “literature” and the exciting “potboiler” can be melted away, so too can the idea that fiction is just a means for delivering diversions.

Why write novels and screenplays? Because stories sneak into people and turn them in ways they can’t control and predict as much. A narrative that people engage on an emotional level can transform when a mind has closed itself to rational arguments.

MICHAEL WALSH
The People V. The Democratic Party
The Devil's Pleasure Palace: The Cult of Critical Theory and the Subversion of the West

Walsh has a long career as a journalistic, music critic, novelist, screenwriter, and also the original editor of Breitbart’s Big Journalism site. I got to know and work with him at PJ and he’s also had a transformative impact on my understanding of politics and culture. Start with the pamphlet he wrote that chronicles the history of the Democratic Party beginning with the bullet Aaron Burr fired into Alexander Hamilton and concluding with the rise of the Chicago Community-Organizer-In-Chief Barack Obama more than 200 years later. Walsh argues that the Democrats are best understood as a criminal organization posing as political party. He explains the deep connections between political activism, crony city machines, slavery, and foreign enemies of America. It’s a big turning point that few political activists make: understanding one’s opponents not as misguided activists and politicians just trying to implement bad policies, but as actual criminals who do not respect the rule of law and are actively seeking to subvert the system for their benefit. Politics is not an effective tool for overcoming a criminal gang.

His new book The Devil’s Pleasure Palace, just published last month from Encounter, takes the moral clarity of his pamphlet but broadens the scope to 20th century culture, philosophy, art, religion, poetry, and music, showing their interconnections. Josh, this book is going to be the Rosetta Stone for so much of the cultural relativism you’re dealing with in Canada. Walsh pinpoints the specific post-World War II philosophers and academics -- the Frankfurt School, Deconstructionists, Cultural Marxists, and Critical Theorists -- who planted the seeds of doubt that have now taken root throughout so much of North American culture high and low.

I’d also urge you to read the book with the professional writer’s eye too. Just as Klavan’s book is a great model for a novel, Walsh’s book is a model for how to tell nonfiction, polemical narratives that can connect the dots across mediums and centuries.

BEN SHAPIRO
The People Vs. Barack Obama: The Criminal Case Against the Obama Administration
Primetime Propaganda: The True Hollywood Story of How the Left Took Over Your TV
Bullies: How the Left's Culture of Fear and Intimidation Silences Americans

Shapiro was especially close to Breitbart while he was alive and an important collaborator. I regard him as carrying on the Breitbart torch for my generation (he’s 2 weeks older than me.) His three most recent books -- published in 2011, 2013 and 2014 -- you’ll find the most useful. Primetime Propaganda features original interviews with Hollywood TV creators where they admit their intent to subvert the culture toward their political goals. It’s further a fascinating study of the history of television and its cultural impact. The People Vs. Barack Obama is in the same spirit as Walsh’s pamphlet, taking a criminal focus on the administration. (Shapiro is a Harvard-trained lawyer too.)

Bullies came out in 2013 and is dedicated to Breitbart -- it’s that spirit in particular that you may want to keep in mind when dealing with Canadian leftists. Really, what we’re doing engaging with these people at a political level isn’t much different that standing up to the bully and his lackeys on the playground. The same principles that apply there work here and Shapiro puts the pieces together across many issues and media stories. (Also check out Shapiro’s new publication, The Daily Wire, and the morning radio program from 6-9 AM PST on AM 870, he co-hosts with Elisha Krauss and Brian Whitman.) 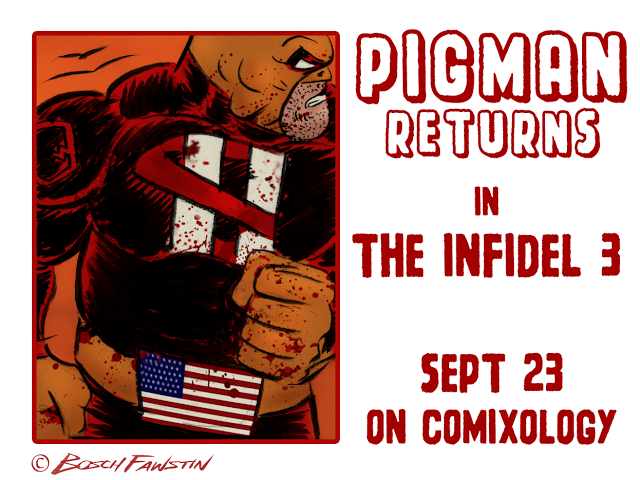 Today the 3rd issue of comic book artist Bosch Fawstin’s graphic novel The Infidel is on sale at Comixology, an independent publishing platform. (I reviewed issue #2 in 2012 here.) Since then Fawstin has grown more well known -- winning the top award at the Draw Muhammed contest that was attacked in Garland, Texas. Bosch is an ex-Muslim who now follows Ayn Rand’s Objectivism. The same kind of strong creative energy that Ayn aimed at the statists and tyrants of her day, Bosch targets toward Jihadists and their politically correct apologists on both the Left and Right. The graphic novel cuts together two narratives - the comic-within-a-comic story of Pigman, a Counter-Jihad superhero -- and then the struggle of his creator, Killian Duke, a character who bears more than some resemblance to Bosch himself in appearance and ideas.

OK, I’ve gotten ahead of myself a bit in this series. Now that I’ve explained the two overlapping movements that explain my own ideological biases I’ll jump back and explain how we got here and the parallels to the problems you’ve described with your own Canadian Conservative Party “establishment.” Our story mostly takes place in the 1950s with a brief stop over in the 1850s too and a conclusion summarizing some of the GOP candidates today...

You must be logged in to comment. Click here to log in.
Audrey Seabrook commented 2015-09-24 01:04:00 -0400
I might suggest the addition of Bill Whittle. I particularly loved his suggestion of “Thinking Small”. Take back the block, then the community, then the town, the city and,eventually, the country. Practice conservatism at the local level and watch it grow.