UPDATE: Watch the shorter, 90-second version of our undercover video here, with the highlights. (PS: It's perfect for sharing.)

We sent a reporter to attempt to vote while wearing a full, face-obscuring niqab.

We sent David Menzies, a six-foot tall man. We gave him three instructions:

1. Don’t take off the niqab;
2. Don’t lie or try to trick anyone; and
3. Keep his undercover camera rolling, no matter what.

If you’re as appalled as we are, SIGN THE PETITION demanding that Elections Canada ban wearing a niqab or any other face mask while voting.

It’s one thing to insult Canadian culture by degrading women. It's just insane to let people vote without showing their face. Please forward this to all of your friends and ask them to sign the petition.

PS: Here’s the entire, unedited tape of David, from the moment he went in, to the moment he came out. For legal reasons, we are not allowed to show the actual moment of voting — it’s the only part of the tape we’ve edited:

UPDATE: By popular demand, we've added a SECOND version of our "Separation of Mosque & State" t-shirt to the Rebel Store! 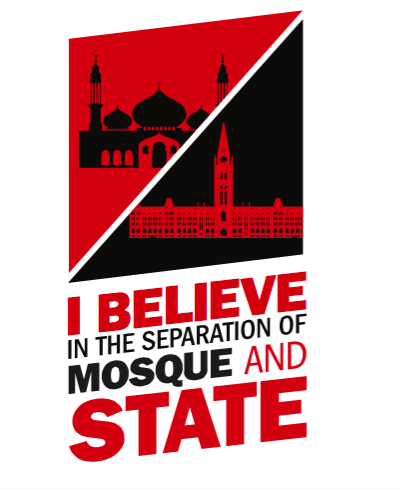 UPDATE: A quick history lesson from Brian Lilley offers a fresh perspective about the niqab issue you won't see anywhere else -- especially because the Media Party are the biggest hypocrites on this controversy.

Lilley's story of the Hutterites' court challenge over drivers' license photos has been one of The Rebel's most popular and talked about recent columns.

READ the whole thing -- and add your thoughts in the comments!

Don't miss this! Quebec journalist Chantal Hebert takes Andrew Coyne to task after he complains that too much of the French-language leaders' debate was devoted to Muslim face-coverings:

As already revealed in The Rebel's own polling -- see below -- ordinary voters in that province are overwhelmingly opposed to these face coverings, and Duhaime says it will cost the NDP votes:

September 18 UPDATE -- Our poll results are in!

Thanks to our generous viewers, we commissioned a professional, independent public opinion poll. And we just got the results back:

78% of Canadians agree, that anyone taking the citizenship oath must take off any face-obscuring veil, including the Muslim burka or niqab:

Thanks again for your support — this poll was paid for by grassroots Canadians like you.

Today the Conservatives promised to appeal the court's ruling! Watch how other parties reacted to the judges' decision, too:

In the first 24 hours, more than 10,000 Canadians signed our petition demanding an appeal of this unCanadian, undemocratic decision to enforce Muslim sharia law in our country. It's an amazing response!

(If you haven’t signed the petition yet, it isn't too late! Click on the red button at the side of this page.)

PLUS: Our national, professional opinion poll on the subject is being carried out right now. We'll tell you the results very soon.

Like our petition, this poll is a way for ordinary Canadian voices to be heard. If you can help us crowdfund this opinion poll, to help get those voices out there, we'd be grateful. Please donate through the red button on the right side of the page, or below.

Finally: People have been how else they can show their outrage at this decision. So we came up with a NEW Rebel T-shirt, emphasizing the separation of mosque and state! Here's the design: 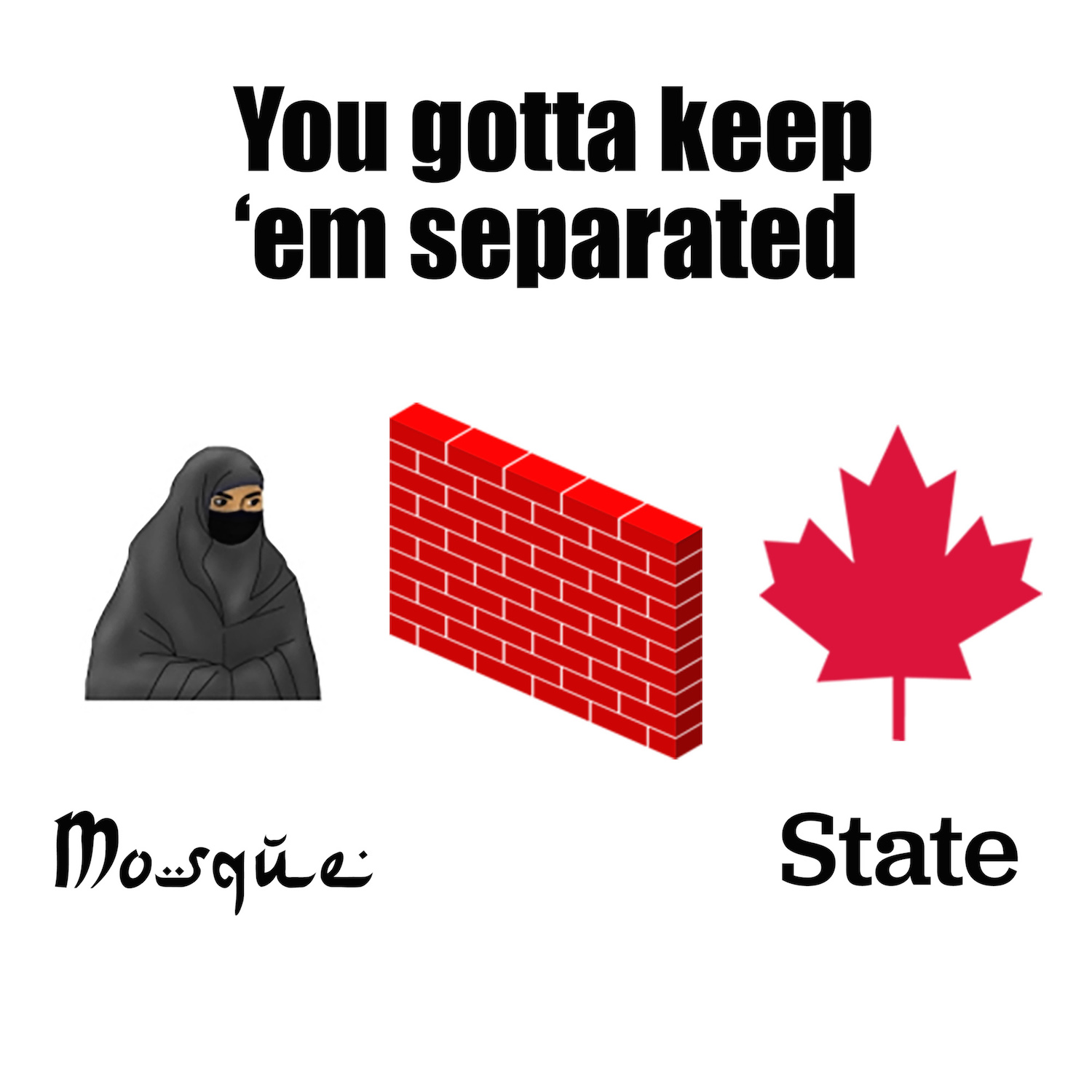 You can order them exclusively from our online store, by CLICKING HERE!

In a shocking decision today, the Federal Court of Appeal ruled that foreign citizens can wear a face-obscuring Muslim burka to Canadian citizenship ceremonies — and the Canadian government has no right to ask to see their face while they take the citizenship oath!

Wearing a burka is wearing a mask -- something that would normally never be allowed in a court. But the burka is no regular mask. It has a special, misogynist purpose: to keep women subjugated, to keep them separated and subordinate to men.

By allowing an extremist interpretation of Islam to trump our democratically-elected government, the Federal Court of Appeal is replacing secular law with sharia law.

This is atrocious. We need a separation between mosque and state. We need to fight back in two ways:

First: SIGN A PETITION, to get the federal government to appeal this radical federal court of appeal ruling, up to our Supreme Court. You can sign the petition on the top right corner of this page.

Next, we need to CROWDFUND A NATIONAL POLL — immediately — to show what real Canadians think of this slap in the face to Canadian values. (I estimate we need $1,500 to pay for that poll, and hopefully we’ll get the results back in a couple of days. We need to act fast.)

PS: Please SHARE this video to your friends. Tell them to visit ShowYourFace.ca to learn all the facts and keep up with the latest developments.

Let's make this an election issue, and work together to say "No" to sharia law in Canada. That starts by telling radical Muslims that if they want to be Canadian, they've got to be Canadian. And show their face.