After Gregory Alan Elliott was judged not guilty on Friday, the social justice warriors and their friends in the mainstream media were outraged.

They were outraged to the point where they completely divorced themselves from reality.

Even though the judge provided a clear explanation for why Elliott wasn’t guilty, radical feminists pouted and protested as if they had personally fought a three-year court battle and been forced to spend almost one hundred thousand dollars.

It’s hardly a surprise. The judge could have provided undeniable proof that Stephanie Guthrie and her cronies were Nazis and the radical left would’ve cheered as they led people to gas chambers.

Prominent feminist activist and self-described “buzzkill” Julie Lalonde tweeted that regardless of the evidence, she “believes the victims”. I’ve heard this one before.

The most frightening aspect of this outrage were the members of the media working to undermine the judge’s decision. Buzzfeed’s Ishmael Daro asked people to tell him about the harassment they’d been subjected to as a result of the Elliott case. He didn’t ask for evidence or proof. 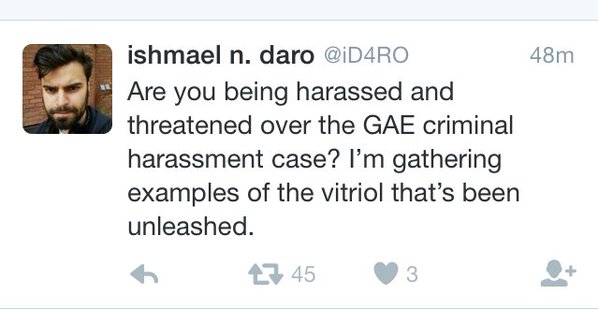 Ishmael published an anonymous note from an individual claiming to have been harassed by Elliott’s supporters. In this story the individual claims that “as a woman” she had been subject to “indescribable” terror upon hearing the verdict.

Ishmael’s note was shared by John Bowman, a CBC “social media producer”, who seems to have spent his weekend filling his Twitter timeline with inane rants: 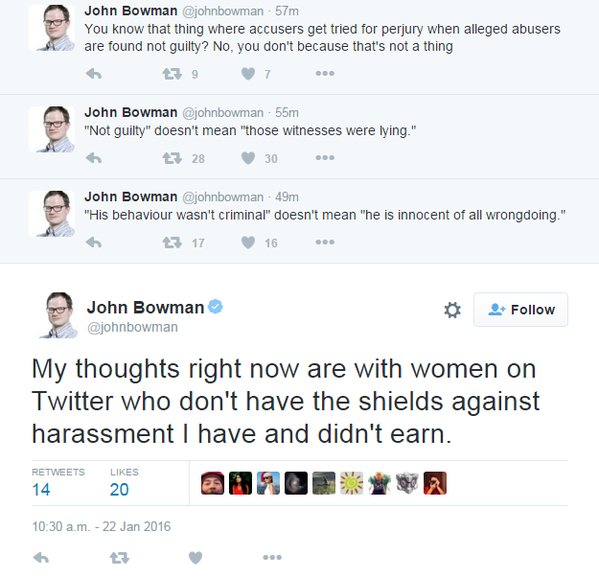 No matter what the facts say, Gregory Alan Elliott will always be guilty in John Bowman’s heart.

The authoritarian left won’t let a judge’s verdict stop them. They don’t care about evidence. They are quite comfortable slandering Elliott and his supporters with nothing in the way of corroboration but their feminism-addled intuitions.

Even after he was proven innocent, the exasperated Bowman and Daro clung to the fantasy that he was guilty of something.

In the past, Bowman positioned himself against alleged harassment perpetrated by the members of #GamerGate.

He’s also claimed that as a man, he has magic defenses against harassment that women don’t have, and that blocking people isn’t necessary for him because of his white male privilege. Daro isn’t much better.

These men seem too good to be true! Two unwavering male feminists who defend women, and who would support self-described “victims” at any cost (even if it means ignoring evidence).

Given these men’s extraordinary commitment to feminism, I thought it appropriate to fire back with some feminism of my own.

Bowman’s political disagreement with me “felt” like harassment, he even mentioned me in a tweet without my consent! Given his white male status and oppressive blue checkmark, my victimhood was assured.

I knew I couldn’t have been the only casualty of Bowman’s Twitter harassment. I called out to other people who’d been subject to abuse at his hands and Daro’s as well. 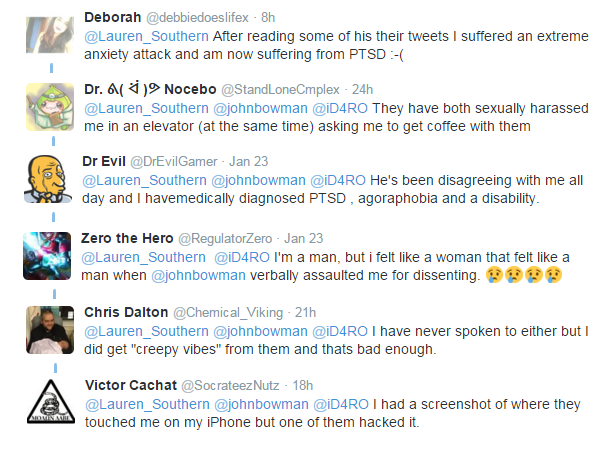 The brave confessions flooded in! Even if the law decides they are unreasonable or lacking proof, their feelings are ample evidence of criminal harassment at Bowman and Daro’s hands.

I had over 40 people contact me claiming they’d been harassed. This ought to be enough to have these two men criminally charged. Precedent has been established to allege criminal acts and drag people through hundred-thousand-dollar court cases on this basis, after all.

Obviously these "confessions" are nonsense, like much of the slander made against Elliott. It would be educational if one day people like Bowman and Daro were subject to the logical consequences of their slander, but thanks to the verdict in this case, that’s not going to happen.

People on the authoritarian left may feel comfortable stomping over the rights of those who disagree with them. But they ought to imagine themselves in Elliott’s position. Anyone who argues on the Internet could be subject to criminal prosecution under Canadian law.

If people like John Bowman and Ishmael Daro continue their slander, they may find themselves in that position awfully soon. And should thank Elliott that "feelings" won't count as ample evidence against them.

Any government in Canada that opposes oil & gas pipelines
should lose its share of oil & gas equalization payments.
SIGN THE PETITION at CutThemOff.ca

You must be logged in to comment. Click here to log in.
Mac Dale commented 2016-02-15 11:17:07 -0500
Enough, please sign the petition to recall Trudeau and a Refendum on immigration. Turn your back on Trudeau. Sign and share please.
https://www.change.org/p/the-governor-general-recall-trudeau-no-confidence-in-his-leadership?recruiter=488908250&amp;utm_source=share_petition&amp;utm_medium=copylink
Tony Benjamin commented 2016-02-12 21:55:31 -0500
Please help me fight for free speech. By the way, my little petition was censored on Facebook. https://www.change.org/p/wendy-lynn-stop-maclean-s-from-being-unjustly-offensive-to-canadians-ask-them-to-recant-apologize?recruiter=159326249&amp;utm_source=share_petition&amp;utm_medium=facebook&amp;utm_campaign=share_for_starters_page&amp;utm_term=des-lg-no_src-no_msg&amp;fb_ref=Default
Halifax Donair commented 2016-01-26 12:37:49 -0500
Tell Brian Lilley there is a gold mine of CBC malfeasance with both Bowman and his chum David Demchuk.

Actually I believe my example trumps them all. I was charged with this offense through the complaint of one Suzan El-Khatib who is the defamation lawyer for full patch Hells Angel Damiano Dipopolo. http://neer-do-well-hall-of-infamey.blogspot.ca/p/suzan-el-khatib.html (Aside, a close working associate of a lifetime, full patch Hells Angel is living in abject fear of harm from a blogger with no record? Riiiiiiight)

Yup, poor woman was beside herself with fear while collecting info from the cops unavailable anywhere else. Now my mugshot has been twittered several hundred times and details from 24 years ago are being spewed with glee. No, I could not possibly make this up. http://neer-do-well-hall-of-infamey.blogspot.ca/
Darryl Teskey commented 2016-01-26 09:55:35 -0500
More of the hurt feelings crowd again, getting out of control, Our tax dollars at work folks. bunch of whining crying professional victims of everything.
Justin Adam commented 2016-01-26 05:10:43 -0500
I just don’t get it, How the hell u get PSTD over bad words and tweets? Those fem-nazis need a safe space? What is this world coming to? Great good job Lauren and keep fighting for freedom Rebels, and seriously I just hate Fem-nazis and why don’t they just get a life?
Mark Schmidt commented 2016-01-26 00:53:24 -0500
Hahahaha Lauren is the best. Made my day.
Guy Fraser commented 2016-01-25 22:27:18 -0500
Andrew Sheldon – Her website is down now … awe
SJW Feminazi tears for sale … get them while their warm and extra salty
D Mary commented 2016-01-25 19:39:59 -0500
If there were a precedent, it would be Gordo Steele and all his aliases spouting lies, racism, bigotry, etc and he would be in jail, since he has no money or assets to sue for.
Bill Elder commented 2016-01-25 19:28:53 -0500
Bowman and his fellow fembo wannabe seem to associate so stridently with women’s emotional issues that one wonders if they experience sympathetic PMS symptoms.
In any event it seems an unhealthy obsession.
chris mcgauley commented 2016-01-25 19:11:34 -0500
Went to the provided Stephie ( such a cute unassuming name ), comments closed. It does state that she has a total of 94 (huge) people signed up to follow her blog. Somebody at mental health please offer this person an intervention.
Dr. Genius commented 2016-01-25 19:09:43 -0500
«Sounds like a malicious prosecution case to me. Sue them for everything they have of ever hope to have»