Earlier this week I launched the new #FreedomOfTweets campaign to support Gregory Alan Elliott, the Toronto artist who has been dragged through the Canadian court system for over three years.

I have worked with Gregory’s son Clayton Elliott to coordinate this campaign aimed at raising money for Gregory’s legal fund, ensuring his story is accurately represented in the media, and to raise public awareness about the state of free speech in Canada and on the web.

In November 2012, Gregory Alan Elliott was arrested and charged with criminal harassment after arguing with feminist activists on Twitter. He did not threaten or endanger anyone. All he did was argue and criticise. As a result of his detention and trial, Gregory has accumulated nearly one hundred thousand dollars in legal fees. His bail conditions also prohibited him from using computers and the internet, forcing him to quit his job as a graphics designer. 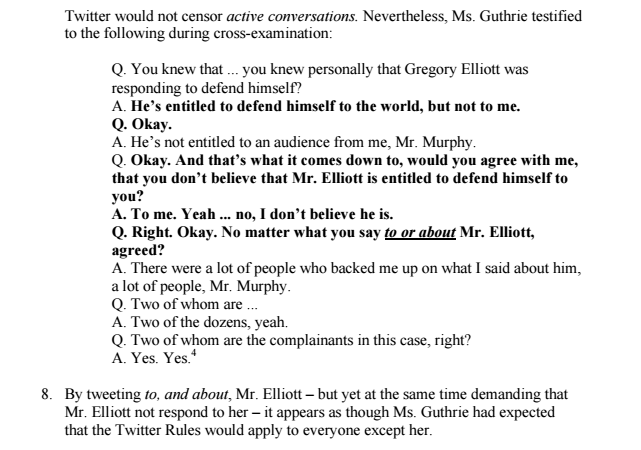 (This excerpt from the court documents demonstrates the extraordinary attitude of Ms.Guthrie, one of the complainants in the case, on the issue of “online harassment.”)

Over the course of the trial, it has been repeatedly established that Gregory’s accusers had not been threatened and never had reason to fear for their safety. Gregory has no criminal background, and his critique of the activists was nothing more than a political and moral disagreement. If convicted, he could face up to six months in jail, setting a chilling precedent for free speech on the internet.

I’ve gone further into the case and its specifics in this interview and this update with Clayton Elliott. I will also be continuing to report on the case for The Rebel, so be sure to keep following me here!

Simply by sharing the #FreedomOfTweets hashtag and fundraiser over social media, we have already had $5000 donated over the past few days!

I will be joining Breitbart Tech co-editor Milo Yiannopoulos on his YouTube channel for a #FreedomOfTweets livestream. CLICK HERE to watch and participate. 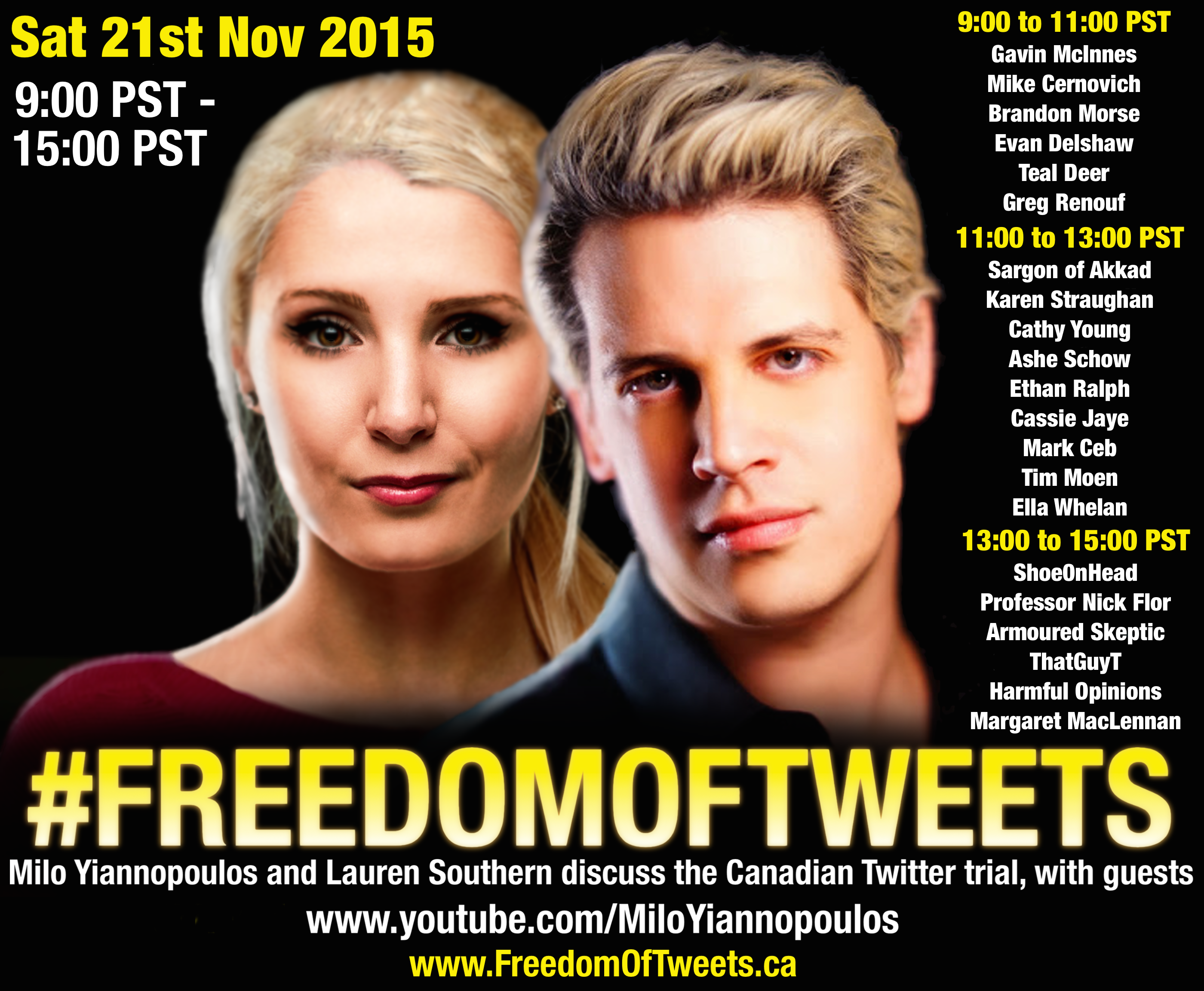 The trial of Gregory Alan Elliott is one of the most important free speech cases in Canada. A man has been put on trial for little more than political disagreement. If Elliott is convicted, everyone in Canada will have cause to be afraid of expressing themselves freely on social media.

I hope that supporters of free speech on the web will recognise the importance of this case, and lend their support to Gregory Alan Elliott. Some good can come of this if we show the world that the public will be galvanised when an individual’s free speech is threatened.

If you want to support the campaign, visit the #FreedomOfTweets website here.

You must be logged in to comment. Click here to log in.
Tresus Capax commented 2015-11-24 15:53:42 -0500
Drew,
I don’t know what you’re trying to say.
If you can’t express yourself in coherent English, is there anyone who can help you?
Drew Wakariuk commented 2015-11-24 02:08:00 -0500
Tresus how do those Muslim men and those little boys in the pic with that liberal drunk reproduce?
Tresus Capax commented 2015-11-23 12:38:32 -0500
Aww, that’s cute! An dude-bro family!
How do they reproduce?
Drew Wakariuk commented 2015-11-23 02:42:22 -0500
I really find it hard to believe we even have that charter the lefties yammer on about proudly, they ignore it all the time and never give a damn when it is ignored by others , even the courts. I wonder if any progressives have actually read the damn thing?
Gordon Tupper commented 2015-11-22 19:34:00 -0500
Invasion on free speech and expression is just starting. Expect it to be much worse. The word hate crime will be the new phrase for the next 4 years.
Gordon Tupper commented 2015-11-22 19:31:47 -0500
PETER NETTERVILLE can be thoughtless and misogynistic because he knows she won’t sue him.
Ron Bissett commented 2015-11-22 17:36:08 -0500
Would winning this case mean Guthrie would also be held to the same standard, unable to legally defend herself against any accusation levied agains her? All rebuttals or defences would become illegal. It would appear, by this ruling, if she should win, anyone making a claim would never need to defend themselves. Every argument would become a case for law. All opposing views would be made illegal. So incredibly dangerous! So incredibly confusing. Think of the repercussions. Don’t. Your brain will seize up.
Ron Bissett commented 2015-11-22 17:34:13 -0500
Okay, Netterville, what does “A peek into Lauren’s bedroom” mean? What an imbecilic statement. It has no substance or content in which to reference your statement. If you were on Jeopardy would the question be “What do you desire most?” or would it be “What was the last thing you took without permission?” What a foolish statement to make without any reference.
Peter Netterville commented 2015-11-22 12:40:35 -0500
A peek into Lauren’s bedroom.
Sam Young commented 2015-11-21 19:49:08 -0500
If you want people to take you and your cause seriously, you should distance yourself away from Gavin. Gavin is nothing more than an ignorant loud mouth that ruins the credibility of the people that associate with him.
Guy Fraser commented 2015-11-21 18:43:14 -0500
From everything I have seen and heard about this trial, Ms. Guthrie is the predatory hate monger and Mr. Elliott was one of her victims. I know the Elliott family is adamant that Ms. Guthrie and her Coven of Social Justice Witches not be singled out or targeted but in my personal opinion those predators need to be charged and tried and if found guilty made to pay restitution and be banned from social media, internet publishing and online communication of every type for life.
Lance Humphries commented 2015-11-21 17:14:24 -0500
I’ve seen Steph Guthrie on The Agenda a couple times. No question she’s psychotic. That the judge postponed making a decision is a bad omen, as this case was so easy a 6yr old could make the decision. So the Elliot family had best get in mind that they’ll lose this round and have to appeal, otherwise, they stand to be devastated and beat down.
What’s equally frightening, is that the Crown’s office would pursue this with such incredible zeal. One has to wonder if there’s a greater agenda on their minds. Like, once they win this, they’ll be able to . . . . . ?? Lefty / feminists ALWAYS have a hidden or secondary agenda.
Lastly, so much for women creating a “kinder / gentler society”. These women are tearing down free speech, democracy and rule of law. And for what exactly?
Bravo Zulu commented 2015-11-21 14:49:55 -0500
He will be found guilty – after all you cannot criticize a woman in public – even if you are right – the lefty judges will hang you.
Merrill Meikleham commented 2015-11-21 14:30:38 -0500
Poor guy! Beware. Criticism of government could be on the no-no list somewhere down the Liberal road!
Donald Craig commented 2015-11-21 12:41:34 -0500
would we be shocked if one of our left leaning judiciaries found for the fascist beotch? the opposite would be a gobsmacking result…for all… btw will the feminist fascist now go after this rebel?
Edward Jobin commented 2015-11-21 11:30:47 -0500
I am so sorry for Gregory Elliot and so thankful for you and your team raising awareness of this issue and it’s importance to our freedoms to all of us.