No sooner had the Academy nominations been announced than we saw an immediate backlash from social justice warriors via the resurgence of last year's #OscarsSoWhite hashtag.

Liberals took to their favourite safe-space, Twitter, huffing and puffing that too many white people have been nominated once again: 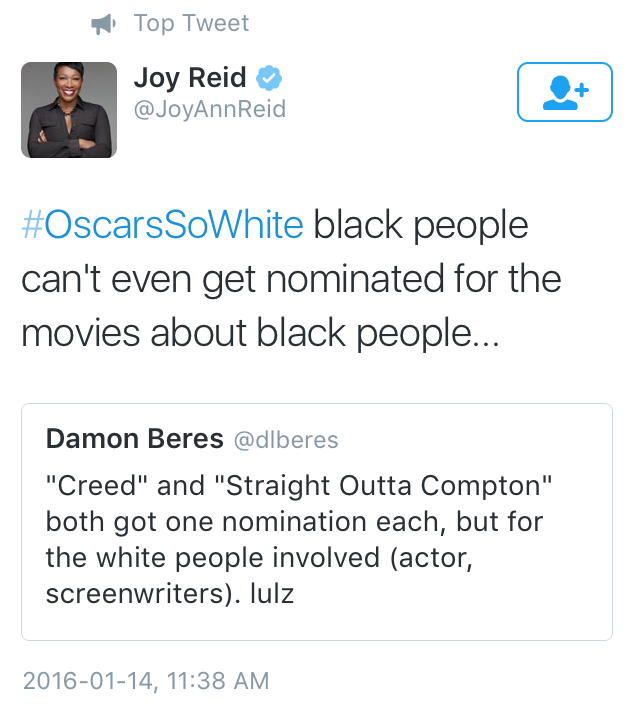 Okay, so the underlying frustration with a lack of diversity in the Oscar nominations isn’t completely wrongheaded, as I’ll get to in a minute.

However, the main argument driven by the Left is complete and utter lunacy.

What the Left are calling for here is affirmative action. No one is pointing to any individual actor in a specific film and suggesting, “that guy gave a better performance than DiCaprio or Christian Bale for such-and-such reasons." They just want more black actors – even at the expense of other actors who may have given stronger performances.

The fact is – and I’m sorry to say – liberals yearn for a sense of moral superiority, which they derive from meaningless actions like Tweeting about “white privilege” and “institutional racism."

But the #OscarsSoWhite hashtag has nothing to do with diversity and everything to do with the Left’s Marxist agenda – now being driven under the banner of “social justice."

I’m sorry, but having a group of people who think exactly the same way is not diverse just because some of those people have darker skin.

Diversity should imply that there is some discernible difference in thinking and ideology within the group.

The proponents of the #OscarsSoWhite hashtag were for the most part the same people on college campuses trying to ban Clint Eastwood’s American Sniper from screenings.

They’re the same people who – I guarantee you – will protest in the coming months to have Michael Bay’s 13 Hours: The Secret Soldiers of Benghazi pulled from public screenings on campuses.

You can’t claim to be for diversity while simultaneously shutting down conservative opinions.

So, if you really do care about diversity than I suggest Tweeting the hashtag #OscarsSoLiberal, and drawing attention to the fact that Hollywood does in fact lack diversity  not in skin color, but in ideology.

Canada needs a conservative infrastructure to influence the culture!
SIGN UP at RebuildTheRight.ca to be part of this new movement

You must be logged in to comment. Click here to log in.
Brent Johnson commented 2016-01-20 11:34:32 -0500
Sorry, Mr. Washington, you did not get the Oscar for your stunning performance in “Glory”, you got the Oscar because you were black; I thought Oscars went to actors that earned the praise, not for their race. To be fair, Oscar night should be spread out over as many days as there are races, further segregating the population. We’ll have to be careful, though, which race gets the first night and which race gets the last night will probably be offensive.
Michael Mann commented 2016-01-20 02:49:32 -0500
13 Hours: The Secret Soldiers of Benghazi is already a bomb, so no worries there. No one cares about Benghazi.
Michael Mann commented 2016-01-20 02:47:32 -0500
The fact of the matter is that there was no performances by black actors this year that were worthy of being nominated compared to those that were actually nominated.