Or as one of my aphorisms explains:

The tail always wagged the dog: Now, because of political correctness, the flea on the hair on the tail wags the dog.

The political key to Trump is not just his appeal to populism, but how this upsets the traditional approach of politicians both left and right.

He asks, in effect, what is wrong with populism if it is what the majority want? It’s just another word for democracy. Spiro Agnew’s "silent majority” has found a voice in Trump. There is a reason he will get approximately 65 per cent of the vote.

Traditionally, those right or left of centre move to the centre in order to garner enough centrist (independent) votes to win the election. This tactic usually fails, because — as with Romney, Dole, McCain, and Harper, among others — the public are not fooled. In fact, they are insulted.

They know this shift is merely a compromise of principles to get votes. Those further to the right and left respond by simply refusing to vote all together.

In most populations, there is a uniform distribution of groups, as depicted in Figure 1. 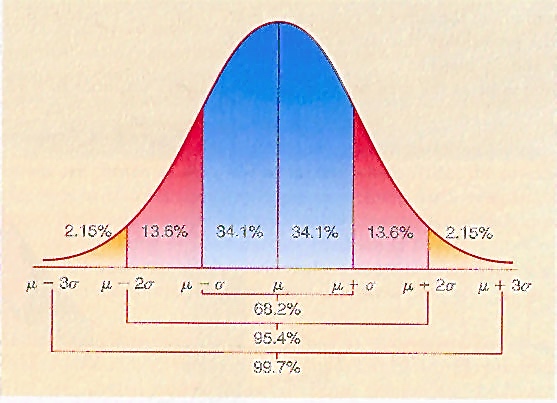 The electorate is essentially split, with 15 per cent on the more extreme right or left, and 68 percent in the middle, within one standard deviation.

Uniquely, because he is not a politician, Trump has focused only on that 68 per cent. This figure is also approximately the per centage of his vote in the primaries since Cruz and Kasich dropped out.

Trump also benefits from ignoring the 15 per cent on the left or right who represent the political fanatics. He said he wouldn’t need the conservatives in the Republican Party to get this far, and he’s been proven correct. After all, that particular group includes all the professional politicians who scare the 68 per cent anyway.

This majority doesn’t align with the conservatism of Cruz or the socialism of Sanders. They have been unrepresented because they are fiscally conservative but socially liberal.

Trump is not playing the duplicitous game played by professional politicians, that of pretending to be all things to all people. He speaks to the two root causes of the collapse of western democracies: corrupt politicians, and a corrupt mainstream media.

Western democracy is collapsing because a few professional politicians, aided and abetted by mainstream media, ignore the true majority of the people, not just the “50+1” majority.

The same is true (but worse) in Canada. We just elected a federal government led by a Prime Minister appointed by an elite few, in a party that got 39 per cent of the popular vote.

How many Conservatives did not vote? How many socialists, which includes many Liberals, NDP, and Greens, did not vote?

Trump identified a need and built a structure to fit the need, but then that is what developers do. The one politician who figured this out in Canada and is very successful as a result is Brad Wall of the Saskatchewan Party. For decades, Saskatchewan people voted conservative federally, but socialist provincially. Wall shed the traditional party baggage that had simply created a form of political bipolar disorder, and went on to victory.

The hope is that power, which he already has in abundance, won’t pervert Trump further for, as Alexander Hamilton said,

“A fondness for power is implanted, in most men, and it is natural to abuse it, when acquired."

The hope is that Trump is not one of the “most” men. Sadly, Hamilton’s contemporary James Madison summarized the larger challenge:

That is the view of the 68 per cent, too. Trump’s challenge now is to determine how much government is necessary, then prevent it growing.

“This majority doesn’t align with the conservatism of Cruz or the socialism of Sanders. They have been unrepresented because they are fiscally conservative but socially liberal.”

So, in other words, the principles which presently guide the American populace are: they don’t like debt, but they like libertine freedom? Is that true? When one considers both student loan debt, and personal debt in the United States, perhaps it could be just as easily argued: the people want free money and free love.

Not a great recipe. When the people ARE the problem, democracy (even populism) is in serious trouble, 68 percent or not.

They’re also unlike other conservative politicians in that they’re not particularly conservative. Trump, in particular, would be far more at home in the Democrats; the GOP was weak and he took advantage of it for an easier nomination.
Anonymous commented 2016-05-19 19:46:57 -0400
Trump, Rob Ford, are unlike other conservative politicians, who are adored because they stand/stood up for what they believe in, and were willing to take all the abuse and bullying from the left, mostly in the bigot card playing and were willing to fight back, which meant fighting back for their people.

Other conservative politicians – take the easy politically correct way out by avoiding at any possible situations that could cause the bigot card to be played, which is reflect in their fiscal and social policies.

Harper – cut needs to the Veterans, but not one nickel to failed multiculturalism and official bilingualism serving the entitlement of bilingual Francophones, full knowing the race and anti-French card would be played against him.

Trump is serving the people, other conservatives are serving themselves and throwing their supporters under the bus in order cater to political correctness
Anonymous commented 2016-05-19 19:37:26 -0400
Most people realize that civil rights laws will prevent Trump acting in an extremist politically incorrect measure, but won’t stop Clinton being equally as extreme in an equally harming politically correct measure because civil right laws only fight bigotry from the right, not the left
Peter Netterville commented 2016-05-19 16:41:18 -0400
I certainly hope Trump gets elected because the alternative, Hillary “the pathological liar” Clinton, is a death sentence for the USA.
Daryl Herman commented 2016-05-19 16:09:53 -0400
That’s exactly how it is, Adam!! Lieberalism is a mental disorder, plain & simple!
lawrence o'byrne commented 2016-05-19 15:25:29 -0400
i would vote for trump just to get rid of the elites who have corrupted real democracy while filling their own pockets and the politically correct nightmare of not being able to speak the truth and if you do they bring in hate laws to shut you up as turdo is doing in Canada and what seems to be paramount at this time is the insane perversion of catering to the transgender perverts to let them use any washroom they want and letting children at a very young age to determine their sexuality despite what they have for in their pants or on their birth certificate, this is what all the lefty elites have given us normal average Mr ,Ms or Mrs and all this crap is being supported by the courts in the US and Canada and now we have the conservative elites also supporting this crap just to get elected