This "teachable moment" is brought to you by Facebook CEO Mark Zuckerberg: 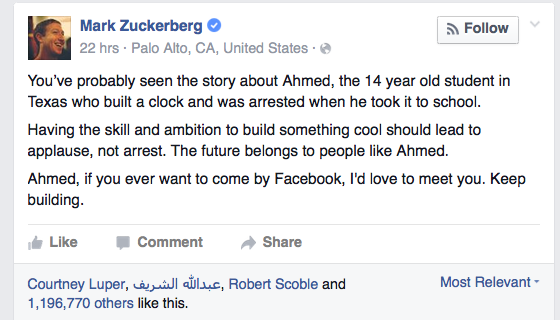 When Z-berg heard about a Muslim teenager in Texas who had been "racially profiled" as the result of a school clock project that was mistaken for a bomb (an honest mistake considering that at first -- and even second or third--glance, the contraption did look a lot more bomb-like than it did clock-like), the Silicon Valley "progressive" leapt onto his highest steed and posted the affirmation of the lad's efforts that’s quoted above.

As for me, I'm thinking that if I were a jihad-minded young'un and/or his extremist mentor, I, too, might see this as an opportunity to teach something meaningful.

Only my lesson would be this:

Bring a bomb to school disguised as project that you claim is really, say, a clock, or a slow-cooker or a trash compactor; proceed to blow everything up, secure in the knowledge that you'll be able to do so because school authorities will be too afraid to be accused of racism to alert the cops.

(Consider, for example, what could happen if and when a Dzhokhar Tsarnaev-wannabe brings his clock-like bomb science project to school.)

If that ends up being the infidels' M.O.-- giving every young Muslim "inventor" the benefit of the doubt out of fear of being labeled racist -- the future may not belong to people like Ahmed.

However, it could very well end up belonging to people named Ahmed (and Muhammad and Anjem and Ibrahim and Osama and...).

READ The Enemy Within: Terror, Lies, and the Whitewashing of Omar Khadr, Ezra Levant’s new book about domestic terrorism and radicalization.

That is why the story is so ridiculous to everyone else besides those that dream of getting married at Walmart.
Sam Young commented 2015-09-17 17:56:20 -0400
It’s just a matter of time until there is a law that bans the sale and possession of wind up clocks.

Here in Winnipeg, there was some lawyer who got her hand blown off when she pressed the play button on a voice recorder with a bomb in it. Ever since that incident, it seems like not a week goes by without the police getting a call on some suspicious package that turned out to not be a bomb. I just love how entire city blocks and bridges get shut down for hours for the police bomb squad to go investigate. I’d love to see the Rebel cover these stories.
Christopher Parker commented 2015-09-17 15:21:06 -0400
The same lefties applaud the police for taking down and charging a non muslim teeenager for having an airsoft toy in plublic.
Robert Manders commented 2015-09-17 15:12:42 -0400
It is just a clock until it is not. It was just underwear until it was not. It was just a shoe until it was not. They were just a couple of pressure cookers until they were not. It was just shampoo and conditioner until it was not. It was just a flight to London England until it was not. It was just a back pack until it was not. It is just a toy until it is not.
Ian Stephens commented 2015-09-17 12:52:27 -0400
Mindy’s right. There are a lot of people in authority who are ignorant of the fact that a bomb isn’t a bomb without an explosive material. Ahmed’s clock looked nothing like the movie bomb prop in Mindy’s video, yet that didn’t stop teachers, law enforcement, and really smart bloggers like Mindy from thinking it was a bomb or looked like a bomb. For this reason, we need to ban not only all electronics projects from schools that look like bombs but also anything which could be used as part of a bomb. This includes cell phones, tablets, cameras, laptops, pagers, pacemakers, watches (both analog and digital), and wall clocks. It’s sad to say that, because of “diversity” and “equality”, we can’t limit these items to white kids. An all-out ban on the above items and anything remotely bomb-like (with the word “bomb” on it, for example) is the only way to go if we’re serious about security in our schools.
Rick Matton commented 2015-09-17 12:51:25 -0400
Send Zukerberg one of these in the mail? "Hi Mark, I made you a surprise science project found inside this briefcase, please open this wonderful gift I made for you, thanks and enjoy
Audrey Grantham commented 2015-09-17 12:47:19 -0400
the little young fellow is Muslium….. I thought I saw somewhere that Obama has invited him to the White House. Of course this wasn’t a little white boy with the invitation.