As 2017 comes to a close, the left is pushing the narrative that it was the absolute worst year ever since Donald Trump was in office. That's why leftwing snowflakes were enraged on Wednesday when singer Taylor Swift took to social media to say that she “couldn’t have asked for a better year," a statement that resulted in the left slamming her for being "tone deaf." 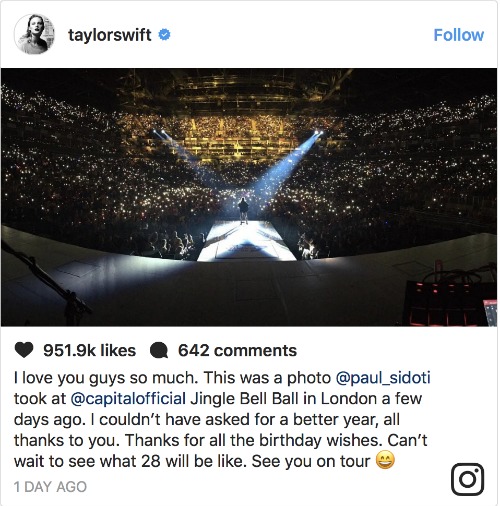 Somehow, this non-political post got quite a political response, as leftwing snowflakes took Swift's celebration of 2017 as an admission to voting for Trump, an act that they see as unforgivable:

The left literally thinks that we can't have anything nice anymore since Trump is in office! Just saying that you had a good year is now considered "insensitive" to the people who did not vote for Trump. Never mind the fact that those of us who did not vote for Barack Obama somehow managed to make it through his eight year presidency with a positive attitude without making everyone around us completely miserable. To the left, voting for Trump was unforgivable and him being office should mean the entire nation will be repenting for the next four years.

Swift has previously been attacked by fans for refusing to speak out on politics. Though she has never said which way she leans politically, fans have taken her silence to mean that she voted for Trump and tried to use that to publicly shame her. This is a sad example of the witch hunt progressives are on to find and destroy Trump supporters. Instead of trying to understand why people disagreed with their political beliefs and voted for Trump, they instead want to publicly harass and humiliate them for daring to cast a vote for the current president.

Sorry, left-wingers, but 2017 couldn't have been a better year for us as well!

You must be logged in to comment. Click here to log in.
Paul Taylor commented 2017-12-18 10:47:13 -0500
There’s nothing like watching the “snowflakes” have a meltdown. And for this reason 2017 was a good year. Let’s hope 2018 is a repeat.
Allan Peterson commented 2017-12-18 02:46:20 -0500
Always winter but never Christmas.
Terry MacLeod commented 2017-12-17 10:59:56 -0500
Deborah, so true. It’s not enough to be neutral anymore.
Deborah Graupner commented 2017-12-17 09:23:20 -0500
I think she’s an extremely talented song writer and singer! She’s been writing songs since she was in high school, with some of the best in the music industry. She’s a target because she hasn’t rolled over for the attack dogs, and her success and influence is impressive. The hate everything crowd wants everyone to spread their message and if you don’t comply the wolves are lying in wait to pounce!
Iain Foulds commented 2017-12-16 13:58:13 -0500
… Good for her! No fan of her work, but why would anyone alienate half their fans?
… Carrie Underwood smeared Trump at the CME and two days later fell and ended up in hospital. Lindsey Vonn smeared Trump, and fell in training days later ending her big career capping season.
… The world is so clearly dividing. God’s justice ever more obvious and swift.
Billy Howard commented 2017-12-16 12:27:53 -0500
I find Taylor Swift unimpressive and her music indistinct (but I’m not her demographic), however, kudos to her for not kowtowing to the alt-left zealots demanding clarity on her political beliefs. She remains near the top as a performer and influencer because she hasn’t dismissed a huge chunk of her fan base by openly siding with Trump or the globalist left. She’s far from your typically brainless pop icon.
Andy Neimers commented 2017-12-16 02:37:53 -0500
Lee Horsman – quote – “It’s entirely possible that Taylor Swift holds well thought out, intelligent opinions on politics but why on Earth would she want to make her views public knowing full well that in today’s hyper polarized political climate the only sure result would be losing the support of a big chunk of her fan base no matter what opinions she expressed?”… Hmmm… Maybe because she had the “guts” to do so??
Allan Peterson commented 2017-12-16 00:49:06 -0500
Forgot to include the Left’s theme song:
https://www.youtube.com/watch?v=bp6dsKleGpU
Allan Peterson commented 2017-12-16 00:46:33 -0500
OK, I’m just confused here. Is it Sunny ways or isn’t it? Well maybe not since every conceivable wrong (and some that the left has not conceived yet) has been righted. (Or is that lefted? Who knows they are so touchy about these things).

Until they bring in the Kingdom of Heaven (https://www.youtube.com/watch?v=oBucK8YQf08) we are morally obligated to have an Unmerry Christmas and a Miserable New Year.

Ah… life in Narnia. Where its always winter but never Christmas.

A Bah! Humbug! to every one.
Lee Horsman commented 2017-12-15 21:51:02 -0500
Hmmmmmm, lessee, when was the last time an entertainer expressed a political opinion that was worth hearing? I know it does happen from time to time but you know what they say, a broken clock is right twice a day.
It’s entirely possible that Taylor Swift holds well thought out, intelligent opinions on politics but why on Earth would she want to make her views public knowing full well that in today’s hyper polarized political climate the only sure result would be losing the support of a big chunk of her fan base no matter what opinions she expressed?
Whoever is advising her to clam up about politics is worth every dollar she is paying them.
Jan G commented 2017-12-15 20:44:22 -0500
Somebody, please, take these texting toys away from these kids and put them to work.
Tammie Putinski-Zandbelt commented 2017-12-15 19:09:06 -0500
Funny how leftist regressives begrudge a young pop star the opportunity to tweet a message about herself/ her life in 2017!