On December 3, 2016, the leader of For Freedom Denmark (formerly PEGIDA.Dk), Tania Groth, led a Christmas walk through an area of Copenhagen which voted not to have any Christmas decorations or celebrations due to the response of the large number of Muslims in the area.

Although the interview is in Danish, and not yet subtitled, you get a solid look at the amount of hardware Danish authorities felt was necessary to protect the Christmas march.

Last week, far left wing violent extremists spray painted PEGIDA Denmark's lawyer's office with vulgar graffiti and threw a fire hydrant into the window with the trigger taped down, so the fire retardant powder would ruin whatever it got into. 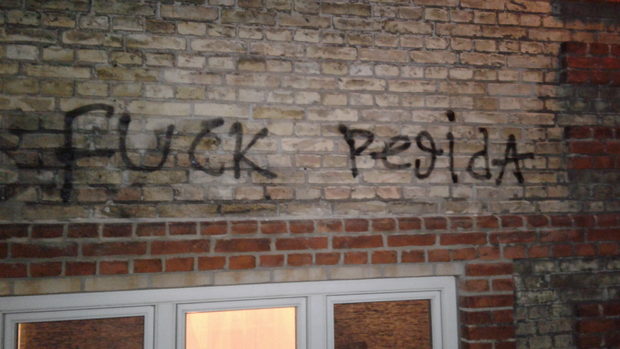 Here is a video taken by Local Eyes.Dk,

Here is a Ruptly video on today's event:

The cameraman had his car vandalized.

All out civil unrest would be at the top of that list.
Edward Moore commented 2016-12-05 07:08:33 -0500
And the icing on the cake will be Liberal government forever and ever increasing taxation.
Roger McAvoy commented 2016-12-05 06:28:55 -0500
This is what you get with a liberal Government willing to give the UN Saudi criminal network control over their Country, it has already happened here in Canada too, and we are to bring in over a million of these souls into our Country in the next few years or sooner, mass immigration is what it is… we didn’t vote for that.
Yvette Mozol commented 2016-12-05 01:15:58 -0500
This is what you get when sanity is thrown by the curbside & political correctness becomes the order of the day. Give them an inch & they will take a foot. The left elected are never able to foretell the consequences of their lousy vision, until it’s always too late. You hate to see this happen in any country, but until people wake up, they deserve what they get.
Joe Mac commented 2016-12-04 23:32:50 -0500
I sometimes wonder if this kind of civil violence is permitted so police can get overtime pay!! Why the hell is such violence and destruction tolerated?
Ron Voss commented 2016-12-04 21:59:23 -0500
Unbelievable, a war zone. And Trudeau probably thinking he would love to have that happen in Canada.
Peter Netterville commented 2016-12-04 17:35:37 -0500
@ Drew

Yes, Jay Kelly only calls for tolerance and acceptance of those that habitually practice violence and hate, so you won’t see him post a comment in support of the Christians.
Drew Wakariuk commented 2016-12-04 16:44:34 -0500
Jay Kelly where are your calls for tolerance and acceptance now? Oh right , they are only for one side.
Drew Wakariuk commented 2016-12-04 16:43:25 -0500
Wouldn’t it be so DAMN NICE if we could just leave the useful idiots to live with their masters, let them have their wish without it affecting the rest of us.
james ginn commented 2016-12-04 15:17:58 -0500
Fight to the finish…thats where it will end.
Keith Barnes commented 2016-12-04 15:04:10 -0500
To all Right thinking persons. Tis time to take up your Swords and Shields and Lances, for we need to teach the Traitors amidst us, a lesson in Loyalty to their Country and their Queen.

Hanging, Drawing and Quatering a few of these malcontents shall be a good lesson for them.

Let them have their Cake and eat it.

(In the middle ages ‘Cake’ referred to an inferior kind of Bread)
Allan Peterson commented 2016-12-04 14:57:34 -0500
Right you are Roger. Same thing about the US of A. They have done many things wrong but who would you rather have sharing a 4000 mile border?
Roger McAvoy commented 2016-12-04 11:57:55 -0500
The liberals would have the world think that Christians eat their young and commit violence against anyone that does not conform, all the while in defense of the religion that actually does in fact do these things.

Either except it or fight to change it, we in Canada have to force a referendum on many issues, including a no confidence vote for the current corrupt Government.

The time will soon come when we will not have the choice to change anything… our freedoms are being taken away as we speak so if we don’t use our rights soon we will never be able to…
Lloyd Nolan commented 2016-12-04 10:26:16 -0500
So white liberal Vikings are running interfearance for the Muslims , just like over here
George Luck commented 2016-12-04 10:15:08 -0500
Violence has always been seen as an acceptable tool of political change by the left. It should be no surprise to see it used here as well. When their ideology has been rejected by the masses, liberals always resort to violence to attempt to have their agenda forced on the public. From communists, to Nazis, to modern day socialists, it never changes.
Peter Netterville commented 2016-12-04 08:37:40 -0500
Shebel Jaj said, “It is pretty bad when a gov’t needs helicopters and armored vehicles to keep the CHRISTIAN elements of Society in check.”

Please tell everyone here that you understand the difference.
Peter Netterville commented 2016-12-04 08:33:29 -0500
It is always the hateful left wing that are violent and threatening. ALWAYS