Director Colin Trevorrow is the latest target of the Twitter outrage mob, but it's not for stealing jokes. Instead his sin appears to being successful while in possession of a penis.

Trevorrow's career is being touted as an overnight success story, ignoring the fact that he spent well over a decade struggling to get things made before he finally was deemed employable on a major gig with the offbeat and critically acclaimed sci-fi film Safety Not Guaranteed. That film got him the gig on Jurassic World, and Jurassic World went on to make over $1.6 Billion at the box office, and that led to him getting signed to direct an upcoming Star Wars movie for Disney.

Naturally when someone explodes into success like that there are critics who imply that Trevorrow's success isn't due to his hard work, that he had some sort of privileged "in" with the industry. In the old days that alleged "in" was a rumoured relationship with someone high up, be it familial or sexual, but these are modern times, and the critics now say it's all about gender, which one you have, and which one you would like to have sex with.

Overnight Trevorrow went from indie darling to twitter's favourite cisgendered boogeyman who only gets the big jobs because he has the correct genitalia.

When asked directly on twitter Trevorrow made a horrible mistake, he tried to defend himself: 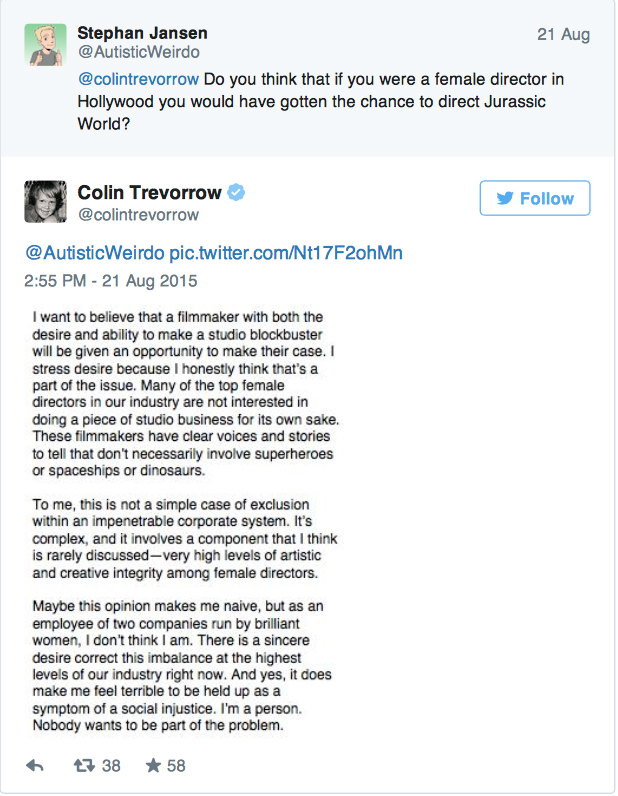 Now some say that Trevorrow chose the wrong words, but let me explain something about crises like these:

THERE ARE NO RIGHT WORDS.

Nothing he can say or do, short of announcing that he's quitting Hollywood to join a monastery in Tibet, and can somehow magically force all the jobs he's signed for, and will ever would be signed for will now go to women directors, whether they want to do those jobs or not.

Now I'm not saying that Hollywood doesn't have a gender problem.

It does have a bad gender problem.

When Sandra Bullock, who is a pretty reliable box-office player, capable of carrying a dead weight like George Clooney into blockbuster land, has a hard time finding a decent role, Hollywood has a gender problem.

The problem's roots are not a bunch of men sitting around a conference table saying "How many qualified women can we deny employment this month?" If it was, then it would just be a matter of getting around or rid of those guys.

Only the problem is more complex, and the solutions aren't coming because of these major problems:

1. THOSE IN POWER DON'T SEE THAT THEY'RE THE PROBLEM.

Imagine that you're a studio mogul and you hear that not enough women are working in Hollywood your first thought will be: "Those other guys must be horribly sexist." That's because you can't conceive that you might contribute to the problem in any way. There are lots of women working in your office, you might be a woman yourself, you also hold fundraisers for the correct candidates and the correct causes, and you vote for the correct candidates. There's no way in your mind that you can see that you're causing this inequity, and you won't hear it from the critics because...

2. THE CRITICS PICK ON THE WRONG TARGETS.

Now Colin Trevorrow did not hire himself to direct Jurassic World. He was hired by Stephen Spielberg's production company and Universal Pictures to direct the movie.

So why is Trevorrow the target of so much anger and blame?

Because Trevorrow is essentially powerless when it comes to people's careers. Amblin and Universal are not. If they're doing a Google search on a female director they're considering hiring and find her bad-tweeting them as sexist pigs, they're not going to hire that person.

However, if they see her picking on some other hired gun, then it won't matter to them, because unless they're mentioned by name, they can't imagine that they're involved in any way.

3. NO ONE TAKES INDIVIDUAL CHOICE INTO THE EQUATION.

Trevorrow's defence mentioned cases of female directors turn down the big monster and superhero heavy blockbusters the studios are dependent on, and he might be right.

I don't know, and you don't know, because neither of us can read the minds and souls of other people, and fully understand why they take or turn down jobs.

It's the same problem with the whole women are paid 75¢ for every $1 a man is paid. People are led to believe that a female teller is paid less than a male bank teller with the same seniority because he gets a magic 25% penis bonus.

The inequity in incomes comes from the simple fact that it encompasses all occupations. That means that the women who choose to take a lower paying retail or office jobs over the high paying, but dangerous male-dominant job of Alaskan oil rig roughneck because they don't want to give up a few fingers for cash, are skewing the results.

4. ALL THIS ILLOGIC MAKES HOLLYWOOD A TERRIBLE OFFENDER.

Ironically, Hollywood who is a big proponent for the 75¢ myth is the one workplace where actresses actually are paid less and have a smaller choice of roles than actors of equal box-office appeal.

So what can be done?

Well, many moons ago I worked out a formula to determine star power, and thus the appropriate salary, and it'll solve this problem, because it doesn't include genitalia in the calculations.

B.O.S.S. stands for "Bums On Seats Status" or if you want to be more scientific sounding "Box-Office Sales Status" and is a fair and accurate assessment of what a movie star's real box-office appeal is.

So here is how you do it.

A: This is a percentage of how many profitable films the star has been the lead in for the past 5 years.

Don't go by the studios profit/loss statements, they contain more fiction than a Barnes & Noble superstore.

For the purpose of this formula you take the production costs of the film, double it, and add $30 million. This will give you a rough estimate of the total costs of the film, including prints, marketing, distribution as well as the theatre's piece of the action. If the box-office take is more than this amount, it's profitable, if it's less, it's a money loser.

B: Now this is the only part of the formula where market surveys are used. You do a poll of average moviegoers about the star in question and take the percentage of people who say that they would pay to see that star in a movie, and deduct 90% of that value.

I call for the chopping of the 90% because the majority of people who answer the poll are just being polite, or so lonely they will talk to anyone and say anything to keep the talk going.

Trust me, I know how wildly inaccurate they can be having been involved with a clever sketch comedy pilot that was bastardized into a sitcom about mischievous angels based on a cream cheese commercial because of market research.

C: This is a percentage of movies that have been negatively affected by the star. Now this can be interpreted in several ways. The most concrete involve profitability lost due to the over-sized salary or unprofessional behaviour of the star in question. A star who drives up the budget isn't really worth it.

Now you add all that up together and you should get a score between 1 and 100, you then compare that score to this easy to read chart.

SCORE 0-10: This actor's next role should feature the line: "Do you want fries with that?"

SCORE 11-30: This actor might be okay cast as a wacky neighbour on a sitcom on the CW network.

SCORE 31-50: This star could be either on the way up, or on the way down. Stick to supporting roles in big-budget projects, leads in small budgets.

SCORE 51-70: You can call this person a "star" but unless you have a good script and a good director making a good film, it will still be a bit of a crap-shoot. They should get good money, but not so much that it cripples the budget, and points only if they are willing to take a cut in the up front money.

SCORE 71-90: The word 'bankable' might be used now. They have the charisma to sell a picture, and may even be forgiven the odd stinker or two, but you shouldn't push it too far. They should get good money, and a modest points deal.

SCORE 91-100+: These actors can sell out a theatre with dramatic readings of the Peoria Illinois phone book. They are worth every penny they can get, and a heap of points too because you're going to be swimming in money like Scrooge McDuck on a meth binge.

My solution can be adapted to handle hiring behind the camera as well, and it leaves gender out.

Which means it will never be used.