A college professor has found himself a target of Antifa simply for trying to help host a free speech debate on his campus. 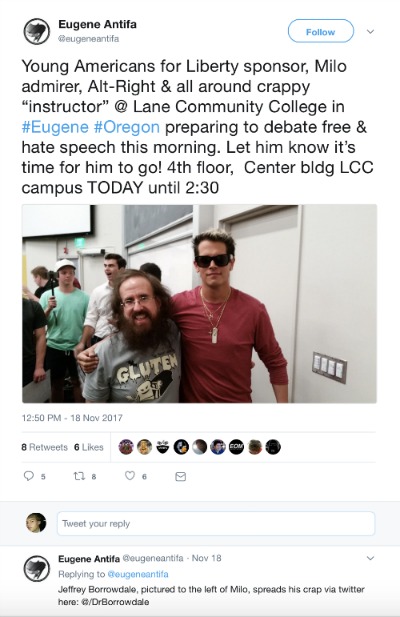 A flier for the event that offended Antifa, "LCC Speak Out," makes it clear that this event is not an attack on anyone and is merely meant to be a thought-provoking debate on the concept of free speech. 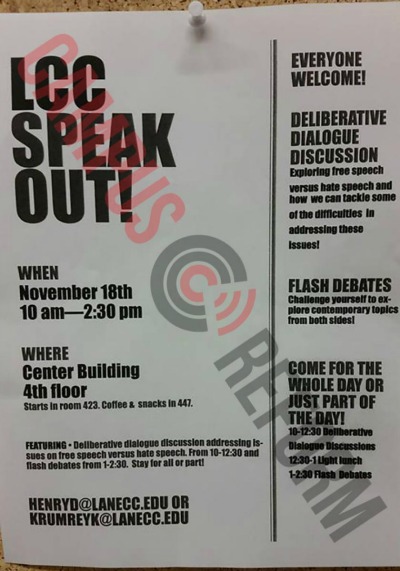 Borrowdale said that Antifa activists have been targeting him for some time.

“They've been trying to incite students against me since last Fall when someone found the picture I took with Milo on Facebook,” he told Campus Reform. “So far they've just been posting intimidating messages on Twitter. Someone's also been taking down the fliers for Young Americans for Liberty, a student club I advise for.”

“In the Winter, the Eugene Antifa Twitter account started with the threats,” Borrowdale divulged. “They said I ran a right-wing front group and urged their members to infiltrate and disrupt our meetings, giving the day and time and my office number and phone.”

It's sad that a member of a college faculty can be harassed by Antifa protesters simply for helping out with a debate on free speech. The left has already succeeded in making sure that most college students are leftists, and that those who aren't are too afraid to speak out about their views. Now, they have moved on to their next goal: targeting professors who champion free speech.

A professor like Borrowdale is a threat to Antifa activists and the group's agenda because he is clearly someone who wants to encourage students to think deeply about issues and to see them from both sides. It's not clear where Borrowdale leans politically, but he is open enough to both sides to want to see a healthy debate between. In contrast, Antifa sees conservatives as "evil," and people like Borrowdale as "enablers" who must be silenced.

You must be logged in to comment. Click here to log in.
Muta Ween commented 2017-11-26 14:12:04 -0500
There is nothing like the real world to deflate the minds of these university students. Spend a week in Venezuela where Chavez promised free everything and promised to free the people from the one percent and the multinational corporations. Same old Marxist rant.
Now the grocery store shelves are empty ,every service is limited or non existent and health care ? Forget it. And if you complain you could get shot.
Wearing boots to under the boot of Marx in a decade.
I hate the words progressive and social democracy . Mendacity. It’s communism light and once inflicted upon the masses it only leads to destruction and death.
William Elder commented 2017-11-25 19:57:09 -0500
Antifa are deranged snowflake Bolshiviks they are a self-correcting anomaly – why free speech needs “debate” on campus shows how that institution is failing students – without free speech, democratic will and governing would not exist and radicals like antifa would be in gulags just for their words.
Stephen Eisenberg commented 2017-11-25 13:02:05 -0500
Yep, Antifa definitely not living up to what its name implies. Far from being antifascist. The Brown Shirts and Black Shirts would be proud of them. They have essentially defined fascism as anything or anyone who does not agree with their view of right-think.

Their behaviour keeps crossing the line between acceptable debate and disagreement into the realm of social terrorism. Once they use violence, threat, targeting of individuals and events they become outlaws. When will they be treated as such? Simply because they (appear to be) supported by CNN, MSNBC and such does not mean their behaviour is acceptable by any sane metric.

One or two mass arrests at a “demonstration”, hauled off to a stadium, have their masks removed, photograph and finger print them, check their ID for outstanding warrants, and press charges on the ring leaders for causing a riot and civil disobedience might wake some of them up. For the rest who haven’t been caught damaging property give a warning that they participated in a riot, meaning that next time charges may be brought forward; that might make some think (hopefully) twice next time.

Most countries won’t let anyone in who has a criminal conviction. If convicted, that is it for travel abroad. I bet they will call every country that deny them entry fascists, always falling on deaf ears.

Of course they will call the police Nazis and fascists, but so what. Once photographed and finger printed, you might say “we know who you are”. Any background check by a potential employer might get them looked over for a job.

Violence and treat must be addressed. This must have repercussions.
Andy Neimers commented 2017-11-25 02:03:13 -0500
Not surprised that happened in Eugene which is part of the “nutbelt” from California, stretching north into Portland and on to Olympia and Seattle… Eugene is on the west side of I-5… Real Oregonians live on the east side of the Interstate… Very much the same way that B.C. is split…
Drew Wakariuk commented 2017-11-24 22:49:46 -0500
Eugene Antifa , now there is the name of a someone who has never kissed a girl (or boy) before.
Dan Mancuso commented 2017-11-24 19:12:50 -0500
If ya know ‘thegovernment’ protects and supports racist bullies and thuggish bigots like antifa, BLM, radical feminist and Islamic cultists, and their attacks against free speech…then ya know that peaked caps, jodhpurs, black leather riding boots, special uniform insignia and accessories can’t be far behind…knowing history, and the left! The rotten bones are trembling…

Es zittern die morschen Knochen,
Der Welt vor dem großen Krieg,
Wir haben den Schrecken gebrochen,
Für uns war’s ein großer Sieg.
https://en.wikipedia.org/wiki/Nazi_songs
Tammie Putinski-Zandbelt commented 2017-11-24 16:59:46 -0500
They are domestic terrorists who should be treated as such. I refer to them as feral, violent socialists. Daddy Soros uses them, and he belongs in a jail cell with all of his assets frozen so his sons & Robert Alex cannot work on their father’s behalf; and all plots are stopped dead in their tracks.
Kameron Cuk commented 2017-11-24 16:41:08 -0500
Antifa and all of its members need to be arrested and charged to the fullest extent of the law for harassment, violence, and treason. And if we are lucky, most of them will get thrown out of their parents basement and actually have to find a job to live!
Iain Foulds commented 2017-11-24 15:39:36 -0500
… Violence, disrespect, bullying, hate, mob rule, and smearing others are the tools of the neo-barbarian Left. They are truly the Neanderthals of our time, emerging from their caves to destroy our society.