The Rebel's Vancouver team interviewed an oil worker named Bernard Hancock at a Kinder Morgan protest. The interview went viral. Bernard's articulate and passionate defence of Canada’s resource industry really struck a chord, so we decided to continue speaking with him.

You can watch all of the Bernard content on The Rebel below. Watch to hear Bernard speaking about why the oil industry is so vital, what it means to him and all Canadians, and learn about Bernard's hopes for the future of the industry.

Bernard the Roughneck goes to Ottawa!

No, he's NOT an actor: Bernard, the outspoken roughneck has a NEW message for anti-pipeline protesters

The Rebel caught up with Bernard to ask about the reaction he received and get his thoughts about why he thinks his message resonated with so many people.

"What, you thought this was a wig?” - Bernard, Canada's favourite roughneck on Rig 45

After our interview with Bernard went viral, we found him again to ask about the reaction he received. The feedback was mostly positive, but many accused him of being an actor. So Bernard filmed this short clip of himself hard at work on an oil rig, proving he’s the real thing. Shattering all stereotypes.

FULL interview with Bernard the Roughneck: "Power of the internet is incredible!"

You can now order your very own Bernard the Roughneck t-shirt!

It has a simple message, "I'm with Bernard" the well spoken Canadian roughneck, who is fighting for the oil industry. Order a t-shirt by clicking here or on the image below and show your support of Bernard! 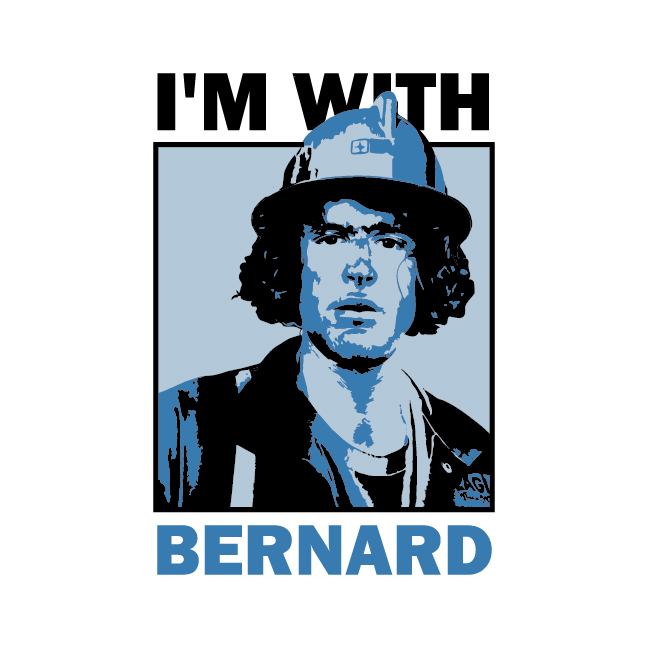 You must be logged in to comment. Click here to log in.
Shawn Alain commented 2016-09-28 00:25:28 -0400
Check out this really disgusting comment about Bernard from Terri Gergely, the Human Resources Admin for the City of Lethbridge. It’s just disgusting how people would attack this hard working roughneck, instead of championing the message he is giving. So many Alberta families owe him a debt of gratitude for the crap he is going through from people like Gergely. But I guess business is booming for HR Admins as the size of our government expands. It’s only HR Admins for private businesses that are having to lay people off. https://www.facebook.com/albertacantwait/posts/1653114381666391
Lauren Weber commented 2016-02-28 16:46:52 -0500
Hang in there, Bernard. Hoping and praying that times get better, and you and your colleagues can get back to work soon!
judith schuett commented 2016-02-27 10:32:46 -0500
Good thing you have a photo on the T shirt…someone might think you were cheering on Bernard Sanders ☺…

NO?…oh…he was the guy telling us to pull ourselves up by the bootstraps.

Got some advice for him…
Paul Taalman commented 2016-02-20 22:34:07 -0500
Ezra…make Bernard a regular. He’s articulate, informed and a Patriot (that new four-letter word in our vocabulary). He’s a Canadian’s Canadian. I can,’t believe how duped people can get. Common sense has flown out the window. Bernard speaks common sense.
Paul Taalman commented 2016-02-20 22:25:18 -0500
You go Bernard. There are a lot of hardworking patriotic Canadians with you brother!
Brian Palmer commented 2016-02-20 21:48:48 -0500
I hear ya Bernard! I even have family that seems to be disgusted and surprised that I’m still working in the oil industry, and yes, they are NDP and Liberal supporters…Oh, and out of work too and asking for handouts…? I am sick of trying to explain the situation here in Alberta and the effects on the country as a whole.
One thing about pipelines I have never heard floated is that they get old and inherently fail over time no matter the mitigation programs we put in place as an industry. So do we just NOT replace lines to meet demand and replace old ones? We have THE BEST environmental policies in the world for developing, refining and transmission of this product.
That being said…sweet black crude is just fertilizer…spread it on your lawn or flower bed and see what happens, I dare you! Also for the morons out there who believe the oil sands are leaking into the local rivers…DUH!! Yes they are and have been for many hundreds of thousands of years. It is how we found the sands in the first place)))
Hollywood and it’s cronies…go suck an egg! Talk on your own industry, not one you know absolutely nothing about…get out of my back yard!!!
christine warner commented 2016-02-20 20:55:27 -0500
God bless you Bernard. Real men fight evil while cowards shake in their boots. Keep fighting with words of truth !!!!
Andre Lauzon commented 2016-02-20 20:21:57 -0500
Keep fighting Bernard, you have more friends than you know. It is not everyone who has the opportunity to be heard by Canadians…………but we listen.
dave grohn commented 2016-02-20 20:13:12 -0500
i am glad that in this day and age we are able to give a voice to guys like him. there are more guys like him around Alberta in all different fields of work that are just as important as oil and gas. the only retards that should be criticized should be anyone from the left. we need to go on a witch hunt after them and hang them up by their underwear and stuff them in lockers just like the bullies did in high school.
Jerry Crossman commented 2016-02-20 20:01:30 -0500
What needs to be done is we need to explain to the pin heads what environmental policies go into building these pipelines for example any oil or gas spill is immediately cleaned up and reported I’m talking less then a liter. pipelines in the past few decades in Canada compare to no other country in the world Canadian pipelines are the most stringent from safetey, environmental, and quality control standards we in Canada are second to none in the world
Sandy Wilde commented 2016-02-20 19:36:07 -0500
I’d be proud to have Bernard as a son. He is a well-spoken, passionate, hard-working young man – a real Canadian. I’d love to hear more from him.
Merrill Meikleham commented 2016-02-20 19:18:43 -0500
Bernard for Prime Minister!