1. President Obama kept list of Muslims for top jobs, even excluding Arab Christians, confirming suspicions that he may have a bias for Muslims.

According to an email chain from 2008, John Podesta received lists of exclusively Muslims and Asians to be considered for jobs in the Obama administration. The email chain revealed that in this process, Middle Eastern Christians were purposefully excluded, or set aside in a separate list, with an aide writing,

'In the candidates for top jobs, I excluded those with some Arab American background but who are not Muslim (e.g., George Mitchell). Many Lebanese Americans, for example, are Christian. In the last list (of outside boards/commissions), most who are listed appear to be Muslim American, except that a handful (where noted) may be Arab American but of uncertain religion (esp. Christian).'

2. For those who have seen Viktor Orban's extraordinary speech yesterday, a rather stark contrast can be seen here where Angela Merkel blames the German people for her policies of national suicide.

To get an idea of general media treatment of non leftists, watch this Euronews clip of Orban's speech yesterday, where the voice over actually says it was to commemorate Hungary's 1956 communist uprising.

In fact, it was the 60th anniversary of the beginning of the Hungarian revolution against the Soviet communist occupation of Hungary.

It is nice to see a person in a position of public authority saying something true for a change.

In the book, written with journalist Thomas Larsen, the Danish queen says that some immigrants and refugees have failed to properly integrate into society.
“It’s not a law of nature that one becomes Danish by living in Denmark. It doesn’t necessarily happen,” Queen Margrethe says.

The queen goes on to say that certain groups of people are better at integrating than others.

One might even dare say that living in a country is not an accident of geography but a shared set of values, usually codified in law. If you do not accept the general premises of the law, then you are not a member of the group in that country.

It is also a shame that this needs explaining.

4. The kinetic conflict in Calais France continues, with tear gas, rocks, fireworks and any improvised weapons and shields the migrants can use against the police.

5. ‘Expert’: Give Syrians Their Own City in Germany To Prevent Radicalisation.

A left wing expert on Salafism has suggested that Germany has no real culture and that Syrians should be allowed their own city rather than be forced to integrate into German society.

Expert on Salafism and Green party member Kurt Edler is proposing a radical idea on how the German government should handle the integration of Syrians and other migrants into German society.

English Canada has been told we have no culture since the last Trudeau was PM. We should warn the Germans what comes next.

6. Outrage as poster mocking age of child migrants from Calais found in Parliament.

There has been a great deal of news recently about how large numbers of migrants in the wave from Islamic nations, have been misrepresenting their age to be much younger to get more rights and benefits as "child refugees".

A POSTER mocking the debate on whether the ‘child migrants’ arriving in the UK from Calais are actually children has sparked outrage after being posted in Parliament. 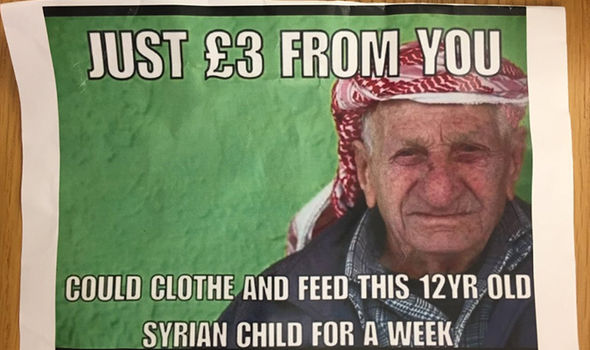 Last week Britons fiercely debated whether or not dental checks should be carried out on those sent to the UK from the ‘Jungle’ camp to be with their families.

The Home Office said a test would be ‘inhumane’ but Tory MP David Davies collected huge support when he said their ages should be scientifically established.

(This might be an excellent time to watch John Robson's video on when a Roman emperor banned pants.)

Steven Blaney, the latest Conservative to throw his hat into the party’s leadership race is planning to reignite the effort to ban niqabs at polling stations, during citizenship oaths and for federal public servants.

His will to ban the religious garb is so strong, he “will not hesitate” to take the unprecedented step of overruling the Supreme Court of Canada should it rule against federal legislation banning the niqab.

8. Migrants in the Moria refugee center on the Greek Isle of Lesbos are also setting fire to their own domiciles in protest of not getting everything they want.

In a controversial speech the far-right MP claimed European populations had been fed “propaganda” over asylum seekers and made the unfounded claim that most of them are not fleeing war in Syria and Iraq.

Addressing supporters, the Front National (FN) politician claimed that migrants were being given “preferential” treatment for houses and jobs over impoverished French citizens.

This is also true in Germany:

10. 'Mummy's boy' held over Tube bomb plot 'read the Koran': Loner, 19 quizzed following discovery of a 'suspicious device' at his Devon house after a 'viable' homemade explosive is found on a Jubilee Line train in London.

A baby-faced poker fanatic and 'mummy's boy' was today revealed to be at the centre of a major counter-terror investigation into a crude bomb left on a Tube train.

The investigation took a dramatic turn when officers in Newton Abbot, Devon, raided the former home of Damon Smith, 19, and found a suspicious device.

He was later named as the suspect being questioned by police investigating the device found and blown up by anti-terror police at North Greenwich in London last week. [...]

Friends said Mr Smith was interested in Islam and the Syria conflict, and had recently begun reading the Koran.

The Daily Mail article continues to describe other aspects of his life. But winning at online poker is not known to motivate someone to try and bomb a subway. Islam however, most certainly does.

You must be logged in to comment. Click here to log in.
Allan Peterson commented 2016-10-26 00:32:09 -0400
A decline in courage may be the most striking feature that an outside observer notices in the West today. The Western world has lost its civic courage, both as a whole and separately, in each country, in each government, in each political party, and, of course, in the United Nations. Such a decline in courage is particularly noticeable among the ruling and intellectual elites, causing an impression of a loss of courage by the entire society. There are many courageous individuals, but they have no determining influence on public life.

Political and intellectual functionaries exhibit this depression, passivity, and perplexity in their actions and in their statements, and even more so in their self-serving rationales as to how realistic, reasonable, and intellectually and even morally justified it is to base state policies on weakness and cowardice. And the decline in courage, at times attaining what could be termed a lack of manhood, is ironically emphasized by occasional outbursts and inflexibility on the part of those same functionaries when dealing with weak governments and with countries that lack support, or with doomed currents which clearly cannot offer resistance. But they get tongue-tied and paralyzed when they deal with powerful governments and threatening forces, with aggressors and international terrorists.

Must one point out that from ancient times a decline in courage has been considered the first symptom of the end?
Alexander Solzhenitsyn
Harvard University 1978

Robert Raymond commented 2016-10-25 09:20:28 -0400
LePen says French citizens should come first. In Canada, Canadian citizens who have contributed to the country should come first!
As well, I have been told that someone from the UK seeking to become a citizen of this country by legal means has been applying in vain to obtain legal citizenship.
He has yet to obtain any legal status and wothout this cannot get a social insurance number. Without the SIN, he cannot legally work.
He has been trying by LEGAL means for 3 years without success . . . meanwhile the Islamic hordes are being processed post haste.
There seems to be a double standard here.
White, Anglo, francophone, European, Christian . . . WAIT and WAIT.
Islamic middle easterner . . . INSTANT citizenship, medical care, dental care, psychiatric care, jobs, food, lodging, mosques, welfare and legal advice.

No wonder we are taxed to death!