Over half of Americans believe hate speech is an "act of violence," according to a new study by the Cato Institute.

We find that Americans believe free speech has both benefits and costs. First, nearly two-thirds (67%) think that “freedom of speech ensures the truth will ultimately win out” and 58% say free speech does more to protect minority viewpoints. But also, most believe that speech can turn violent: 53% say hate speech is an act of violence and even more say that hate speech leads to violence against minority groups (70%). Ultimately, a majority (56%) think it’s possible to both ban hate speech and still protect free speech.

There are wide racial and partisan divides over how people think free speech operates. Democrats, African Americans, and Latinos are more likely than Republicans and white Americans to believe that hate speech is violent and allows majority views to crowd out minority viewpoints, that supporting a racist’s free speech right is as bad as being a racist, that people who offend others with their ideas have bad intentions, and that we can simultaneously ban hate speech and protect free speech. 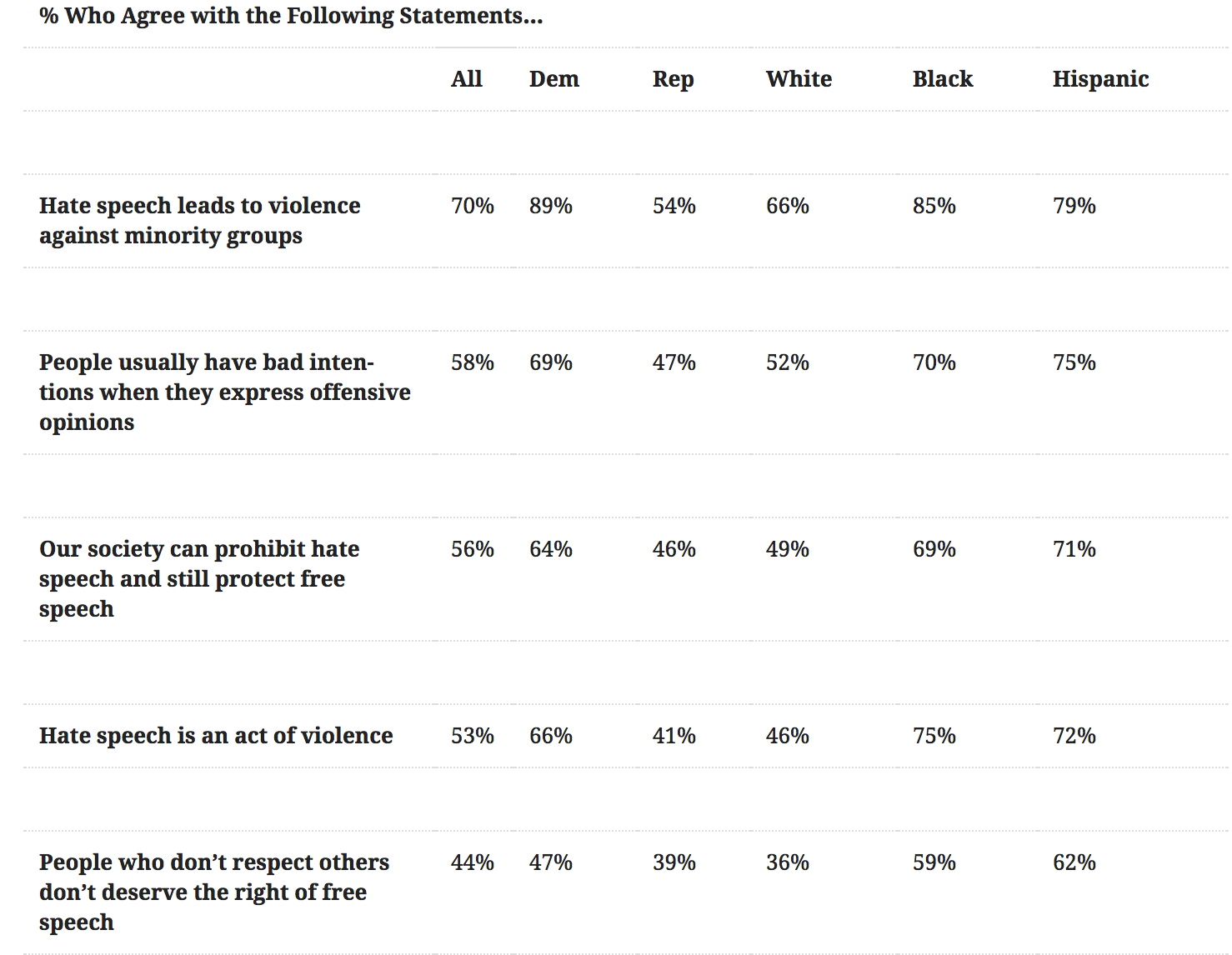 It's troubling that over half of Americans believe that society can both "prohibit hate speech and protect free speech." As Cato notes, the issue is most likely that "hate speech" can often be an amorphous idea with varying definitions. For example, many on the left believe that rhetoric used by President Trump to describe illegal immigrants constitutes hate speech.

According to the study's respondents, if such stated beliefs truly are hate speech, then they should be restricted. Otherwise, it could lead to "violence against minority groups."

Citizens in countries like Canada, or the UK for example, are subject to far more onerous speech laws than in the United States. The First Amendment gives United States citizens unique freedoms that should be cherished. To think that over half of Americans want those freedoms infringed upon suggests a naive populace that doesn't fully appreciate the rights granted by free speech protections.

You must be logged in to comment. Click here to log in.
Tammie Putinski-Zandbelt commented 2017-11-05 12:07:32 -0500
Jay Kelly, take a moment to view Gad Saad’s commentary. Very good lessons you can learn.
Thought Police and Political Correctness in Modern Academia (THE SAAD TRUTH_133)
https://www.youtube.com/watch?v=yUenfvhOdwc
Edward Jobin commented 2017-11-05 10:15:54 -0500
Let me put it to you this way Jay: Would you rather someone raped you with their wit or physically raped you? Think long and hard before you break anyone’s bones. LOL
Edward Jobin commented 2017-11-05 10:05:45 -0500
Jay what a dry colorless world you are describing where everyone walks around with their nose in the air looking to get offended and no one can take some light ribbing. Kind of sounds like those 53% might feel more at home in Iran where their religious leader assures us there is no place for humor in Islam.
Drew Wakariuk commented 2017-11-05 02:38:58 -0500
Jay Kelly NO! They have a right to their opinion.
Jay Kelly commented 2017-11-05 01:12:28 -0400
“Sticks and stones may break my bones, but words will never hurt me.”

But we know from our own experience that words do hurt. In fact hurtful comments can be more painful than a physical attack.

As a sort of defensive mechanism some will claim that the physical attack was more serious than the mental one.

53% of Americans are right. ‘Hate Speech Is an Act of Violence’
Edward Jobin commented 2017-11-04 12:30:41 -0400
Jay Kelly: You can’t protect people from the totality of life. I would like to see the bullying in schools stop but after years of talking about it and talking about it we seem to be no further ahead. If persistent constant verbal abuse goes on people can take steps to stop the harassment but there is no way to legislate people from never saying anything mean and it all comes down to who defines what is mean? But to try and prevent people from living in the real world when the child leaves the protective barrier of the over protective family and finds out the real world can be hard and you have to develop a measure of toughness or you are going to get crushed and won’t have learned any coping mechanisms.
Tammie Putinski-Zandbelt commented 2017-11-04 11:51:15 -0400
Excellent post Laurence Coakley!
Laurence Coakley commented 2017-11-04 11:01:38 -0400
If the psychological (thought and feeling) state or condition of ‘hate’ could actually be be legislated away (it can’t) governments would likely begin to add other psychological states or conditions to law. Then no longer would a person’s unacceptable physical actions and conduct be the State’s sole concern for such legislation (as it ought to be).

To legislate against what some describe as hateful words or hateful speech is to legislate against a person’s psychological state or condition. Really, ought there to be criminal or highhanded civil laws which prosecute a person for having a particular psychological state or condition at any given time. States or conditions such as: to experience “intense dislike; feel antipathy or aversion towards” aka “hate”; or to experience “strong sexual desire, passionate desire, eagerness to possess, intense longing” aka “lust”; or to experience “hot displeasure provoked by some action, incident, situation, etc.” aka “anger”; and on we could go. Ought there to be laws against these. If so, where would or should we draw the line. Which thought and feeling might be next on the chopping block.

If wanting to change people’s hearts and minds there are much better courses of action which could be taken (continued sharing of truthful information and honest education; providing opportunity for open discussion and debate; providing “safe spaces” ;-) for venting – whoops, how’d that get included) than to have the government passing laws to make illegal a person’s thoughts or feelings. To only be “permitted” to hold particular thoughts and feelings inside one’s own head or heart but never be allowed to give outward spoken or written expression to them, because someone may be offended or perhaps emotionally feel hurt, is, to me, oppressive, and is often used to silence detractors (not everything is worthy of or deserves praise), stifles debate, and runs contrary to freedom of expression.

Do you believe that hateful words can be considered acts of violence? If someone punches you in the gut it is rightly and obviously an act of violence. But what about the hateful words? My impression is that the words can be more hurtful, and leave more lasting scares, than the punch.

We might try this little test: When was the last time, or were you ever, the victim of violence. “Violence” meaning a hurtful, painful, or demeaning act against you. Something that really hurt you as a person.

Chances are the event was not a physical attack, but a verbal one. Chances are it was carried out by someone close to you, someone who you trusted or even loved.

The pain comes not from someone out of the blue hitting you with a hammer, we can get over that. The pain comes with someone pointing at you and saying “I know you. You are worthless.” It hurts.
James Hala commented 2017-11-03 20:47:15 -0400
Everywhere in today’s overpriced worthless universities throughout the Western world any uncomfortable truth is labelled " hate speech"
James Hala commented 2017-11-03 20:44:00 -0400
I
Keith Barnes commented 2017-11-03 18:06:15 -0400
Mind Control, the dream of every Politician, especially those who stand with Sad Sack Trudeau and his Marxist Marauders.
Billy Howard commented 2017-11-03 17:32:39 -0400
The only “hate” speech that should be restricted is that which calls for violence against certain groups or individuals, not including those to which you are at war.
You should have the right to be rude. Example: You’re a scumbag chink, or You’re filthy white trash, or We should deport all Peruvians.
But NOT have the right to say things like: We should KILL all whites or blacks or Christians or Muslims.
(While being considerate of community standards on billboards and public displays.)
Drew Wakariuk commented 2017-11-03 17:17:47 -0400
Censorship is hate against all people. I wonder how many of these people would react if you said kneeling for the anthem is an expression of hate?
Drew Wakariuk commented 2017-11-03 17:16:23 -0400
Iain got that right, as if they are the ones who get to define such things that are merely a matter of opinion and perspective. Legitimate criticism is not hate speech. And the numbers being higher among racial lines shows who the actual racists are. If you try and label some non white persons vitriol against white people as hate, they would get all upset and defensive, such hypocrisy.
Iain Foulds commented 2017-11-03 16:27:49 -0400
… Inevitable. “Hate” speech are simply ideas and values that they disagree with.
… Telling themselves the demented lie that expressing ideas that they disagree with is violence, allows them unlimited license for violence against others.