December 21 UPDATE: A new hateful tweet by the CBC's Lyndon Penner has surfaced:

You run across a lot of lefty crazies on Twitter who wish conservatives harm, or call Stephen Harper "Adolf Hitler" -- but you certainly don’t expect something this insane from a CBC columnist: 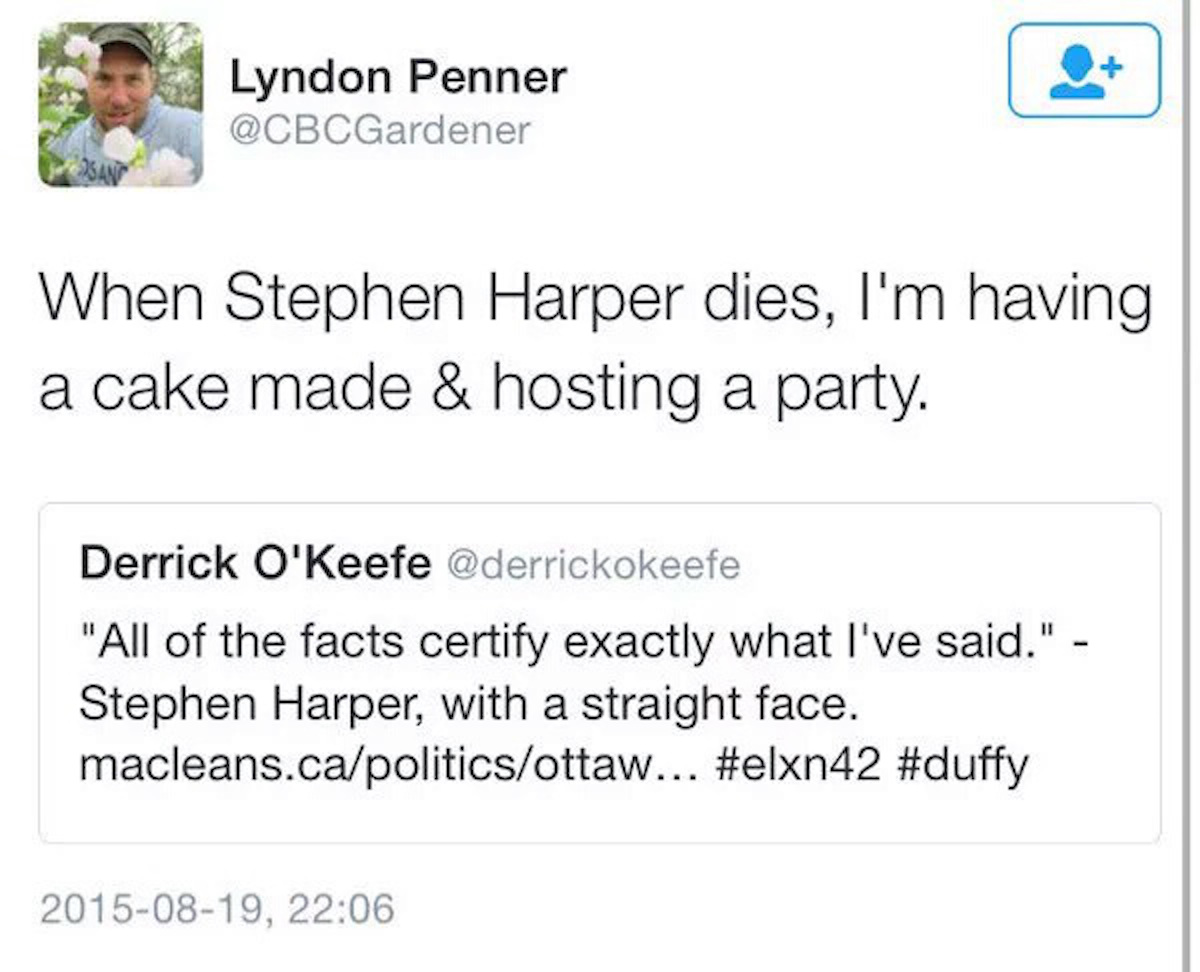 Lyndon Penner is a gardening columnist for CBC News Saskatchewan and that he still has his job after sending out this tweet is stunning.

I will be filing a complaint with the CBC Ombudsman and will update with the response.

GET YOUR “Sell The CBC” t-shirt ONLY at The Rebel Store!

The CBC: Irrelevant, arrogant, biased. It’s time to pull the plug!
SIGN THE PETITION to SellTheCBC.ca

Thank you – I have a sense of humor and can even laugh at “sick” humor.

Danniel Oosterman commented 2015-12-22 14:30:43 -0500
No surprise here, most lefties use words like “evil,” “nazi,” “fascist,” with a mantra of “@#$% Harper!;” rinse and repeat it often enough it becomes the “truth.” Most corporations have a fairly strict code of conduct both in the workplace and even with respect to public conduct declarations (e.g. remember the “FHIRTP” goofball who was fired from Hydro One). I support this gents right to free speech but I certainly don’t support his employment with a publically funded broadcaster. If Mark Steyn says the same thing about Trudeau he’d probably have the freedom-robbing CHRC to deal with. Great commentary Bill Elder.
John Baglow commented 2015-12-22 13:41:12 -0500
Gosh. The “free speech” notion touted by devotees of the now defunct Free Dominion and other venues appears to be on hold for the moment.
Muta Ween commented 2015-12-22 13:37:59 -0500
The majority of CBC employees would probably not express a wish for physical harm to come to the former Prime Minister. However they certainly participated in creating the sentiment of loathing and promoted the angst throughout Harper’s tenure. Make no mistake. The CBC wished Harper "politically " dead and rejoiced on air when Harper was politically laid to rest on election night. Of course this was not limited to CBC. CTV reporter Craig Oliver certainly expressed his glee , the culmination of putting knives in the back of Harper at every opportunity for at least a decade.
We have to face the fact that there is no independent media in Canada. Decades of infiltrating colleges and universities and obvious bias in hiring and management at CBC have created a media that is totally integrated with the leftist socialist parties. Private corporations can do as they wish. But the CBC is at least partially owned by conservative taxpayers and we deserve better representation of our viewpoints sans the blatant bias as exhibited by the so called anchors and reporters at the network.
Lance Humphries commented 2015-12-22 12:33:21 -0500
Nailed it Bill!!
Deborah Graupner commented 2015-12-22 10:44:49 -0500
Bill Elder – you nailed it Bill!
Bill Elder commented 2015-12-22 10:14:47 -0500
As we see in this example and with partisan trolls on this board , putting on the “progressive-liberal” ideological camouflage allows its wearer to spew insanity and hate without bearing the responsibility of doing so because they really believe their hatred is sanctified and their mental instability is political righteousness.

In essence, the new lib-left-progressia has become an ideology which both preaches hate/intolerance and offers insanity as reason. I’m a life-long classic liberal and I have watched the liberal-left political compendium became alienated from true liberalism decades ago. It is now simply an unreasoning, intolerant, hateful zombie-like movement steeped in sociopathic dogmas with a leadership which drives for a single party state under anti-democratic enforcement of arbitrary politically correct code – much like its ideological predecessors in Germany and Russia.

Today’s “liberal-progressive” does not dialogue, they condemn – they do not make logical counter point to criticism, they attack and damage opposition – it no longer has political adversaries, it has mortal enemies – Progressia no longer acknowledges its ideological fallacies, it doubles down on them and openly engages in hypocrisy – lastly, they no longer engage in a plurality of perspective or diversity of opinion, they march lockstep behind a single ideal and that ideal is both fallible and malevolent to individual freedom and dignity.

People like Penner are not the ubermenchen of this new neurotic totalitarianism masquerading as “liberalism” just another mind-controlled zombie who was convinced this is the best idealism there is because it allows you to selectively hate and it rewards insane reasoning.

Father Lawrence Winslow commented 2015-12-22 08:43:35 -0500
And this low-life works for a company that is funded by the Canadian Taxpayer and to which our Prime Miscreant is vowing to increase that evil, immoral funding from the public pocket! I guess that makes this company and that Prime Miscreant similarly DESPICABLE AND DISGUSTING!
Steve McQueen commented 2015-12-22 08:41:53 -0500
MICHAEL MANN commented 7 hours ago – hope you and your family die today.

So die MICHAEL MANN you nasty filthy disgusting pig. So funny.
Jason Tse commented 2015-12-22 07:15:35 -0500
Some people just can’t be left unsupervised and they seem to end up at the CBC.
Keith Harvey commented 2015-12-22 04:20:30 -0500
Uh Oh! It looks like somebody forgot to take their medication. Or maybe Lyndon is growing something in his garden the authorities should know about. When you say nasty things like that about what was the best PM I have ever seen in office, there is something really wrong. This was a PM that was trying to do his utmost best to protect this country and warn us of any incoming dangers that are being ignored by the left wing zealots we now have in office. If nothing else keep in mind a final measure of protection by Harper. Our fighter planes were scheduled to have their continued service reviewed in March 2016, that was a Harper deal. Our military along with Kurdish fighters were involved in a serious firefight with ISIS Terrorist Scum, they were able to get air support which no doubt saved many lives. Leaving it to delicate Trudy, as he is eager to pull out of our coalition commitment, with no planes there our guys would have suffered severe loss. Thanks to Stephen Harper that didn’t happen and the day was saved. Say what you like about Harper, but you have already seen differences with Trudy at the helm and he’s probably more of a puppet king anyway as he has Gerald Butts hand up his ass moving his mouth, so I’m not totally convinced it’s all just Trudy that’s making the decisions. Anyway it looks like the invasion is in full swing as we welcome the first wave. Get ready for the games to begin.
But I do know others have gotten fired from their jobs for the kind of language voiced by Lyndon. Coming from the CBC you can expect this kind of thing as they are not a news source but a propaganda machine working for the Liberal Dictatorship.

As you say, many people compared Stephen Harper to Hitler. Certainly Harper renewed anti-semitism in Canada.
I suppose that many people will be relieved when Harper dies. His time in office was terrible for Canada in so many ways. It is funny that a gardening expert is the one to find words for this, rather than a political columnist.
Rae Fraser commented 2015-12-21 13:07:15 -0500
OK. Call me dumb—but I don’t understand how Harper renewed anti-Semitism in Canada . Nobody has called Jay Kelly on this—- ???
Donald Craig commented 2015-12-21 12:39:53 -0500
everyone commenting needs to complain to the ombudsman, who according to cbc has the most integrity of all canadians, of course her integrity includes defending/ignoring rampant anti semitism at the cbc..