CBC’s social media reporter Laureen O’Neil goes out of her way to mock PM Stephen Harper over his tweet about refusing to implement a Netflix tax:

There are certainly some on Twitter who support the Conservative Party’s efforts in keeping any sort of Netflix tax at bay, but the majority of tweets about this subject appear to be sarcastic, or simply incredulous. 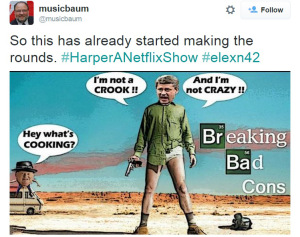 Nice huh? Yet not once does O’Neil mention that it was in fact her employer, the CBC who proposed and is pushing this tax:

The CBC wants the CRTC, Canada’s telecom regulator, to require Netflix to subsidize the production of local programming.

By omitting CBC’s role in this, O’Neil broke the CBC’s own standards and practices on internal conflicts of interests:

When the CBC becomes the story, our reporting remains accurate, impartial and fair.

I have been told of at least one complaint filed to the CBC Ombudsman over this and if O’Neil continues to ignore my repeated efforts to get her to include this pertinent information and admit she failed to properly disclose, I will also file a complaint.

Update: O’Neil is not the only CBC journalist to have been caught excluding this: 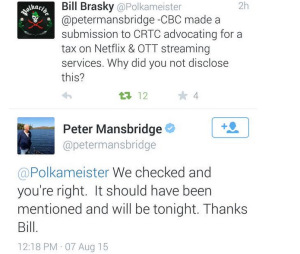 It’s not remotely plausible that multiple journalists and an entire TV crew did not know the CBC was pushing for this tax.

Ezra should be thanking me. I am the one helping him get advertising and traffic. He wants the heated debates

Bill Elder commented 2015-08-11 07:11:34 -0400
Why am I not surprised CBC (Pravada Kanada) supports government intervention in free demand markets and supports a broadcast monopoly – market protectionism, that they would have a corporate culture that hates laissez-faire capitalism – particularly when their stuffy, preachy propagandist product is uncompetitive in the consumer markets but refuses to change.

And why am I not surprised CBC corporate culture is juvenile, tantrum prone and displays conduct of the eternal spoiled child
Peter Netterville commented 2015-08-11 00:12:17 -0400
Dee B., most of what you said is simply not true.
Lance Humphries commented 2015-08-10 23:23:52 -0400
Well Deb, if you read the comments of others, you’d see it runs a little deeper than simply “pacifying the voters”, though why am I not surprised. You see, the Left, tends to assume everyone else is as superficial as they are. Of course they do, crazy ppl don’t know they’re crazy! So you don’t like the trade agreements huh? Try looking around you. Countries that don’t trade, like N Korea, Cuba are doing so amazing eh Deb? And China was doing great til it opened up to trade – right? Oh wait, no they weren’t, now they’re flourishing! Get it Deb? The Wealth of Nations was written 250yrs ago Deb, where you been? Provincial taxes are sky high? What’s that go to do with the Feds? Maybe if you Lefty’s didn’t scare off 300k jobs and the taxes the employers and staff paid the rest of us wouldn’t have to cover for them!! Harper can’t distract ppl like you Deb, you’re too stupid to understand the issues in the first place, or how societies operate. I do appreciate you exposing yourself however!

Hey Jimmy – did write a “thank-you” to Ezra for not deleting your comments, like the Star and the Globe do to conservatives? Have you criticized other media for discussing it? Say – you don’t have a double standard do you?
When are you going to “self-depopulate” and save the planet???? Sea levels are rising fast – better hurry!!!
Liz Rosie commented 2015-08-10 23:10:24 -0400
CHRISTIAN FLETCHER said it all.
“Yay! Let’s tax a competitive service everyone wants so we can subsidize a non-competitive service (CBC) that only a few people want. "
Heck, if there were no cbc, where would the Debs go to whine? (kinda hoping this is a one off)
Go Netflicks.
fend for yourself, cbc, like everybody else does.
How about the PBS model, have a crowdfund , pay your own way.
Jimmy Da Silva commented 2015-08-10 22:46:15 -0400
Another non-story at The Rebel.
Dee B. commented 2015-08-10 20:45:38 -0400
Oh please…this is NOT some kind of conspiracy on the part of CBC….Does ANYBODY really think that whether or not NETFLIX gets taxed is even a REMOTELY relevant issue? We have huge unemployment rates across the board, our country is busy participating in yet another Trade agreement that will sell out our country, as yet ANOTHER Tory Prime Minister has already done with NAFTA, taxes are sky high in the majority of provinces, our environment is a mess…And our current PM thinks that this is what? Going to pacify the masses and continue keeping them compliant and asleep so that he can sell us out to the highest bidder as his predecessors have done? No, just another sleight of hand designed to distract and conquer those too ignorant of what the REAL issues are…..
Donald Craig commented 2015-08-10 13:35:58 -0400
cbc employs sub journalists.. in order to raise their standards.. across the board… they know that libs and ndp will raise the funding and the cons are going to cut it back..and if given a majority may even sell it off… of course all those talented personalities will be immediately hired… much as solomon was rehired by the cbc
John Zealand commented 2015-08-10 12:26:28 -0400
CBC commie reporters are so stupid and full of shit. Time to stop the gravy train at CBC and take our money back from second class reporters.
Vlad Johnson commented 2015-08-10 10:41:12 -0400
No problem with Netflix tax.

Right after CBC’s funding goes from $1B DOWN TO FKG ZERO!!! Sh*tbag communist network that no one watches.
gerry fladager commented 2015-08-10 10:20:51 -0400
WHOS name from the loons (cbc-ctv-global) will be no the voters list in the election this fall???
Philip Brown commented 2015-08-10 09:42:02 -0400
The CBC has mounted a political campaign against the governing party, in violation of the Canada Elections Act. All these lawn signs stating “I vote CBC” are a complete violation in their production and deployment.
Christian Fletcher commented 2015-08-10 08:18:16 -0400
Yay! Let’s tax a competitive service everyone wants so we can subsidize a non-competitive service (CBC) that only a few people want.
David Murrell commented 2015-08-09 17:52:48 -0400
A few days ago, the CTV News national show aired a biased report by Richard Madan railing against Harper opposing the Netflix tax. Again, the establishment media protects their own vested,financial interets.
Dave Bainard commented 2015-08-09 13:13:42 -0400
CBC/liberals would support a tax on anything. We could at least ax the CBC.