CNN host Don Lemon said on Monday night that "thoughts and prayers" were not enough in the wake of the recent shooting in a Texas church.

These God-fearing Christians were in church. They were already praying. Thoughts and prayers did not stop an oversight from the justice system which enabled a guy who attacked his stepson and assaulted his wife from getting a gun.

Thoughts and prayers didn’t stop a troubled person from buying assault grade weapons that took the lives of 26 people in an instant. And please don’t get me wrong. This is not at all about the Second Amendment or taking guns out of the hands of responsible gun owners.

So tonight, I hope you will join me in praying that our leaders will actually do something of substance and action this time that precludes another thoughts and prayers moment.

Remember this. Faith without works is dead.

The tragic shooting in Sutherland Springs, Texas left 26 people dead and more wounded. Eight of those killed were members of the same family. Yet our nation's prayers for the loss of innocent life met with anger and annoyance from the left.

Lemon is hardly the only public figure treating thoughts and prayers with apparent indignation. 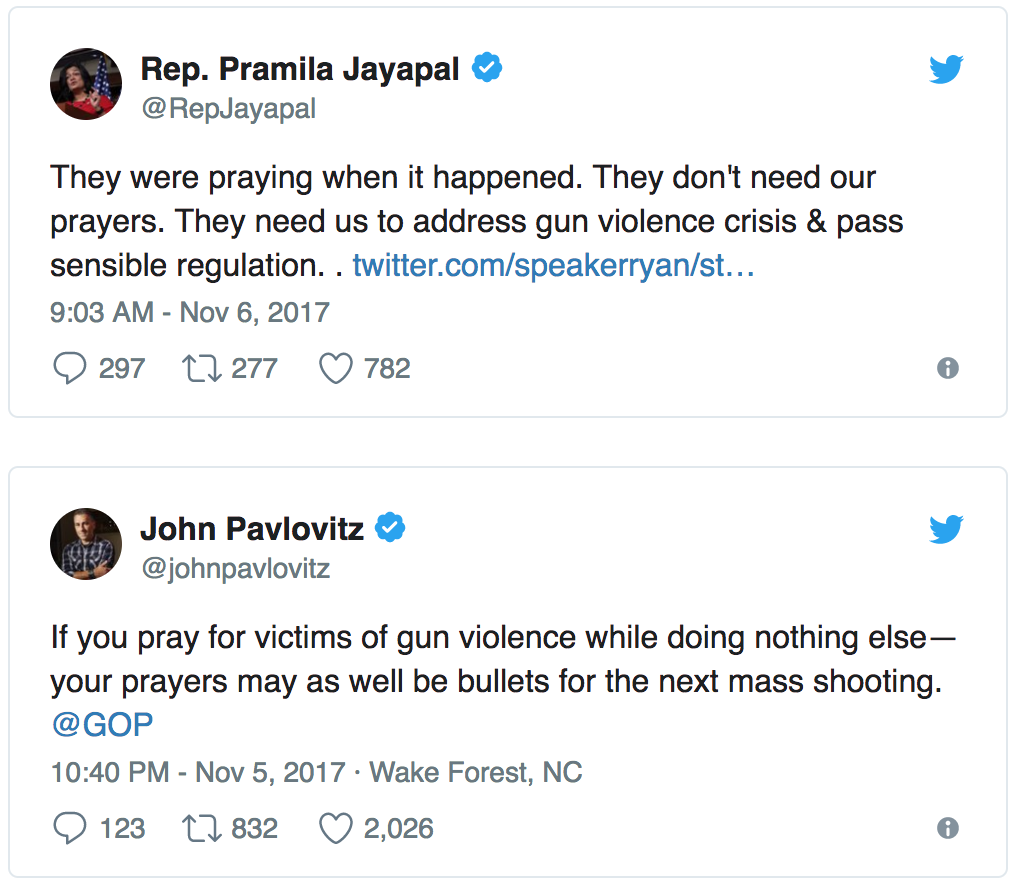 It is perfectly fine to have strong views on gun control. But why direct anger at Americans who are praying for victims?  Prayer gives people hope and makes people feel unified after a tragic event.

Many times, shootings like the one in Texas brings out the best in humanity. We see people risk their lives to save their neighbors, and communities come together in the aftermath. But other times, unfortunately, tragic events bring out the worst in politics. And in this case, the nasty, sneering left is using the death of 26 people to push a political agenda and vilify those who pray.

You must be logged in to comment. Click here to log in.
Allan Peterson commented 2017-11-09 12:27:36 -0500
http://www.federalobserver.com/wp-content/uploads/2012/08/Gun-control2.jpeg
Andrew Mirlach commented 2017-11-09 10:52:55 -0500
“No one is saying that strict gun laws and draconian punishments for gun violence will eradicate gun violence/mass shootings, but if there can be a reduction of gun violence/mass shootings on any level, then that is a success as opposed to doing fuck all and have gun violence and mass shootings be business as usual.” https://crimeresearch.org/2013/12/murder-and-homicide-rates-before-and-after-gun-bans/ The simple fact is that the vast majority of gun crimes are by commited by Democrats against other Democrats. So the only logical solution is to ban Democrats.

https://stevengoddard.wordpress.com/2015/12/06/a-simple-solution-to-gun-violence/ Some facts about guns and gun laws. The left is, as always wrong on this topic.

Since you have a reading comprehension problem – I will repeat myself.

It does not make sense because you just said it would not really work. It has never worked and it will never work. Bataclan, Nice, New York, London, Berlin.

All you are going to do is disarm law abiding people. Criminals will not obey new laws any more than old ones. As the Governor of North Dakota said when the introduced their Constitutional Carry law, “Criminals have always had concealed carry. Why should we restrict law abiding people?” My reading comprehension is fine. Your logic and history comprehension are woefully lacking.
Dan Mancuso commented 2017-11-08 12:15:07 -0500
GLENN CRAIG commented 17 hours ago
https://www.youtube.com/watch?v=B4HEchh0XD8
I can’t think of a video I have ever seen on YOUTUBE that I actually like more….

Just another unsung American hero and patriot, salt of the Earth, God fearing family man – with an AR15!
That was a well spent 37 minutes.
The best part is where he acknowledges how blessed he is.
Andy Neimers commented 2017-11-08 04:41:59 -0500
And Don Lemon… Should a day come when some deranged nut opens fire anywhere near you, you will piss your CNN silk panties praying that “somebody” has a weapon to fire back and give your ass cover…
Frank Hohimer commented 2017-11-08 03:18:32 -0500
Al Peterson,

Since you have a reading comprehension problem – I will repeat myself.

Doing something is better than doing nothing. If there can be any reduction at all – that’s better than nothing. No one is claiming that any such new laws will eradicate gun violence.

Or how about in Nice or Berlin? One muzzle in a truck and the score is the same.

Since you like pithy little rejoinders how about this one:
“Doing the same thing over and over and expecting different results is called insanity”.

And I particularly like this one from C.S. Lewis. It fits the lefty mentality so well:

“In a sort of ghastly simplicity we remove the organ and demand the function. We make men without chests and expect of them virtue and enterprise. We laugh at honour and are shocked to find traitors in our midst. We castrate and bid the geldings be fruitful.”
― C.S. Lewis, The Abolition of Man
Glenn Craig commented 2017-11-07 19:36:13 -0500
https://www.youtube.com/watch?v=B4HEchh0XD8

I can’t think of a video I have ever seen on YOUTUBE that I actually like more. Just as there is lag time on 911 calls…there is lag time on prayers being answered….in spite of the militant atheists…even the militant tactical atheists….even the militant “my god is greater than your god” deluded that their’s is the only mom’s home cooking version and all others are their legitamit targets…this man is living proof that the prayers of the righteous do not go unheard and unanswered.
Charles White commented 2017-11-07 19:26:48 -0500
What is that shit I smell, am I near a barn yard? Nope, it is the gaseous announcers of the CNN building…or CBC…or CTV…or Global…or Any other Mediocre Strep Media.
Liza Faucher commented 2017-11-07 19:26:44 -0500
You want to do something, close the damn southern border, make sure all areas of the regulatory process communicate with each other when doing back ground checks. If you can’t get rid of everyone else’s gun, I am keeping mine. People like Lemon, Frank and the rest of them want people to be vulnerable instead of protected.
Dan Mancuso commented 2017-11-07 18:31:47 -0500
Lemon; A small fruit, yellow and sour, very acidic.
Seems an apt description of that sour, yellow fruit at the Clinton News Network!
Jan G commented 2017-11-07 18:09:18 -0500
Don Lemon is going to pray for these people?
This is the most disrespectful coverage of this tragedy.
Frank Hohimer commented 2017-11-07 17:25:20 -0500
Al Peterson,

Doing something is better than doing nothing. If there can be any reduction at all – that’s better than nothing. No one is claiming that any such new laws will eradicate gun violence.

I love the notion from people like you that think doing nothing is doing better than something. Reminds me of that Simpsons episode with Ned’s beatnik parents – “we’ve tried nothing, man and we are all out of ideas”.

Exactly.
Allan Peterson commented 2017-11-07 17:08:02 -0500
So the laws we have were ignored but if pile on a few more that will solve the problem? What is it with lefties and their love of paper work?
Scripture says it best, “The heart is deceitful above all things and desperately wicked. Who can understand it?”

Yes, I do feel better. It needed to be said. People need to stop living in world of fairy tales and accept reality.
Tammie Putinski-Zandbelt commented 2017-11-07 16:11:57 -0500
Don Lemon, the pathetic posters on Twitter, and those like him are waste of skin!
mike krchnak commented 2017-11-07 15:33:09 -0500
Well there Frank. Jimmy, Sarah, do you feel all more better now you parasitic prick. All this from a leftist regressive fucktard coward that continually hides behind fake names. Hypocrisy at its finest. I suggest going outside to play hide and go fuck yourself.
Frank Hohimer commented 2017-11-07 13:27:24 -0500
I know the faith over facts crowd don’t want to hear this, but prayer obviously does fuck all. If there is one place that these people should have been saved by a miracle – it’s God’s house.

Now prayer may be helpful to people after the fact – to comfort them after this tragedy, but when are people going to wake up and realize that praying to God achieves the exact same result as praying to Santa Claus, because there is no difference here.