Once and for all, let's crush the cornerstones of modern Third Wave feminism, shall we? Repeating a lie does not make it true, even if I wish it was so, or think it should be true.

As Rebel Media reporter & alleged actual woman Lauren Southern notes, there is no anti-woman rape culture in the Western world.

Unless you mean criminals, or certain refugees/ immigrants of a generally Muslim & male persuasion, who can be very rapey for various nasty reasons.

Otherwise, the actual non-feminist textbook statistics-- on-campus and off campus-- don't show anything like the "1 in 4" mantra. Oops.

"From the Bureau of Justice Statistics, a division within Department of Justice: Rather than one in five female college students becoming victims of sexual assault, the actual rate is 6.1 per 1,000 students, or 0.61 percent (instead of 1-in-5, the real number is 0.03-in-5). For non-students, the rate of sexual assault is 7.6 per 1,000 people."

Feminist Barbie says "Math is hard!" That's in any given year, statistically. Where did 1 in 4 come from? Don't know, don't care, it's wrong. 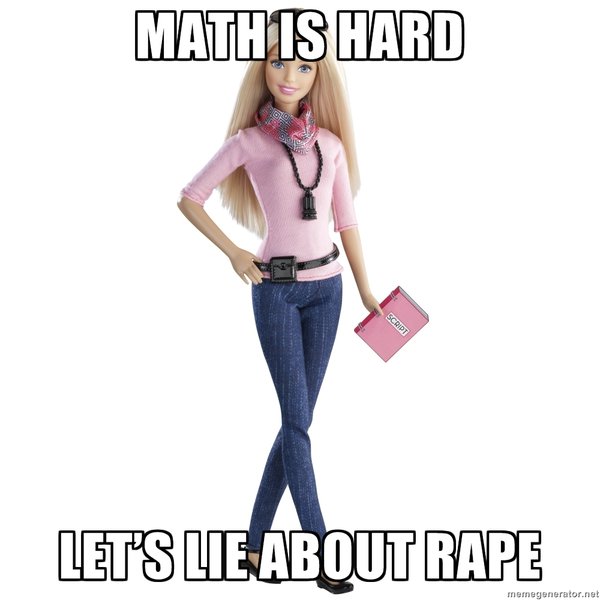 Life is complicated. The false rape-claims made by a minority of women just hurt everybody. Hook-up culture is a nasty place for everybody. Drunk-sex is about drinking; regret sex is about mistakes; post-hook up abortion may involve both, but we cannot have both the older special snowflake status for women, alongside "I'm a Slut And Proud, and want no consequences for how I live and conduct myself" and not expect complicated reality to intrude.

Once you actually look at men and women in the modern workplace, there is no actual gender pay gap.

More men are willing to sacrifice everything to slave away for decades at work; most women are (or have been) saner than that.

Older patterns of higher pay for men were a Victorian invention, to prevent everybody out of diapers in a family from having to slave 14 hours a day in the nearest dark satanic mill: "Here's an idea: one man, one wage enough for a healthy family!" Yay!

Both Binklings currently work at local fast food joints alongside other teen men, and teen wimmins. All are paid exactly the same minimum wage, equally being eaten away by inflation and taxation, with no benefits. Same with the male and female managers.

Gender Pay Gap? Not really, in 2016, possibly unless you live in a Third World Country making things for WalMart and First World shoppers. Don't know -- but Western feminists don't care about them.

What we do know: many women choose different careers than men, who seek higher paying professions with higher requirements & skills; women tend not to overwork, they want family-time, weekends, flex-time, and maternity-leave; women mostly don't choose dangerous & labour-intensive work; women are less likely to negotiate for higher pay, promotions, or new jobs-- and men are better at the negotiation game.

The alternative? Looks like feminists want women not to be allowed to choose their work; or else, they should get paid exactly the same as men, for work of different or lesser value, i.e., the government taking money from men to give to woman because 70%.

Yet it gets worse than misinterpretation and bad stats. Much worse. Facts & truth never stopped a good propagandist, right?

Witness feminist comedienne Sarah Silverman, who fabricated & then lied loud and long about her alleged feminist pay-gap experience [Sarah Silverman: Women get paid less and it's 'sh***y', CNN, April 9, 2015 ]. The guy who allegedly underpaid her for the same job as a man brings the facts in this video. Buuuuurn.

Don't let reality trip up a good narrative -- it should have been true, right? Make stuff up for the cause! Ignore those crumbling narratives and tissue-paper cornerstones of our feminist grievance culture!

One might think that the countless fact-checks and actual studies and bringing the fembot talking heads up short by disproving their lies and generalizations and misunderstandings might clear things up -- but this is a PR and social radical movement, which garners a lot of money, attention, media-attention, books, Sarkeesian-style Patreon loot, publicity, publishing, academic positions and courses, and victimhood goodies. Facts don't enter into it.

Oddly enough, the corrective facts I've presented above are widely available on the internet, but not in academia, politics, or the media. Perhaps this is why the freedom and fact-checking of the internet is so irritating to would-be fascists and totalitarians selling a false narrative?

(Next Time with Teh Binks: But, but, #GamerGate!, and Those Male-Mostly STEM Jobs, plus THE PATRIARCHAL!, and finally, The Violent War On Women!)

The Alberta NDP is forcing schools to let boys into girls’ change rooms!
This new rule will lead to sexual assaults and rape.
SIGN THE PETITION against these insane rules at ProtectOurGirls.ca

Though it’s a legitimate argument for debate, his belief is stronger than mine that women are wasting their window of baby making, and somehow it’s important that most women have children or else some population-based issue will ensue, or that baby-making ability is some kind of gift that you have to follow through with, or else you’re not fulfilling your life’s potential.

At the end of the day, people do what they do; an equilibrium will tend to work itself out. Society’s not on a path of destruction; all things cycle along the spectrum.

Brent McFadden commented 2016-01-21 09:37:24 -0500
Divide and conquer! What the frig is a feminist anyway? Seems just another bunch useless tax funded leeches grouped along with greenie,s and other race baiters, absolutely irelavent to betterment of world. Phyco’s all!
Daniel Devries commented 2016-01-20 21:46:48 -0500
Feminists scream about how women are objectified by men, then hold topless parades and Slutwalks. If that isn’t objectifying, I don’the know what is
Sam Young commented 2016-01-20 04:09:23 -0500
Feminists have a nasty way of defining rape. A rape is whenever a woman regrets a man having stuck a body part into any hole in a woman. So by definition, giving a woman a wet willy is considered rape. Doin’t get me into the regret, alcohol, or social pressure drivel.
Drew Wakariuk commented 2016-01-20 02:29:49 -0500
I can hardly wait until the slut walk in Toronto runs into a sharia patrol, should make for some damn fine video.