1. The Islamic State releases another of its snuff-videos using CHILDREN to execute people it accuses of spying, and sends threats to "dog" Putin.

Here is a brief excerpt from the Daily Mail description, and a couple of screen captures of the video.

But for those with a strong stomach, here is a link to the actual video while it remains up. WARNING: GRAPHIC CONTENT of EXECUTIONS.

Prisoners can be seen kneeling on the ground in an unknown location in northern Iraq, while so-called 'cubs of the caliphate', dressed in military outfits, stand behind them wielding hand guns.

In one scene a child rants to the camera about Putin's intervention in Syria before he and a second youngster shoot their captives - who were accused of being spies - in the back of the head. 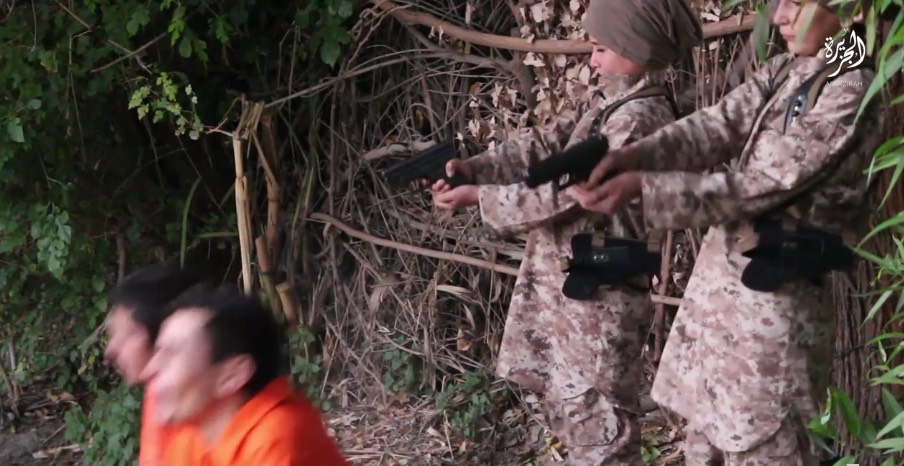 2. Britain Quietly Deploys Warship off the Coast of Yemen

Britain has secretly deployed its most advanced warship off the coast of Yemen to guard a crucial shipping lane from Iranian-backed missile attacks threat, according to The Times.

The warship has been sent to protect the Bab al-Mandeb route following attacks on three U.S. warships and a United Arab Emirates vessel there.

The vast majority of Britain’s oil and gas supplies take this route as their main passage which leads to the Suez Canal; any obstacle would mean the electricity could be cut off across Britain, said Peter Roberts, a senior research fellow at the Royal United Services Institute, who stressed the importance of keeping the strait open.

Eight years of Obama's soft diplomacy has certainly made the world a safer, more secure place.

Father Naddaf is a Christian priest who gets 24/7 protection from the IDF in Nazareth because of his vocal pro-Israel statements, and his anti-Islamic views.

He also encourages Israeli Arabs to join the IDF, which also causes Muslim jihadis to target him.

Inflatable fine. But is it flame retardant?

Someone needs to ask these questions. And a lot more.

For the most part you’re absolutely correct… They are all slopping away at the same trough to get as much as they can before the ass falls out of everything. I do maintain a hope that someone will rise and answer the call of liberty.
That person will rise when they know that the people behind him or her will not fall to pieces and run at the first sign of trouble.
Allan Peterson commented 2016-11-11 02:02:17 -0500
Matthew 18:6
But whoever causes one of these little ones who believe in Me to stumble, it would be better for him to have a heavy millstone hung around his neck, and to be drowned in the depth of the sea.
Allan Peterson commented 2016-11-11 02:00:27 -0500
Interesting that lefties of all stripes drag their children to their causes and have them spout their verbal diarrhea. I remember Ezra talking to a protester a few years ago who had her kid yapping lefty platitudes and thinking this was in some way profound.
Drew Wakariuk commented 2016-11-11 00:12:00 -0500
Funny the government of Syria is fine with Putins help, you clowns are the ones intervening.
Drew Wakariuk commented 2016-11-11 00:10:27 -0500
Sorry but i will criticize whomever i please, and will never bow to sharia or marxism.
Good to see Tommy alive and well, better to be persecuted than to be a pathetic cuck living on your knees.
Christine Marois commented 2016-11-10 22:19:12 -0500
We dont care because we are not muslims. The muslim stuff is for muslims to follow. We are christians, at least a bunch of us, and we have our freedom of religion. So mohamed or a table is the same for me. No difference.
Karan Singh commented 2016-11-10 22:02:32 -0500
Regarding #5.
I still don’t understand why there was no protest by our cons MP??
Given that NDP in cahoots with liberals on such issues and MSM in the pockets of mohammedans they won’t say anything against or report it, what baffles me most is the silence & complete secrecy displayed by Conservatives.
CPC is proving themselves as bad & vote whores as liberals. We Canadians, when it comes to choosing political parties, don’t really have any choice left.
Kelvin Grabowsky commented 2016-11-10 19:27:17 -0500
So if I call an Islamist a dirty goat fornicater, that also beats their wives and rapes innocent girls a would be crime, and goons in uniforms will arrest me? Well I’m in!! I just printed it. Bring it on goons, I’m always in the mood for a knock down drag out slobber knocker. Calling all you sharia pimps out. LMAO 😂
harvey podgurny commented 2016-11-10 19:26:33 -0500
just god cursed muslims thats all
Sherri April commented 2016-11-10 18:38:25 -0500
Trudeau for Treason
Lloyd Nolan commented 2016-11-10 18:37:41 -0500
So we’re just one step away from being criminally charged for expressing fear of Islam , that is lam e