Denzel Washington is getting some backlash from the left this week after he blamed black-on-black crime on the lack of a strong family unit, rather than on the prison system in the U.S.

In “Roman J. Israel, Esq.” Denzel Washington plays an idealistic defense attorney whose beliefs are tested when he joins a new law firm.

The Oscar winner says making the film did not make him more cynical about the justice system and, when asked about the prison-industrial complex, the “Malcolm X” star offered a surprising take.

When prodded to expand on his answer, the 62-year-old Mount Vernon native replied: “It starts with how you raise your children. If a young man doesn’t have a father figure, he’ll go find a father figure.

“So you know I can’t blame the system,” he continued. “It’s unfortunate that we make such easy work for them.”

Left-wing Twitter users immediately attacked Washington for his comments and portrayed him as a traitor to the black community: 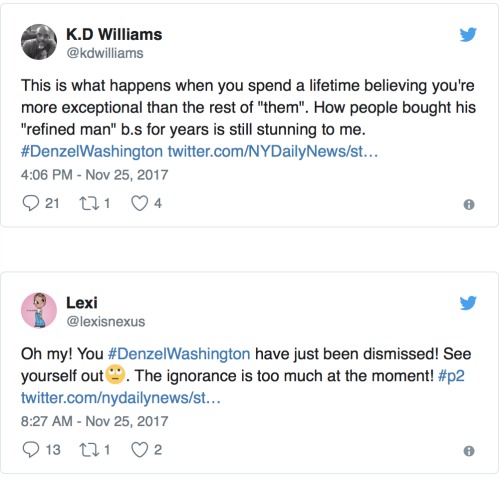 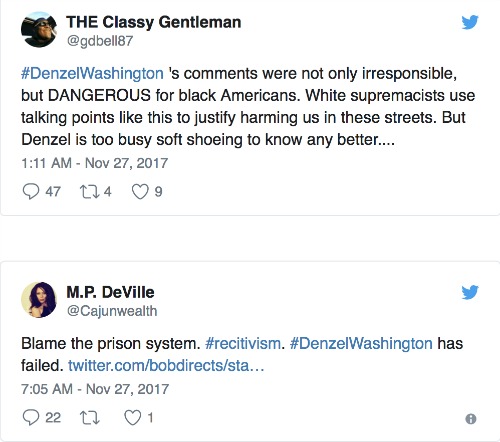 Unfortunately, this victimization mentality of the black community is a direct result of the eight years Barack Obama spent dividing Americans along racial lines. Instead of empowering members of the black community, Obama made them feel like victims of a system that is rigged against them.

What Washington is trying to say here is that the real problem for blacks in the U.S. is not the prison system, as people are already in trouble long before they get there.

Rather, the problem blacks in our society are facing right now is the break-down of the family unit. Last year's U.S. census revealed that a staggering 71.3 per cent of black children grow up in single parent households. Without a strong family unit at home, young people are increasingly turning to street gangs to find a sense of belonging.

What Washington said was not anti-black at all. Instead, it was a call of arms of sorts for members of the black community, intended to encourage them to work on building stronger families, rather than blaming the system for their problems.

You must be logged in to comment. Click here to log in.
Andy Neimers commented 2017-12-02 04:10:25 -0500
A 71 percent plus birth rate of black babies born into “unmarried” circumstances says all you have to know about the morality of too many black communities.. AND WHERE ARE THEIR “MORAL LEADERS”???
Robert Raymond commented 2017-12-01 09:17:49 -0500
The victim culture in the USA will continue unabated for another 1000 years simply because it is easier to blame the quality or lack of quality of your life on someone else than to pick yourself up by the bootstraps and create a decent lifestyle for yourself.
Yes, slavery and slave owners were evils of the past but, guess what. That is in the past.
There are a lot of very successful descendants of slaves who thrive in the US and elsewhere. Some tend to play the victim card while most of these successful people have gotten over it and do not see themselves as slaves.
Why don’t these people who claim they are victims of slavery, even though slavery no longer exists in North America, fight against the slavery that exists in the poor countries of the world.
Then, they will have earned the respect of all free peoples of the earth.
Andy Neimers commented 2017-12-01 03:26:05 -0500
What Denzel Washington has “inconveniently” tapped is the failure of far, far too many black community leaders over the past four decades to posit a message of “get over it and rise above it” as opposed to “we’re just all victims , all of the time”… A little historical perspective may help as to what these “leaders” could have done… All of the nations of Eastern Europe, from Finland in the north to Croatia in the south, were subject to foreign domination, in varying degrees, from the 1200s on… Serfdom. under various foreign empires, was the order of the day, century after century… Yet in 1918, as the Empires collapsed, these people regained their national identities and proclaimed nationhood from the Baltic Sea to the Adriatic… WHY??? Because they had SPIRITUAL LEADERS in their midst who told them to get off their knees, don’t make victimhood a religion, and claim their status as equals among all men… THAT IS OBVIOUSLY MISSING IN TOO MANY AMERICAN INNER CITY BLACK COMMUNITIES… Most of their so-called leaders are still playing the victim card…
Andy Neimers commented 2017-11-30 02:57:05 -0500
Can you imagine what a different America would look like now if Obama in his eight years had tried to heal the nation rather than, obviously and deliberately, pitted white against black?… There are books to be written in the coming years why that was a mainstay of his agenda… Hint – can you say “taquiyya”?…
Robert Raymond commented 2017-11-29 19:33:23 -0500
Damn, I was in the big manure pit today (Ottawa) when I slid on some of the BS that was there. Undoubtedly a politician had just walked by. Anyway, I ended up stubbing my toe on the curb.
Will our crime minister hurry up and send me my million dollars? I need it so I can pay my taxes.
Liza Faucher commented 2017-11-29 18:58:47 -0500
IAIN FOULDS how can you paraphrase something that sounds so out of character without so much as a hint of context. The decent thing to do would be to post the actual quote or give a link so we can check it out ourselves.
Liza Faucher commented 2017-11-29 18:55:45 -0500
Denzel is right, Ben Carson is right, there are a lot of blacks from that generation who feel that way because they remember a time when parents at least tried to do the right thing by their off spring. The nanny state helped break the family up. It worked so well with the black community and our first nations community that our governments are going to do their damndest to get us all down there as well.
Andy Neimers commented 2017-11-29 02:50:14 -0500
Denzel Washington has just stated the obvious… Unfortunately, too many so-called black community leaders, and especially in urban centres, have been “preaching” the victim ethos at every opportunity for hapless generations now…
Jan G commented 2017-11-29 00:04:00 -0500
Denzel Washington is who young men should try to emulate.
He is a devout Christian, devout husband and devout father.
I’m sorry to bring it up again, but the cause of the problem = Planned Parenthood and abortion = breakdown and ultimate elimination of ‘the family’.
Abortion clinics are every few blocks in the black and Hispanic districts throughout the US.
Read any of Alveda King’s statements on this or watch her videos.
Drew Wakariuk commented 2017-11-28 23:00:43 -0500
Robert Raymond good question, i bet every time they stub their toe a white is too blame.
I wonder how long until Denzel is called a WHITE SUPREMACIST?
Charles White commented 2017-11-28 19:08:47 -0500
By the way, if Malcolm X were around today, he would be denigrated by the violent left blacks. Bacon Lettuce Mayo, BLM, would denounce him immediately.
Charles White commented 2017-11-28 19:02:47 -0500
What is ironic is Mr. Washington was the stereotypical black leftist, but is now thrown out by the violent left as irrelevant.

Really, there is no debate between left and right anymore. It is between people who value liberty and the elitists who want to quash liberty.

This is an excellent interview with Thomas Sowell.
Thomas Sowell – Legacy of the Welfare State
https://www.youtube.com/watch?v=lm-FqtAOSB8