Far be it from me to ask if Rebel Media’s dearly beloved curmudgeon Gavin McInnes, Scottish-Canadian writer and reputed inventor of hipsterdom, really understands the video game thing.

OK, not so far be it. I’m asking. Watch his video first...it’s just over three minutes.

First, Binks is one of those mysterious super-indulgent grown-up gamers without a life whom Mr. McInnes cannot fathom. I’ve been gaming off and on most of my teen and adult life: board games, D&D years ago, computer & some console gaming since then– yes, including the original ‘Pong’ (Zz). I have a life: games are recreation.

Second, I do get #GamerGate. It is mainstream man-hating feminism trying to control all the things, because most gamer and game -designers are male, and teh mens doing man-things is always bad. Social Justice Warriors hate free people having fun, not minding the politics, and not bending the knee to the domineering ideology of political correctness.

What’s not to hate? ask the bullies. EXCEPT – the Left-wing fascists got stopped, pushed back, and given a bloody nose. #GamerGate is a little good news in the culture wars, and a defeat for totalitarian feminism.

And yet.. quoth the hipster:

“There’s a layer of patheticness here, though, that no-one is talking about: namely, I don’t care if video games are sexist or not sexist or politically correct. Video games are for little kids. Why are adults playing video games?”

There’s the question. Or, to be more precise, why are young men and adult men investing time in addictive fantasy worlds, recreated history, crusades and quests and valiant deeds, and rescuing princesses and fighting dragons, via the medium of video games? Hmm. 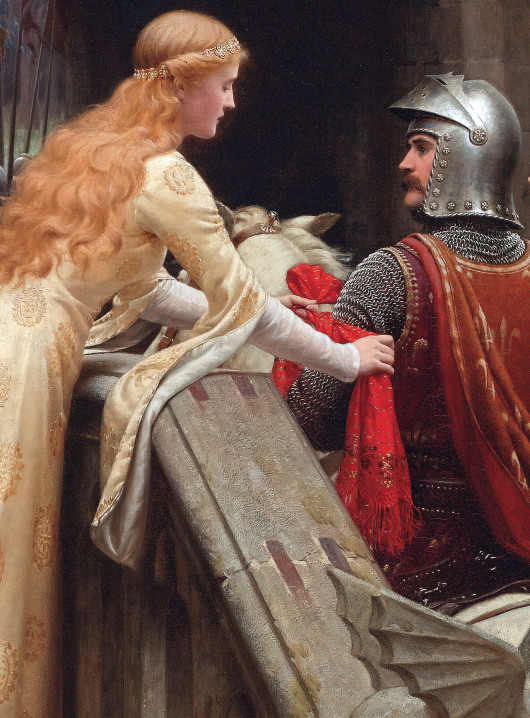 The other day I enjoyed an extended online speech by a writer & friend of Teh Binks, Sir Charles Coulombe, on the topic of chivalry. The older relation of the sexes called for pursuit & resistance; heroism, rescue, and triumph; men offering themselves in life-long marriage, and work, and child-rearing; roles were somewhat defined, and people knew something of where they were, how they stood. Men could be the knight & lord of their own home-castles.

Enter feminism – or, rather, the wrecking-ball of Marxism and statism against the family, man-woman unions, fatherhood and motherhood, children as the focus of energy and hope for the future, forms of chivalry and gentlemanliness alongside forms of ladylike behaviour and restraint. Enter also the state – intruding by tax and red tape and busybodiness into the family, the basic building block and foundation of Western life & freedom: some women have, in effect, married the state– husbands are optional.

Comes mass contraception, mass divorce, mass abortion, the ‘sexual revolution’, and the loss of all the rules, except that men are bad and yet must man up, and women are good and should act sexually like the worst sort of men until their biological clocks go ‘ding!’, and then marry & settle down and pop a few babies out. Yay us.

Except...where are the men? Even modern women have begun to wonder. They are staying away in droves from marriage, church, university, commitments, babies, and difficult careers. With the divorce laws against us, culture & media & politics captured by feminism, and with the bitter fruit of 50 years of ever more divorce unsettling us and the institution of marriage, many men are opting out. Going underground.

Perpetual teenhood is endemic, but not without decades of good reasons. Peter Pan is the eternal boy: so are we becoming, as a gender in the West, in our Never-Never Lands. After all, if you were a young guy: which would you rather?

(a) Yet another college-enforced talking-to about rape culture and how you should know that rape is very bad, and that you – as a male, are a neanderthal rapist, but should not rape anybody, even though you are an evil rapist because you are male…,

(b) The awesome new Batman game for PS4 or XBox 1, where you are The Caped Crusader, unpestered by whinging feminists, unpuzzled by high school or college women, where you kick ass, take no names, and fight for the freedom of Gotham from evil-doers?

Viva la revolucion? Underneath, most men and boys are mostly still men and boys, despite now a century of feminism and nagging and finger-wagging and re-education. Most of us still want adventure, to be brave and heroic to someone, to right the wrongs and lead and make a difference, to ask for a sammich without having our heads taken off, to sacrifice our lives for decades paying for and helping to raise children with a decent woman, all that old evil icky stuff.

Chivalry may get you dirty looks at work, in school, maybe at home, certainly in most areas of public life, but NOT in your gamer-life. Ding! 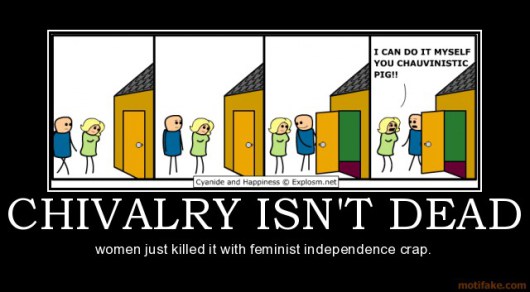 Games (and adventure movies) are part of the resistance – a man-zone of often forbidden, care-free, incorrect, and traditional thoughts, aspirations, and ideals. The horror!

Gavin is partly right: such geek-nerd-gamer culture may be partly about a kind of immaturity & playing kid’s games, time-wasting and such – but it’s much more than that, as the anti-GamerGate feminists know: trust them in this, at least. Games: engaging fantasy, freedom, princesses and babes & swords and dragons and heroes and villains and deeds of derring-do. They reflect that same streak of movies about the same themes.

Wanting to be a manly man, or a leader, or a father in today’s environment– unless you are rich or powerful– is just not on. Men and boys find themselves lost, puzzled, angry, and disillusioned by the splintered ‘Nowhere’ of modernity, by endless and contradictory calls to ‘Man Up‘ but ‘Don’t Be That Guy‘; to be sensitive new age manginas.. who nobody wants to marry; to be willing to slave and suffer as a husband & father.. only to be dumped and left without a home or children by some divorce court.

So just perhaps, dear Mr. McInnes, there’s a fire behind all this #GamerGate smoke, with the militant feminists smelling and hating the whiff of freedom and man-culture and olden ways and things they would destroy, that no man (or woman) may ever be free, or noble, or aspire for anything grander than the smelly little orthodoxies of political correctness, in the cramped and soul-killing world such social justice warriors want us all to live in.

Should men wake up, act in the real world, lead to confront good and evil in our times, and all the rest? Well, yes. But adventure movies like Lord of The Rings, and adventure gaming allow brow-beaten and puzzled boys and men to still have a sensation of doing the right thing, in an overwhelming real world gone terribly wrong.

You must be logged in to comment. Click here to log in.
Gregory Mac commented 2015-09-04 11:10:44 -0400
Gotta say that I agree with Gavin. I play only one video game from time to time. But This recluse in to manliness is a cop-out. Men don’t go off and be a man where it is safe to do so. Men act like men all the time. And if gamers acted like men in their real lives then there would be no problem winning the culture war. The issue is that most gamers are losers. And don’t have the balls to act like men when they are with people. Then they try to get people to like them. That’s not manly either. I have sympathy for the defined societal roles and the guidelines it gives to people. And gamers are the people most likely to benefit from it, but no one wins if gamers only stand up for what’s right when they are the caped crusader.