Winston Churchill said, “An appeaser is one who feeds a crocodile, hoping it will eat him last.”

The crocodile of human-induced global warming has devoured every politician who appeased it, and that is almost all of them.

As usual, the people pay the price as green agendas, carbon taxes, a multitude of unnecessary regulations, endless lost business and job opportunities amount to approximately $3 trillion to date.

In his October 2010 letter of resignation from the American Physical Society (APS) because it supported global warming without consulting the members, Emeritus Professor of Physics Harold Lewis said in part:

“The global warming scam, with the (literally) trillions of dollars driving it, that has corrupted so many scientists, and has carried APS before it like a rogue wave. It is the greatest and most successful pseudoscientific fraud I have seen in my long life as a physicist."

When are any of these so-called leaders going to look at the so-called evidence and understand the deception? Politicians go along with this socialist agenda because they agree with it, or don’t do their homework and want to appear green. Besides, it is easier to make their citizens pay the price.

The Intergovernmental Panel on Climate Change (IPCC) was created and pre-determined to “prove” that human CO2 was causing warming. This false science became the basis of the Kyoto Protocol. It was designed to punish the 23 “developed” nations by making them pay for their “damage.”

That money was to go to a fund to pay the “victims,” the “developing” nations. It was a vast socialist transfer of wealth.

Since then, the false science of the IPCC was exposed through emails leaked from the Climatic Research Unit (CRU) and two of the major “developing” nations, India and China, became major economic powers.

A majority of US senators recognized the problems when the Kyoto Protocol came before the US Senate for ratification. They knew it would cost jobs and hurt the economy. This was such a strong argument that avid proponents urged caution.

In Kyoto, a leading Democratic member of the observer delegation agreed that the treaty was not acceptable to the Senate in its current form. "What we have here is not ratifiable in the Senate in my judgment," Sen. John F. Kerry (D-Mass.) said. According to aides in Washington, Kerry wanted Clinton to sign the deal but hold off submission of it until follow-on conferences scheduled for Bonn in June and Buenos Aires in November.

The compromise, called the Byrd-Hagel Resolution, simply agreed to delay the vote on the actual treaty. It passed 95-0.

Gore tried to save the deal. He went off to Kyoto at the 11th hour to beg for some kind of fig leaf he could take back to the Senate, but was sent packing with no concession at all.

(The Chinese, I am told by permanent State Department staff who were in the room, were especially blunt, asking Gore: “We don’t understand you Americans.  Do you expect us to be poor forever?”)

Politicians claim they listen to the people, but that is increasingly untrue as current elections and referenda indicate. Polls show global warming and climate change are of minimal concern for most people. A UN poll of some 7 million people listed 14 public concerns. Climate change was last (Figure 1). 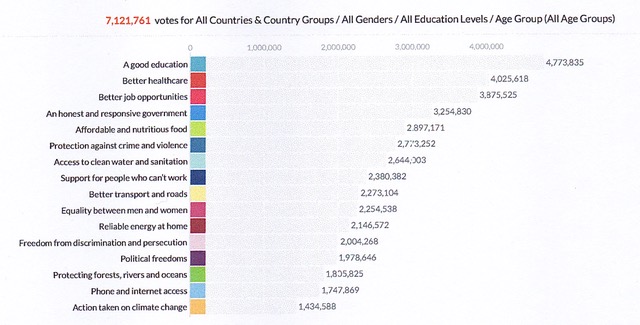 Figure 2 shows the US public priority trends measured by the Pew Center over the last four years. “Dealing with climate change” was second from bottom of the list until they added “Dealing with gun policy” this year. 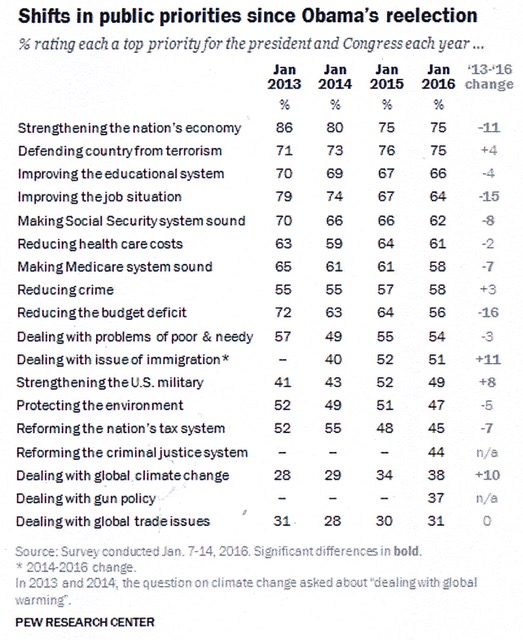 The percentage has increased slightly since 2013 due to active propaganda from Obama, including the 2015 Paris Climate Conference (COP21). There they approved the Green Climate Fund (GCF) designed to replace the Kyoto Protocol.

The final Paris agreement was a farce because it is not binding. The same conflicts and limitations that plagued Kyoto were now amplified and better understood. Typical of politicians” they all agreed to the GCF in Paris to appear green, but with very different intentions regarding actions.

Countries are supposed to contribute $100 billion annually by 2020. Friends of the Earth complained in May 2015:

“The US $4 billion represents only 42 per cent of the amount that was committed during the Fund's initial pledging conference in 2014, while at least 50 percent of the funds, or US $4.7 billion, should have been legally committed in order for the GCF to be effective.”

Good, it is a total waste of money anyway. Countries like Canada, with politicians who exploit the environment, global warming, and promote green agendas give away taxpayers money, while putting their industries, and businesses at competitive disadvantages. Harper gave $300 million, and Trudeau has given $2.65 billion so far.

Any country or region that chooses to restrict CO2 production will suffer economic decline. Ontario is a sad example. Even if Canada reduces production by half, it is completely offset by China’s actions.

In the developing world, China and India give lip service to emission reductions policies but their actions, namely building more coal plants, speak louder than rhetoric. China, for example, issued permits for 155 new coal-fired plants in the first nine months of 2015— one every two days.

It is another of those issues that show we cannot afford most politicians anymore. They all distort reality, ignore the evidence, and act as green dictators. The $3 billion Canadian contribution to the GCF is better spent helping First Nations prepare for the harsher realities of the pending global cooling.

You must be logged in to comment. Click here to log in.
Liza Faucher commented 2016-10-17 23:35:53 -0400
What’s your point Bill Butler? I expect he would still stand by the first quote, but he lost his ‘faith’ in the anthropogenic global warming argument he stood up for in the second quote.
“In a letter dated 6 October 2010, Lewis wrote to Curtis Callan, President of the American Physical Society (APS), resigning from the society. Lewis said that he had joined the APS 67 years previously, when it was “as yet uncorrupted by the money flood” which he said had “become the raison d’être of much physics research, the vital sustenance of much more, and it provides the support for untold numbers of professional jobs.” In his view, it was “the global warming scam, with the (literally) trillions of dollars driving it, that has corrupted so many scientists, and has carried APS before it like a rogue wave. It is the greatest and most successful pseudoscientific fraud I have seen in my long life as a physicist.”
https://en.wikipedia.org/wiki/Harold_Lewis

Bill Butler commented 2016-10-17 22:39:59 -0400
Before Herald Lewis’ mind became a victim of aging, he wrote a book titled “Technological Risk”. Here are 2 quotes from that book:
.
“The social impact of such a rise in sea level, if it happens, will be visited on generations later than ours, but not much later. Coastal cities would be inundated, shorelines would recede, and so on. Not the end of the world, but not a pretty sight.”
.
“”Yet, despite the complexity, the bottom line is that earth will be substantially warmed by the accumulation of man-made gases, mainly carbon dioxide, and that warming could conceivably approximate the climate at the time of the dinosaurs.”
.
https://books.google.com/books?id=noFcbT69gBEC&amp;printsec=frontcover&amp;dq=%22harold+lewis%22+%22technological+risk%22+global+warming+dinosaurs&amp;hl=en&amp;sa=X&amp;ved=0ahUKEwjyxum_oOPPAhWMYK0KHZIrBggQ6AEIMDAB#v=onepage&amp;q=dinosaurs&amp;f=false
.
Page 277


William Collins commented 2016-10-17 14:39:36 -0400
Harper had it right when he opined that this climate mania is nothing more than wealth redistribution. It has already been proven right in Ontario with Wynne promising to use every dollar from her cap-and-trade scheme to be re-invested in companies of her own choosing. Unfortunately all of these companies are now owned or run by former Liberal party bigwigs. If you think pay-for-play is only an issue in the US you should look no further than a mile north of the 49th.
Bill Elder commented 2016-10-17 14:22:24 -0400
Green shift agendas are being driven by fascist policy enforcement.
Mark Sherman commented 2016-10-17 14:10:24 -0400
This whole topic angers me. To think we are being forced to contribute to a wealth distribution scheme at our own countries expense and so many people seem to be OK with it. I’m sure as hell not giving in to this insanity!
Liza Faucher commented 2016-10-17 14:06:15 -0400
I was recently a part of a poll that was a mail out by my MP, which was almost identical to the UN poll in figure 1.
To be sure, climate change was last on my list of priorities for the government. When are governments going to stop ignoring their citizens opinions? The only opinion they are willing to take into account is the one that supports their agenda. The rest of us who hold the ‘wrong’ opinion (according to them) are as good as invisible or considered too stupid to be able to form an opinion. We have to speak out and stand up to the rebuke. If we don’t the bullies will get their way.
Maurice Potvin commented 2016-10-17 13:30:05 -0400
Great piece, Tim. Thanks.
Stephen Eisenberg commented 2016-10-17 12:39:05 -0400
As usual, well put.

Last night I caught a bit of a “talk show” where the host commented on “climate deniers” to great applause. OK. Climate deniers. So what do we call people who refuse to do the research? Chicken Littles? “The mislead”? “Climate fools”?

Name calling has been used as a means to embarrass or insult realists about climate. Its time to drop to that same level and ridicule the Gore followers as Chicken Littles. Maybe it might wake them up.

The “Dr. King” of climate change: Greta Thunberg goes to Washington
A Twitter List by The Rebel