Today, The Rebel tried to purchase advertising on Facebook, to promote the premiere of our new documentary, Save the Christians.

You may recall that we went on a crowdfunded journalistic and humanitarian mission to Iraq last year, to report on the genocide of the region's Christians at the hands of ISIS, and to deliver some humanitarian relief as well.

The full length documentary about what we saw there is now completed:

Save the Christians: The Forgotten Refugees will debut on Thursday, February 1, in Toronto (tickets available HERE).

Today when we attempted to buy ad space on Facebook to promote the film's premiere, Facebook turned us down.

Without giving us any reason.

We edited the proposed ad five times. It was still declined by Facebook. 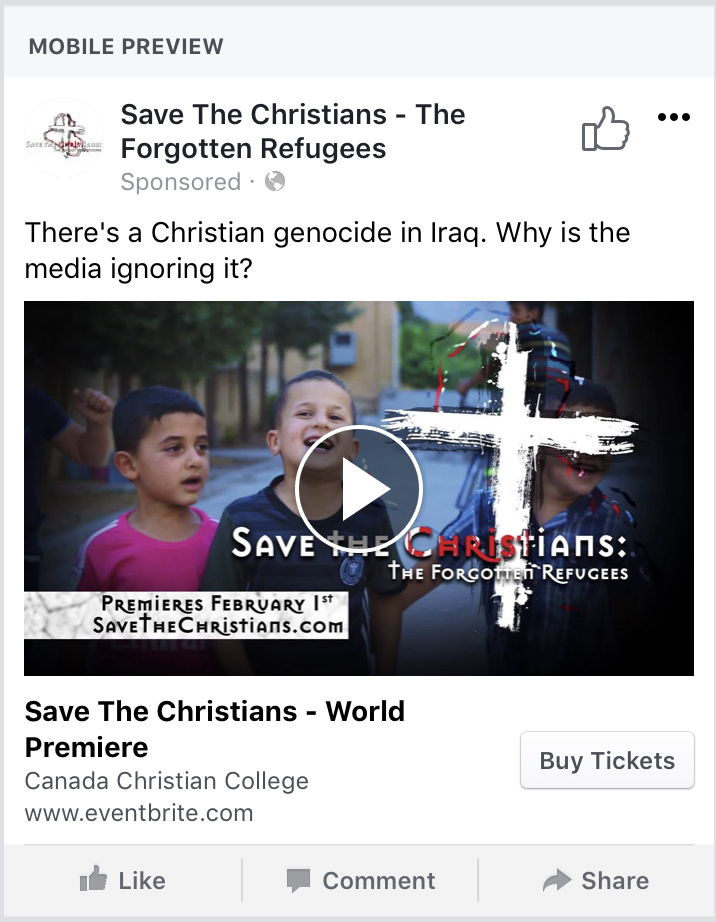 Since Facebook won't let us advertise — and won't tell us why — we need your help to spread the word about this film, which tells the world about a genocide being ignored by the rest of the media.

Thank you for helping us spread the word!

Sweden and Canada rank higher as the Best Countries In The Word over America in a recent global ranking.

GAB isn’t the fastest growing anything.

Well that wouldn’t be me, so no.

Perhaps it’s because I don’t post things that make me look like a fucking batshit crazy kook like saying Canada is doomed!
Terry MacLeod commented 2018-01-24 21:27:53 -0500
James Crockett of course. It’s friendly to islamophiles.
James Crockett commented 2018-01-24 19:54:48 -0500
Facebook works great for me.
Harold Hoff commented 2018-01-24 19:38:48 -0500
See you there!
Liza Faucher commented 2018-01-24 17:45:39 -0500
Lets rent a billboard truck.
robert snow commented 2018-01-24 17:21:02 -0500
Thanks for your great work.
Facebook has shut my account down. I commented on a recent National post piece containing a picture of the Trudeau brothers wearing shirts with Jesus and his face being covered with an emoji. When I saw the picture I thought of you and the mohamed pictures you published. My facebook/National Post comment read as follows: “wow! Imagine what would happen if Trudeau had a picture of Mohamed on his shirt”. The next day my account was deactivated. I then went in and created another account and made the same post, account killed in one hour. I set up another account then posted again. Account killed. If you want your facebook you had better be pro Islam. Not looking forward to M103.

Culture wars bring a rise in censorship — and not just by the left (GUEST: Laura Lynn Tyler Thompson)