WHATNOW? They got him, too? Binks is now a Marxist man-hater?

Is he even now perfecting his beta-male cringe, smugness, and apology skills?

A new bot for the revolution?

Still and all, modern Feminism is not completely, terribly wrong. If it were that simple, and all the answers blazed forth with light, and all the good people were over here, and the bad people over there, it would be easy to be right and good.

What does feminism get right, however partially? 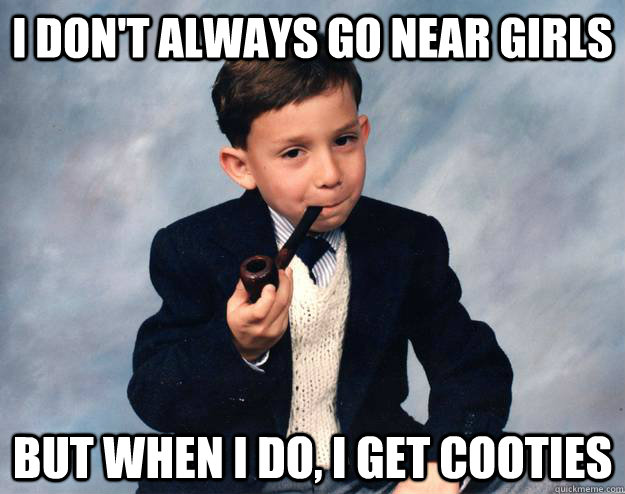 Cooties. Men and women, boys and girls are often puzzled, annoyed, attracted, disappointed by, mystified, dismissive, and yet obsessed with the opposite sex. Feminism sees & tries to answer this common human experience.

Our Longings. This "discovery" that things don't feel right, or complete, or satisfying, or good, is as old as human beings, and was formerly connected to "sin" and finity and longing for something, seeking truth and goodness and the infinite, and was always part of religion, morality, philosophy, and human being in a society.

Big Questions. Everybody ever asks basic questions about themselves, others, the order and meaning of things, life and death, the innate sense of mystery and spiritual life we all have. All humans also desire to be what we aren't -- and often, not to be what we are. What's it all about? How do I fit in, decode the meaning of life, and get on with it?

Kindness. Feminism says: part of the way forward is concern for others, thinking, purposeful activity, convincing others, commitment, and sacrifice. Feminism is right in this: things feel wrong, and any of us may need guidance and help along the way.

Feminism says: we all live in a tension between freedom and authority, and a continuum between conscience and truth. Feminism itself claims to be an authority of complete truth: we must submit all our freedom and ideas to that revolution.

Modern feminism is an attempted solution for the imperfections, failures, and disappointments of modern rootless and faithless women, finding that they and the world are somehow not perfect, happy, or good -- even when overloaded with stuff, safety, freedom, time and fun.

The feminists are right: there is something bent and wrong about human nature-- and thus each person-- in our relation with ourselves, one another, and the power that made all things.

Diagnosis: Is So Simple!

And it's a giant 'but' with warning lights and huge bells on it.

The feminist cure is poisonous and false.

Sure males and men are imperfect, sometimes selfish and evil sinners, and in particular ways hurtful to the girls & women in their lives and around them. Do tell. So are all females & women: to other women, men, and children.

All humans can be horrible to themselves and one another, and we often go bad to worse, and our attempted solutions are often tragically (or hilariously) worse in the end than the original problems. It's ALL there in the Bible. That's why Adam and Eve don't live happily ever after: that comes later. 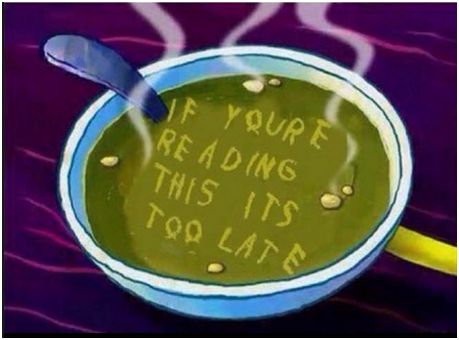 The deadliest delusions are mixed together with half-truths, good intentions, and the wrong solutions. This includes Marxism, which is what underlies most current Western feminism & progressivism.

However right Marx was here and there, his diagnosis and cure was ultimately mistaken, and did not take enough account of human nature, reality, and the positive changes of economies and society.

He thought ideological polarization, class-hatred & envy, and A Big Revolution was the way to fix everything.

Marx's original paper-thin passion for working people and the poor? It produced giant juggernaut dictatorships and bureaucracies which killed hundreds of millions of ordinary workers, farmers, and citizens.

Feminism takes Marx, and replaces the oppressed "workers" with "Women" as oppressed not by "rich/ owners" but instead by "Men" in a giant discriminatory conspiracy called "Patriarchy."

It's not only nuts, it's unjust & wrong, and contrary to the evidence (especially after a century of feminism in Western Societies), and the resulting anti-male consequences in reality.

Non-feminist facts (see below) must be mocked or ignored by the superior wimmins, since it doesn't fit the official narrative of female chauvinism, and man-hatred. 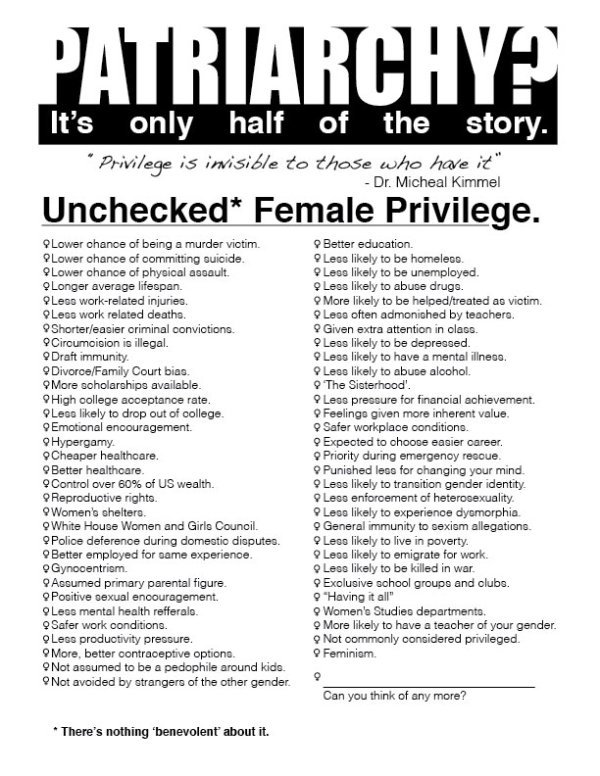 All The Things, Fixed

What about sin? Reduced to "sexism," which is a male thing.

All our longing and seeking? Boiled down to an "Equal Society" (but tilted in favour of women and girls).

All the mysteries, and human good and evil?-- mutated into how evil men are, even nice ones, because patriarchy.

Our imperfections are renamed "insufficient zeal for the revolution." Introspection collapses into endless Marxist/ Maoist 'self-criticism', until you are obedient mush.

Feminism is the answer-- now what was the question?

But Are Such "Women" Human?

The giant neon-flashing question shines forth -- where is female human nature in all this?

Are women -- as depicted by feminists -- even human beings in this light, when feminism is the all-forgiving all-judging replacement for God & religion?

Are women even capable of the "Do what I say, Not what I do" moral contradiction we all live with? Badness is always and only for inferior untermensch males? Do feminist women have moral choices, or are they like tiny children, helplessly caught up in the mean old man-storms of life, oppressed by the inferior man-beings, and even by something called "invisible rape"?

So feminist revolutionaries always point away from themselves, away from any moral or personal or human mirror, to point and shriek at external forces acting upon them, and not from within them. SHAME ON THE MENS!! #KillAllMen! 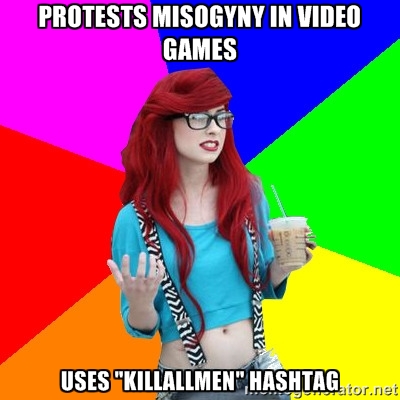 If women can say or do pretty much anything "because feminism", then unaccountable Feminists can run roughshod over their (non-feminist) victims. Here comes silencing of free speech, and dumbing down all discourse, and yelling. Too strong? Nope. 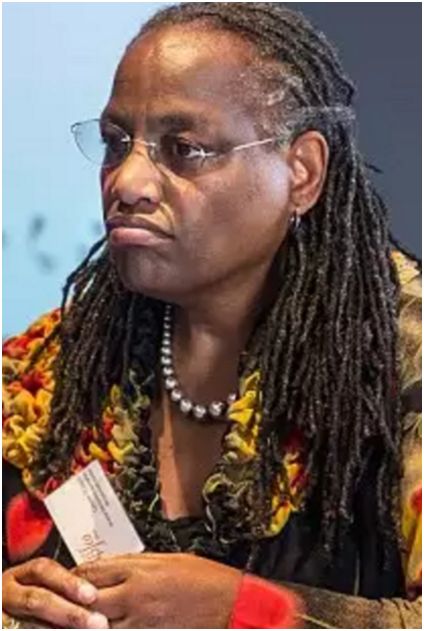 Witness the case of leading UK scientist and Nobel Prize-winner Tim Hunt, fired and shamed in his profession after a feminist lied about an awkward joke he made during a speech. Nasty-pants academic Connie St Louis (picture above) tattled and re-tattled on Dr. Hunt via Twitter, that his joke was a serious remark. Because toxic feminism, and Patriarchy!

A Twitter & interweb crapstorm ensues, the doc is fired, the lie is later exposed (along with several "irregularities" in her CV, including what appear to be complete fabrications), yet Mz. St. Louis stands by her slander, and has not been fired, disciplined, or held accountable for needlessly ruining the life of another person at the height of his career. Because feminism.

Her punishment? Praise! Harpy-woman even gets to yell on TV and throw around false accusations about hilarious anti-feminist gadfly & commentator Milo Yiannopoulos, because feminism, and man-cooties! 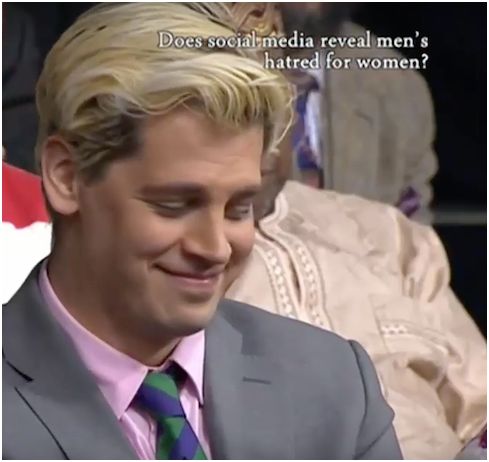 So: Connie St Louis... her feminism offers no apology, no reality, no truth, or mercy, or humility.

"Brothers and sisters, if a person is discovered in some sin, you who are spiritual restore such a person in a spirit of gentleness. Pay close attention to yourselves, so that you are not tempted too." (Galatians 6:1)

But where's the feminist revenge joy in that?

A life ruined, because a feminist bully lied, her mind so twisted by ideology to see things which aren't there. Even Dr. Hunt's wife has received backlash from the lie-storm. How disempowering!

But remember -- the real victim here is... teh feminits wimmins!

The Giant Hole In Reality

Yet the basic questions of existence remain ignored by the superficial socialists in skirts: Who & what are we? What do we say and do? What is good and bad about (all of) us? What are we like? Where do we come from? Where are we going?

When it comes to feminism itself: says who? Where's the actual evidence? Facts, proof, and fair-minded truth-telling trumps political or ideological tales told for political reasons of controlling the minds and behaviour of other people.

What kind of universe is such feminism?

Instead of the sky, and the stars, and the sun and the moon and the winds and the glory of what is in us and around us -- or the terror of the storm, the volcano, the tornado, and thunderous lightning -- we are to live in a grey concrete feminist-approved shopping mall with low ceilings and no windows, endlessly browsing at stores selling only the approved topics and products.

The walls are daubed daily in fresh menstrual blood, and paintings of lady parts, pictures of smirking women, and pictures of severed male privates, and dismembered bodies, lists of the crimes of men and female non-feminists, along with murals depicting dead babies, are all on display. 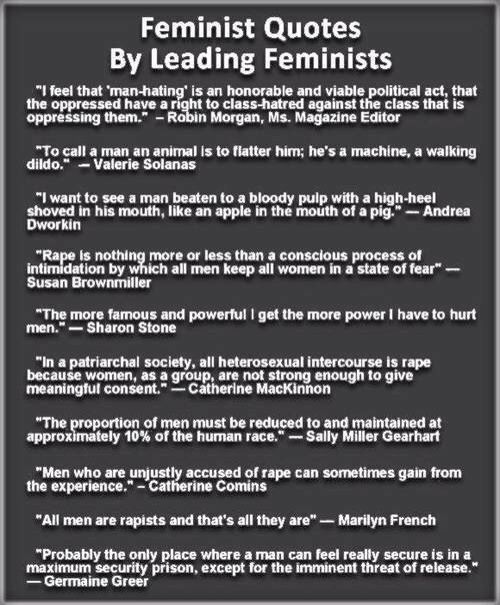 Wow. I don't want to live there.

If "Feminism is the answer.. now what was the question?" is the summary and total meaning of life, then humanity has officially gone insane, cut itself off from God, reality, love, truth, beauty, healing & reconciliation, and complementarity of the sexes forever.

It's a living death, where the big lie of feminism itself is the great oppressor of women, and everybody else.

Enjoy the future we deserve.

The RCMP is bringing out a new women's uniform -- with a Muslim hijab!
If you agree that this move is unCanadian and anti-woman,
SIGN THE PETITION at ShariaPolice.ca

You must be logged in to comment. Click here to log in.
Daniel Olchowecki commented 2016-02-01 13:43:00 -0500
I do not advocate abuse of any sort. That said, if men were half as bad as the feminists say, all women would be at home fixin’ sammiches, slinging beer and not saying peep. Good men do what you do, I think most women like us being masculine.
Mike Buckley commented 2016-01-31 08:09:47 -0500
Feminism is a religion. It requires faith not facts.
Glenn Craig commented 2016-01-30 21:14:09 -0500
Feminism in a nutshell….a commitee of lesbian lawyers will eventually prevail over and bring down the evil patriarchy……:-)
Lance Humphries commented 2016-01-30 08:20:18 -0500
Great stuff in here. I would put it all more simply. Feminists, like all extreme ideologies, are founded on “half the facts”. Lefty’s n feminists always point out the negatives, and none of the positives. It’s just that simple. And requires a simpleton to fall for it. I often challenge them to list all the GOOD things men have done, or, conversely, to simply stop using anything built, or invented, by men. It usually leaves them speechless. Can you list them all . . . . . ?