The Florida woman whose antics against an Uber driver went viral appeared on ABC Miami today to explain what happened.

In the video, Anjali Ramkissoon believed her Uber had come to pick her up, but it was actually intended for someone else. Enraged, Ramkissoon engaged in a physical altercation with the driver, kicking and slapping him before eventually going into his car. When inside she began to throw the driver's belongings out the window.

While on TV, Ramkissoon said “I'm trying to stay under the radar with a few friends. I didn't realize this was going to be such a big deal, I've been indeed suspended and I don't even know when I'm going to get back to work.” 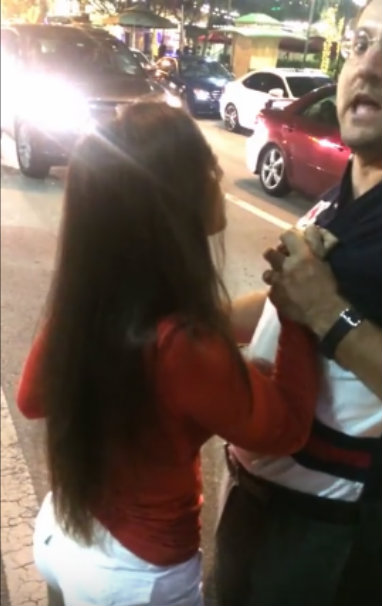 “I''m getting a lawyer and a public relations firm but I don't know if it's going to do any good. I had to change my cellphone number because strangers were calling to yell at me,” she explained.

Ramkissoon told ABC that she had just broken up with her boyfriend and her father had been placed in the hospital.

Watch and decide: do you think she should be forgiven?

Taxi cartels are trying to make competitors like Uber illegal.
Some cab drivers are acting like thugs -- but we're fighting back!
SIGN our petition at WeLoveUber.ca and tell the police to stop the harassment.

You must be logged in to comment. Click here to log in.
Peter Toth commented 2016-01-29 11:41:04 -0500
She made her faux apology by first explaining why she did it, and tried to gain sympathy from her story. If you make excuses, then apologize, it’s not an apology in any way shape or form! What we see here is a classic example of the difference between “remorse” and “regret”. She regrets her actions, because she was caught and now has to face the consequences. However, she has no remorse for her actions, as that faux apology clearly illustrates.
Mike Piesse commented 2016-01-29 00:13:48 -0500
Well I must say that this is far from a major issue … I have done stupid things before as I am sure many others have including those oh so outraged with her… Let’s throw the small fish back … This is not news this is gossip.. Leave her alone give her life back to her let her deal with all the bad that has come at her… We have far bigger battles to fight than this . I am sorry but this does nothing but give the rebel a bad look … It’s not news its gossip and serves no purpose …I think maybe an update on how the people of Flint are trying to survive may be more news worthy and could use the space given to a story that does nothing but feed the rebel nay Sayers… Love the rebel let’s not go where this type of story takes us
Dirty Harry commented 2016-01-28 19:03:37 -0500
Well if the Uber driver was satisfied with the restitution she paid him then I’d have to be ok with it too. But I still think that she still deserves at least one charge for her actions. Drunkeness is no excuse and forgiving is one thing but paying restitution to society by accepting your charge is also needed. This will curb this behavior.
Margaret McKee commented 2016-01-28 10:41:30 -0500
Boo hoo hoo. There is no excuse for what she did. My hat goes off to the Uber driver who did not have her charged but I would have. It is said that people under the influence of alcohol are not responsible for their actions. Does this make it ok?? Seems to me she thinks she is an entitled person with no regard for anyone but herself. Wonder if she was suspended with pay. The hospital had to suspend her to save face with the public so therefore she not only caused grief for the Uber driver but she put the hospital in a very uncomfortable situation. They certainly could not say " It’s ok what you did because you were drunk so just come back to work like nothing happened" No, the hospital was forced to take a stand. How unfair.
Charles Moulton commented 2016-01-27 23:06:05 -0500
No “she does this all the time”. Don’t let her off. That is the younger people now a days, and they have to learn.
Guy Fraser commented 2016-01-27 22:18:02 -0500
I don’t believe a word coming out of her face! She thinks she is superior to others and got caught and is now sorry because she is being made to pay for her arrogant nature.
She should be put on probation for 3 to 5 years and if she acts this heinous again she should loose her medical license.
Sharon Moore commented 2016-01-27 21:30:46 -0500
Sorry, not forgiven. She’s an idiot and deserves everything she gets. And that Uber driver deserves a medal.
james callaghan commented 2016-01-27 15:26:04 -0500
Men have got to put their feet down and deal with these women as if the roles were reversed.

Women know that they can get away with stuff like this because most men will just tolerate it.

Not me, I wouldn’t hesitate to press charges for one second, and sue if necessary.

Just remember, it always gets nasty when it ends, so plan your exit accordingly – nothing more than 6 months or you could end up with a butcher’s knife in your back.