You really have to wonder how full of insane hatred you have to be in order to say this: 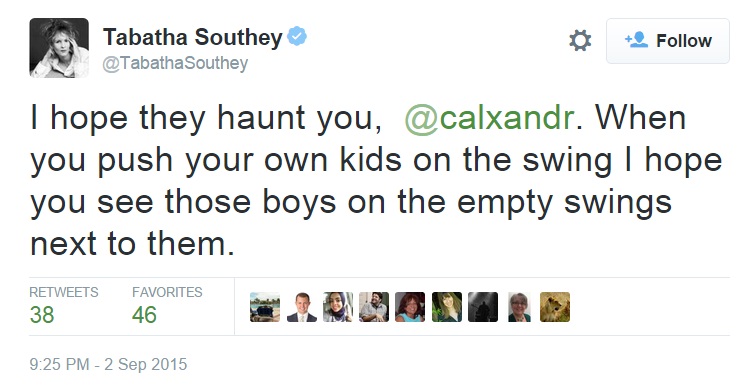 Trying to blame Conservative immigration minister Chris Alexander for the deaths of two young Syrian boys trying to escape with their family from the murderous ISIS like this is the vilest thing I’ve ever seen from the Canadian media. It’s hard to shock me on how low the media will go but Southey has set the new standard.

Southey doesn’t really care about people dying overseas fleeing these Islamic extremists, she cares about using their deaths to attack politicians she hates.

You must be logged in to comment. Click here to log in.
Anne Smyth commented 2015-09-08 14:22:23 -0400
I don’t know why anyone is surprised that a Globe and Mail “journalist” would twist the truth and make such an outrageous statement against Harper. The Globe and Mail used to be a reputable and respected newspaper. No Longer! It is a propaganda outlet for marxist leftists in my opinion. And the article proves it the way I see it.
Jason Bertucci commented 2015-09-08 13:44:35 -0400
This is the media once again wanting the news stories and the election to be all about their precious cause of unlimited immigration to Canada. A dead toddler has as much importance to the Canadian election as Trump’s hair piece is to the US election. Where was the media a year ago when Christians were being slaughtered in Syria. I guess they don’t count.
Lance Humphries commented 2015-09-08 13:05:49 -0400
She’s what Stalin refers to as a “useful idiot”.
Danniel Oosterman commented 2015-09-08 11:49:34 -0400
Of course she has every right to go full-retard like this but sadly it will be viewed by most left-leaning people as a brave and courageous sentiment. It’s gotten to the point where being right leaning in this country is equated with fascism (by those who have no idea what fascism actually means) . Our precious 4th Estate is has been nearly entirely subsumed by left-wing undercurrents that run not only deep, but with demonstrable partisanship to the point of putting their money behind it. From media to education we’re creating a generation of useful idiots; Ms. Southey has the honour of being near the front of the line.
Rick Plesnik commented 2015-09-07 17:48:43 -0400
I’ve said it before and will do so again. Time to start using “Law fare” against the liars and the spinners of the truth. May not be the “Conservative” thing to do, turn the other cheek as it were, however the time is past due!
Pavel Ananyev commented 2015-09-07 17:12:03 -0400
She wrote: “…trying to escape with their family from the murderous ISIS…” - This is not true. They sailed to Greece from Turkey. They were safe in Turkey. Their father just wanted to get to Europe for larger social assistance/welfare. More to that, their Canadian aunt NEVER filed to sponsor them. She filed to sponsor another relative instead.
Jay Kelly commented 2015-09-07 17:02:17 -0400
James, I think the one’s she was imagining on a swing were a bit younger than military age.
James Smith commented 2015-09-07 16:12:58 -0400
What a disgusting excuse for a journalist, did she ever take time to notice that most of these refugee’s are young men about military age
Wayne Allen commented 2015-09-07 14:46:50 -0400
Refugee migration is only the latest of the weapons that ISIS is using against the west. This is a hijrah, a holy movement in support of Islam. In this instance it is intended to increase the Muslim presence and power in the countries of Europe.
Here it is: http://www.independentsentinel.com/isis-threatens-to-flood-europe-and-elsewhere-as-libyan-refugees/
Notice how well our media and the Liberals and the NDP are supporting ISIS on this.
David Frank commented 2015-09-07 13:24:22 -0400
Tabatha Southey is pro-abortion. I can only wish her the same haunting but then, it wouldn’t be a swing but the whole park
Jay Kelly commented 2015-09-07 11:50:47 -0400
I am not sure Tabatha Southey’s tweet is worth repeating. It was really just directed at Immigration Minister Chris Alexander. Like her, I am sure he also has done some soul-searching in the last few days. I suppose the Rebel reposts the tweet here to raise the question for all of us: are we basically motivated by partisanship and hard-heartedness, or do we have the courage to be compassionate?
Vlad Johnson commented 2015-09-07 11:23:57 -0400
Take a look at that pic of tabatha southey – take a close look at those glossed over eyes and dark circles around them – this is one angry ditch pig.

And this is a made photo of tabatha southey – could you imagine what it looks like when it wakes up in the morning?
John Albertan commented 2015-09-07 11:06:30 -0400
In another life, she pushed a grocery cart.
Bill Elder commented 2015-09-07 11:01:42 -0400
Proving once again the least liberal thing you can find is a self-professed “Liberal?” harridan. People like this are just one trigger episode away from angry mob mentality. Until their heads explode when they realize al their tantrum taking was for naught, all you get is endless cerebral flatulence.

I’m not surprised that a sensation-obsessed media hires this type of intellectual sideshow geek to provide the endless 2 dollar freak show media has become.
Gerry Kelly commented 2015-09-07 10:10:25 -0400
This isn’t the first time that this poor excuse for a human being has been miles off base with her comments. Comments which her lemming lefties eat up and repeat as if it were gospel. Unfortunately the G&M doesn’t appear to have any desire to quash this type of irresponsible reporting. Need to start shame campaign against this twit.
George Luck commented 2015-09-07 09:18:37 -0400
Take a look at her face. She is the living embodiment of the term ‘vacuous’. Her only true emotion is hate. So typical of today’s Canadian left. I am sure that the Globe and Mail allow her to contribute to the paper because they feel she is ‘edgy’. They are wrong. She is ignorant and probably not too bright.
Nathan W commented 2015-09-07 01:40:14 -0400
Ministers of state have to make some very difficult decisions. I would be disturbed if they they were so inhuman as to not occasionally have the odd bad dream about the possibly negative effects of their difficult decisions.
Nathan W commented 2015-09-07 01:36:39 -0400
Vlad accuses Tabatha of having a hate problem, and then says he hopes she gets run over by a bus.

The hate problems are far worse on the right.
Ron Voss commented 2015-09-06 23:17:04 -0400
VLAD JOHNSON, you point out that Tabatha has an anger problem, which is very true, but sadly reveal the same, which is very common about the way leftists respond. Please don’t get angry with me over my concern.
Vlad Johnson commented 2015-09-06 20:11:48 -0400
This angry PIG tabatha southey fucked over Kids In The Hall Great Dave Foley. The lazy PIG with a vag tabatha southey received a legal settlement of 400% of his income – without batting an eye.

Yes tabatha, Canada hopes you get run over by a bus very soon your nasty reprobate. Oh and the hate spew toward the Conservatives is indicative of your internal anger that should make your tumors grow by the day. Rot in hell ditch pig!!!
Wayne Allen commented 2015-09-06 19:53:32 -0400
ISIS would have no problem with drowning a couple of boys just to make a good photograph. Funny how this photo turned up just at the right time. These people are being made homeless just to increase the Muslim presence in Europe.
Ron Voss commented 2015-09-06 18:47:05 -0400
T. BLACK, I think you are onto something with the refugee crisis provoked by ISIS being a way to rapidly transform the West to the benefit of Marxist NWO goals. Robert Spencer, who knows a thing or two about the true nature of Islam, explains hijrah, jihad by emigration, in this article:
http://www.frontpagemag.com/fpm/260019/hijrah-europe-robert-spencer
He points out: “The entire continent of Europe is being inundated with refugees at a rate unprecedented in world history. This is no longer just a ‘refugee crisis.’ This is a hijrah.”
Guy Fraser commented 2015-09-06 17:08:15 -0400
Sounds like actual hate speech to me!
Christian Inkster commented 2015-09-06 14:17:36 -0400
This is a fine illustration of the overconfidence and arrogance the left is filled with nowadays, and could very well be the start of their ultimate downfall, if not in this election but soon afterwards. As I’ve said elsewhere, if Mulcair or even Trudeau is given the premiership in October, I am going to be curious to see what many will think of either man within one to three years from now (looking at the popularity numbers for Kathleen Wynne, Hillary Clinton, and Barack Obama does not give reason to be excessively optimistic concerning this sort of thing).
John Matthews commented 2015-09-06 14:10:43 -0400
Ah, the joys of living in a free country, The Grope and Flail. Almost enough to make one pine for the days of Stalinism.
Keith Barnes commented 2015-09-06 13:14:43 -0400
This is one Dumb Bitch, is she not aware that the Father left the safety of Turkey just to get into a European Country, where he could get a new set of teeth for free.
Meanwhile other Muslim Country’s are refusing Muslim Refugees, they are scared of potential Terrorist attacks. Dumb Dumb Bitch.
Terry Black commented 2015-09-06 00:19:27 -0400
Keep in mind some pre-cautions for God’s sake it is not exactly like there is not like a lot of tyranny isn’t happening in the world right now….There is also reported to be a move of Extreme hiearchy of Wealthy Criminals that are pushing Socialist voting Refugees into North America – so that we lose our Democracies! That is why their ISIS Army is pushing these Refugees out it’s all part of the NWO plan! We could become overwhelmed with a Marxist style Religion, by multitudes of people who are trained to live under dictators’!
Check out who it is that finances these ISIS terrorists’!
Peter Netterville commented 2015-09-05 20:09:52 -0400
This woman, and I use the term loosely, will not be held accountable for that caustic green bile she vomits by the main stream media because the corrupt main stream media will cover for her because they too agree with her. What can be done about a left wing main stream media that has sold its’ soul to hate for the purpose of attacking the Conservatives with all sorts of vile lies?
Norberto Cabling commented 2015-09-05 01:05:34 -0400
Another one of the selfish!
Dave Bainard commented 2015-09-04 23:59:38 -0400
The only way to stop this refugee crisis is to stop ISIS. Maybe Southey can go over and talk with them. Take JT and some winter coats too.