The United States was hit with yet another ISIS-inspired terrorist attack on Monday morning in New York City. Though it was quickly revealed that the terrorist who launched the attack was a Bangladeshi ISIS supporter, Google quickly responded by indicating that it would censor information related to the suspect’s connection to the Islamic State or Islam.

When Twitter users began to tweet out information about the terrorist, CNET’s Alfred Ng tweeted, “none of this has been confirmed, but here it is on Google’s top results.” 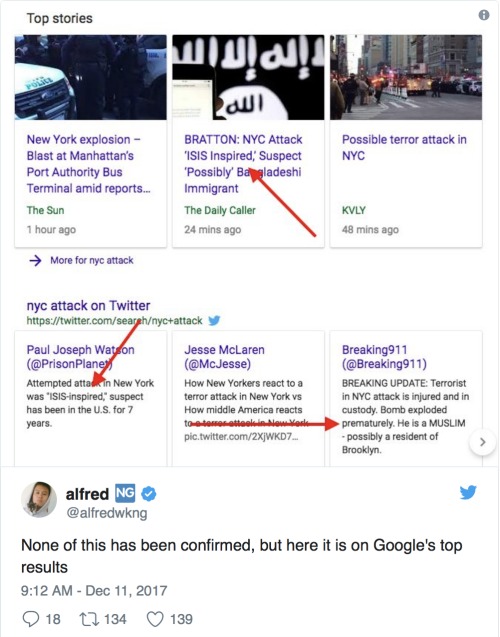 Danny Sullivan, Google’s public liaison for search, immediately responded by commenting, “passing out along to our teams to look.” This suggests that Google would look at removing the information from its search results despite it being completely accurate.

At the time that these tweets went up, correct reports had already linked the terrorist to ISIS. Despite this, Google decided that it was more important to be politically correct than to actually let people know what motivated this attack. Incidents like this only give terrorists more power because it downplays the threat that ISIS poses.

This is just the latest example of Google working with the left to censor or silence conservative voices. The Hill reported that back in October, conservative education site PragerU filed a lawsuit against Google and its subsidiary YouTube, accusing the video site of censoring its online videos because of their political leanings.

“Watch any one of our videos and you’ll immediately realize that Google/YouTube censorship is entirely ideologically driven,” Dennis Prager, PragerU founder, said in a statement. “For the record, our videos are presented by some of the finest minds in the Western world, including four Pulitzer Prize winners, former prime ministers, and professors from the most prestigious universities in America."

It's important that we expose Google and hold the search engine accountable for what they are doing to conservative voices.

You must be logged in to comment. Click here to log in.
Liza Faucher commented 2017-12-12 14:44:53 -0500
I don’t ‘google’ anything. But the masses do. They don’t dig and they only read sound bites. Most people are too busy or lazy, google knows this. However they can’t keep what is really going on from all of us.

It certainly is significant that they are collaborating with governments and globalist totalitarians in an effort to control the narrative.
Wayne Gilraine commented 2017-12-12 03:59:59 -0500
We can, and perhaps must, know that Google, the one that seems to track your every move, is not the only search engine. Thank goodness for competition.
Liza Faucher commented 2017-12-12 02:45:01 -0500
…and there is no way the globalist socialist/Islamic alliance has anything to do with it. Cough, Muslim Brotherhood/ cough UN elites, empty vessel politicians. Global, totalitarian, social and economic control.
We haven’t seen the likes of this since ….who would have thought that the children of those who fought for freedom last time are, in their Autumn years, going to have to deal with the same enemy again. Same supremacist enemy with a modern approach. Soros must be absolutely giddy with the irony.
Drew Wakariuk commented 2017-12-12 01:57:32 -0500
Why do these POS companies think that the truth will stay hidden if they do not report it? Do they have some magic wand to change reality? And then they will wonder why their demise will happen.
NO ONE IS TO BIG TO FAIL!
Maurice Potvin commented 2017-12-11 21:03:33 -0500
Since 9/11 – IN THE NAME OF ISLAM (SATAN): 34,476 Attacks, 224,111 Killed, 303,588 Injured that we know of.
Dan Mancuso commented 2017-12-11 21:03:06 -0500
It is nightmarishly frightening to consider where a combination of inevitable, improved and more ‘effective’ technology and techno-infrastructure (transhumanism, etc.), pure fascist intent, and a captive client, could take us all in the near future…given what these ‘business’ players of the big business/big government fascist cabal have already been caught at…like FaceBook, Google, Twitter and YouTube..caught at! Like taking us all to one of those lefty-utopian fairy-dust lands…and it’s dystopian nightmare reality.
Things have a way of changing very quickly and very drastically in life sometimes.
Look at the NAZI Blitzkrieg – from Poland’s perspective…
The Globalists are going to have to make the BIG-MOVE sometime, from the present covert fascist state that is Canada, to an overt fascist state…it’s only a matter of time.
So when? And how?
And what can we do about it?
The Polish Cavalry was one of the best in the world at the time…
colin cramton commented 2017-12-11 18:46:38 -0500
Political Correctness is fascism disguised as sensitivity.
Glenn Craig commented 2017-12-11 18:25:49 -0500
How incredibly POWERFUL of GOOGLE…through money and censorship they will buy and become the truth and NOBODY will ever figure out what the truth really is….