Today on Twitter, various Jihadi groups have been promoting a long awaited speech by the leader of the Islamic State, Abu Bakr al-Baghdadi.

(The video Bagdahdi made, really an audio of his speech over an image, is temporarily not online but will be replaced with a working copy soon)

Here is an excerpt of the video with subtitles where the Caliph delivers the Islamic equivalent of a Christmas message:

The speech is in Arabic and should be translated soon. But it seems that the salient part, the instruction for observant Muslims to murder random people in the West, was part of the 31 minute diatribe against Jews, Christians and infidels.

BAGHDAD (Reuters) - A new message purporting to come from the spokesman of Islamic State calls on followers to launch attacks on the United States and Europe during the Islamic holy month of Ramadan, which begins in early June.

"Ramadan, the month of conquest and jihad. Get prepared, be ready ... to make it a month of calamity everywhere for the non-believers ... especially for the fighters and supporters of the caliphate in Europe and America," said the message, suggesting attacks on military and civilian targets. 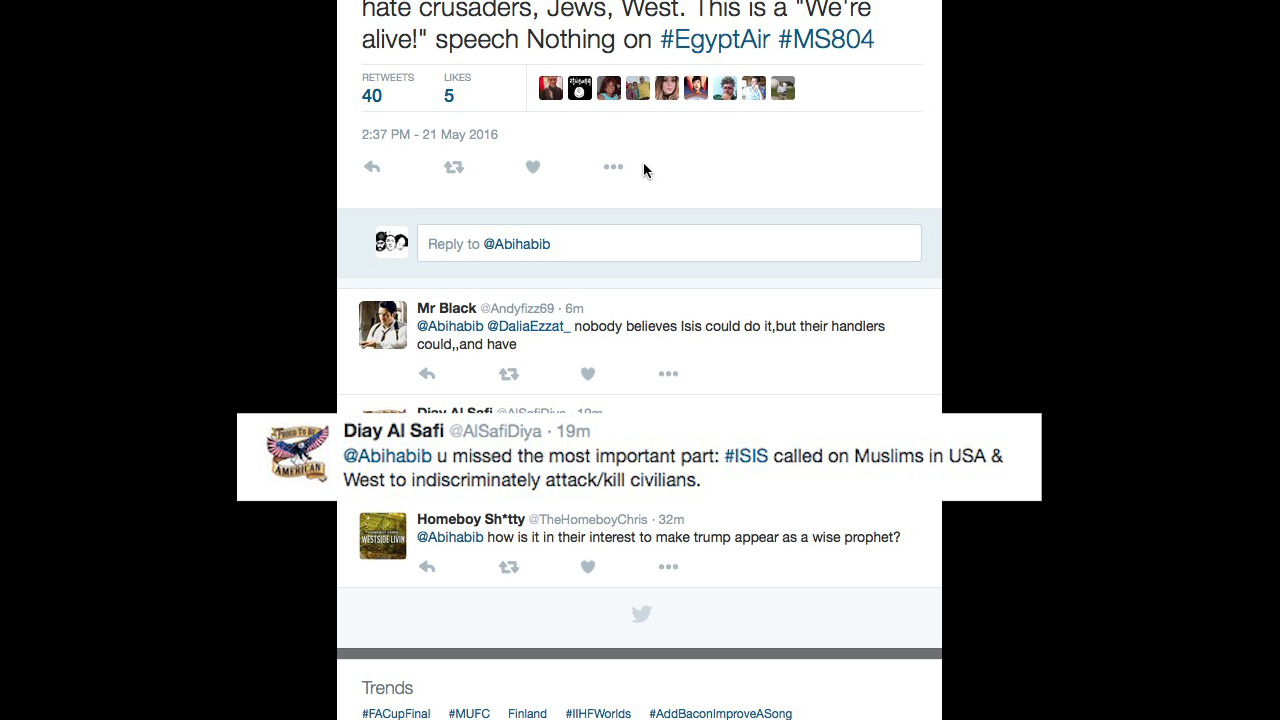 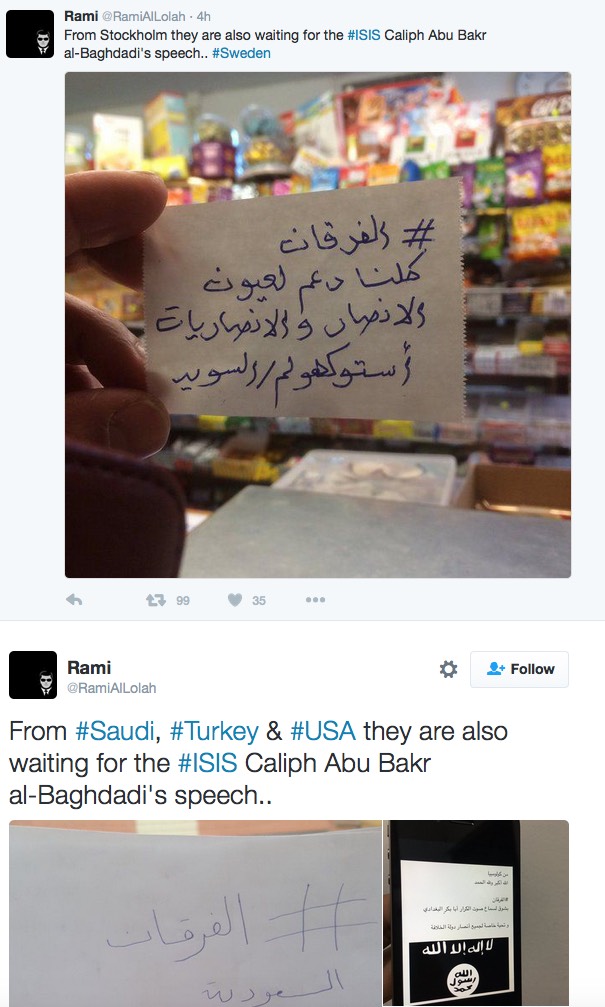 The next week or so it may be worthwhile to exersize more than the usual level of situational awareness.

Source: troop.com
DJBT and STPC
Daniel Devries commented 2016-05-23 19:16:16 -0400
Ron,
What are fundamentalist Christians doing that is so bad? Are they blowing themselves up, machine gunning crowds of people, beheading those of different faiths, or going out and inciting others to do the same in the name of their religion? Fundamentalistso are those that go back to the basics of their religion, often called radicals by the more liberal members of the same religion. However, if the fundamentals of any religion involve a ‘convert or die’ ethos, could it not be argued that the religion is at fault?

Everyone else, you should check out the video ’Ding done, Jihadi Witnesses on YouTube.
Cathy R commented 2016-05-23 16:58:56 -0400
This is why I can’t stand looking at anybody who is obviously with this islamic death cult, the hijab, niqab wearers, the goat legged wearing those long shirts etc. Anyone who is a member of an organization that promotes death to all people who aren’t muslim is just as bad as the professional beheader, carrying out sharia law from the middle east who does this on a daily or weekly basis. Yes, let’s invite 1,000,000 more of them into Canada and give them all they need for free for the rest of their lives so they can plan terrorist attacks, including political, against us.
David White commented 2016-05-23 12:19:13 -0400
Robert Raymond: Well, that pretty much sums it up, with one slight omission on your part. Somehow Rachael the Nicotine Queen has to earn mention in such posts. She had her arms wide open to accept Justin’s guests, and her stunned antics in general should not exempt her from earning our wrath at all times. Remember Justy and the libtards "inclusion"policies, so lets include the western version of Wynne as well. Misery deserves company.

DJBT and STPC
Libs Rmorons commented 2016-05-23 12:14:31 -0400
Hey Ronnie, you stupid Liberal Pedo. You do realize that there were no attacks in France and Belgium until they let your Pedo friends gain a foothold. Man are you stupid. I seriously think lefties are born idiots.
Elton Braun commented 2016-05-23 12:09:40 -0400
Ron C please define the term ‘radical Islam.’
Robert Raymond commented 2016-05-23 10:59:10 -0400
Ah David, leave poor little Ronnie alone. He and Sean are out there somewhere in a circle jerk fantasizing about Supreme Dictator El Bow of House of Commons Masher fame and his wife the lovely hybrid life form, miss Sophie the Pig Cow.
They are waiting to inherit two thousand Muslim virgins when they die since they were promised this by their Muslim masters and El Bow for being MUSLIB trolls.

Muslibs are a new unique life form indigenous to Canada. They are any members and followers of the Liberal party who are apologists for Muslims, Liberals, the Supreme Dictator Seneor El-Bow, Sharia Law and WYNNIE the Shit.

DJBT and STPC
David White commented 2016-05-23 09:56:35 -0400
Ron Christensen, you truly are the village idiot. You really should fuck off to a CBC site where you have a chance of fitting in. Might I remind you, the MAJORITY of Canadians didn’t vote for the galloping wanna be dictator in Ottawa either. And he-she-it is the real embarrassment. The stain on Canadian culture that this liberal government is leaving can only be matched by the stain in Just’s pants when his girlfriend Butts strolls into the room! Thank God for Ezzra and the Rebel.

DJBT and STPC
Ron Christensen commented 2016-05-23 07:57:16 -0400
I suggest radical fundamentalist Christians are the real problem. They are intolerant and blindly ignorant to the fact that radical Islam is the problem. It is a cult like atmosphere in here with most of the Levant sycophants. The majority of Canadians do not buy his or your idiocy and most would be embarrassed to even know the general attitudes in here. What a stain on the Canadian culture some of you hateful ignorants are.
Ron Christensen commented 2016-05-23 07:47:58 -0400
Gosh Dieter Cunth, where are all the attacks here in Canada? I’m hiding under a rock so I can be safe. You are a damned whacko nutbar.
Elton Braun commented 2016-05-22 23:19:11 -0400
Ron C. says “Islam is not the problem. Radical Islam is…” I would suggest all the Ronnies are a BIG part of the problem.
Dieter Cunth commented 2016-05-22 17:24:51 -0400
Attacks will take a wide variety of forms. They need not be elaborately staged attacks. As Cologne proved, they can be sexual assaults and muggings. I suggest that hit and run auto collisions can be attacks. And one need not kill their target. Causing them injury, costly property loss, and other hardships will also be considered the fruits of Islamists’ efforts. Look for a sudden epidemic in any of the above.
Drew Wakariuk commented 2016-05-22 17:17:30 -0400
LIBS RMORONS you beat me to that comment, i am sure if Ron C has a GF or wife Justins pic is on her back.
Robert Raymond commented 2016-05-22 17:12:08 -0400
Hello everyone,

There are only three kinds of Muslims, the radicalized ones, the ridiculous ones and the really good ones, the dead ones.

Now I have to clean off my computer screen—coffee. What a joke.
Bill Elder commented 2016-05-22 14:06:18 -0400
If I was a globalist culture war general, and I was looking for a quick way to crack the cohesive bonds of nationalism in western pluralist democracies, I pay some madman like this guy to make internet screeds telling the west ALL muslims are violent zealots coming to cut your throat.

Just watch the resulting reactions and escalating tensions in the US and EU.
Rick Plesnik commented 2016-05-22 12:56:45 -0400
John Landry said: “If most Muslims didn’t support Baghdadi you’d hear their protest as we did regarding Ontario sex education. But they are very quiet about such speeches from extremists.”

There are no “moderate” muslims. Once commanded by the devil worship known as Islam, they will ALL act! The preference for violence is contained within their “holy” book, the Koran. This is not in dispute. Need more be said?
John Landry commented 2016-05-22 12:45:31 -0400
If most Muslims didn’t support Baghdadi you’d hear their protest as we did regarding Ontario sex education. But they are very quiet about such speeches from extremists.
Keith Barnes commented 2016-05-22 12:44:56 -0400
The real problem is Trudeau and his idiotic plans to swamp Canada with followers of this Death Cult. A Political Platform, not a Religion, with full intention and with Trudeau’s help, to take over our Country.

Our first priority is to stop, END Trudeau’s reign of stupidity and his agenda of renewed population.

If Canadians do not stop him, he sure as hell will stop us.
Libs Rmorons commented 2016-05-22 12:39:10 -0400
It is time to drop leaflets to warn those that can read (not Muslims) to get out and then nuke the place. Let’s call it what it is…a failure for humanity. We don’t need their oil anymore so we can do without for the 100 years that the area will be uninhabitable. It would also be a good time to organize tours for our pedofile left to be in the area handing out said leaflets. The IQ in the world would raise dramatically if we were to rid ourselves of idiot Muzzies and lefties.
Rick Plesnik commented 2016-05-22 12:08:22 -0400
How long before the Liebranos offer this guy sanctuary and a Cabinet Post? I see the trolls are attempting to defend the indefensible again. Who is paying you trolls to spout such treacle? CBC, George Soros, Tides Foundation? C’mon ’fess up!
Liz Rosie commented 2016-05-22 11:58:21 -0400
Good post Peter.
It will be interesting and scary to see just what its going to take, how far its going to go. Look at Paris after Bataclan, or New York 15 years after 911. Why do we still refuse to defend ourselves and continue to make excuses for Islam. The very least we could be doing as a country is demanding that those Muslims here respect our laws, and conform to our society. All these accommodations of Islam only makes them believe we won’t mind being an easy mark when the time comes. They think we are stupid, and if we let it continue they will be right.
Jamie MacMaster commented 2016-05-22 11:55:18 -0400
BRAVO ZULU.
I just can’t figure out why the little tits are wasting time here – they should be home getting their goat-suits fluffed.
Bravo Zulu commented 2016-05-22 11:14:06 -0400
@ Ron Christensen commented 2 hours ago
Islam is not the target. Radical Islam is, but you racist bigoted ignorant fools will never learn because you just cannot fix “stupid”. Wow, Dizzy Levant sure attracts some “pieces of work”. I’ll bet the radical dick head is proud of himself.
——————————————————————————————————
Just think of how high people like this push the ratings for this site.

Ronny – got any more friends you can put on the “trolling pay roll”?

This site is becoming world famous – thanks in no small part to the trolls.

Got to love what they do – because they bring in the traffic.
Glenn Craig commented 2016-05-22 11:00:38 -0400
I wish Justin would live up to his election promise and er um engage um er these um er radicals er um in dialogue er um on social media ….and fix this like he promised he would.