Robert Conquest, the legendary historian who first illustrated the true extent of Stalin's crimes, passed away last week. So, it's once again safe for Russia's English-language propaganda outlets to start whitewashing Old Joe: 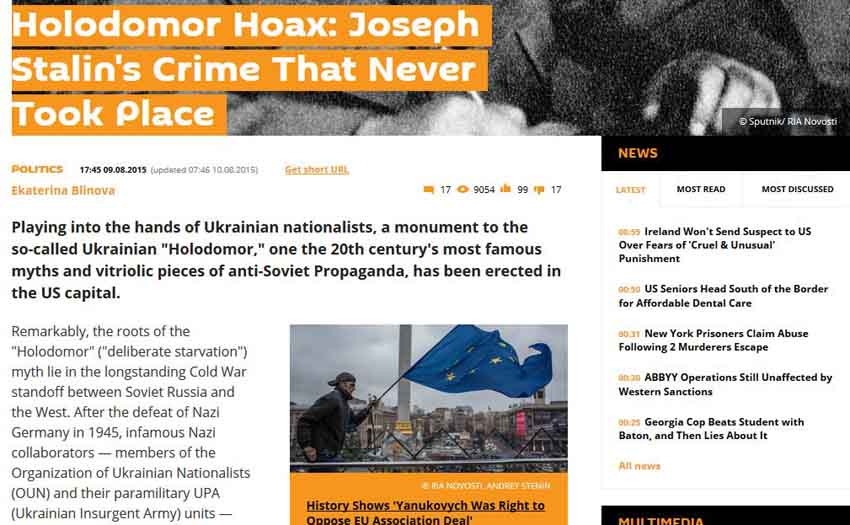 What, you didn't know the so-called "Holodomor" was actually a giant hoax concocted by the CIA and former Nazi collaborators?  Sputnik got together a bunch of fringe "historians" who know what really happened. Or, in this case, didn't happen.

The fringiest character cited by Sputnik is a guy named Grover Furr, author of the seminal classic Blood Lies: The Evidence that Every Accusation Against Joseph Stalin and the Soviet Union in Timothy Snyder's Bloodlands Is False. Furr, a professor of English literature at Montclair State University, earned minor notoriety a few years back when he publicly insisted that Josef Stalin was the first guy in 2,000 years untarnished by sin:

Like Arthur Butz, the electrical engineering professor who moonlights as a Holocast "revisionist," Furr uses his expertise in an area other than history as a way to lend credibility to his genocide denial. (The Katyn Massacre? Totally never happened.)  Hooray for tenure.

The Russians have gotten pretty good at producing English-language agitprop.  Sputnik, as Voice of Russia radio was rebranded a while back, has a slick website, and the RT "news" channel boasts production values close to, if not equal to, CNN. But the content is so blatantly pro-Kremlin propaganda, you'd have to wonder who'd be dense enough to fall for it.

@andrewsberry68 Try Russia Today. Free of Royal Wedding and more objective on Libya than most

You must be logged in to comment. Click here to log in.
Deborah Graupner commented 2015-08-13 11:08:18 -0400
Dan Mancuso – I agree with you, Liberalism is a mental disorder. And it is certainly a great cover for moral stupidity!
Dan Mancuso commented 2015-08-13 00:13:52 -0400
“… the content is so blatantly pro-Kremlin propaganda, you’d have to wonder who’d be dense enough to fall for it.”
Who?
The liberal left, that’s who. And they don’t get that their Brave New World indoctrination is leading them – and us – to totalitarian global fascism…
Liberalism is a mental disorder.
Andy Neimers commented 2015-08-12 22:41:32 -0400
Well now!… That should be “fun” watching the dear comrades trying to spin their way past Solzhenitsyn’s 1973 "The Gulag Archipelago or the encyclopedic 1997 “Black Book of Communism”… And I suppose there’s the nasty fact that there are Vietnamese still alive who can speak to the post war executions, Cambodians who can speak about “the killing fields”, old Poles who can still talk about Katyn, or old Latvians who can speak about the execution of officers at Lietene… Good Luck Tovarichi!…
Jerry Pasternak commented 2015-08-12 12:44:46 -0400
Once again the deniers of communist and nazi atrocities are attempting to confuse historical facts with their propaganda. The communists are responsible for more mass killings than any other group and the nazis come in at second place. RT and its allies are tools of Vladimir Putin and his Russian imperialists who need to distort history to justify their regimes. RT is the CNN of Russia and it is very slick at telling stories that that fits the agenda of its masters of deception. Keep an open mind when you watch or read revisionist history being spoon fed to unquestioning audiences. The facts speak for themselves.