(Originally published September 18, 2015) Omar Khadr, the convicted Al Qaida war criminal who is out on bail pending a long-shot appeal, is communicating with other Al Qaida activists he met while detained in Guantanamo Bay.

Here's a photo, taken from a pro-terrorist Facebook page: 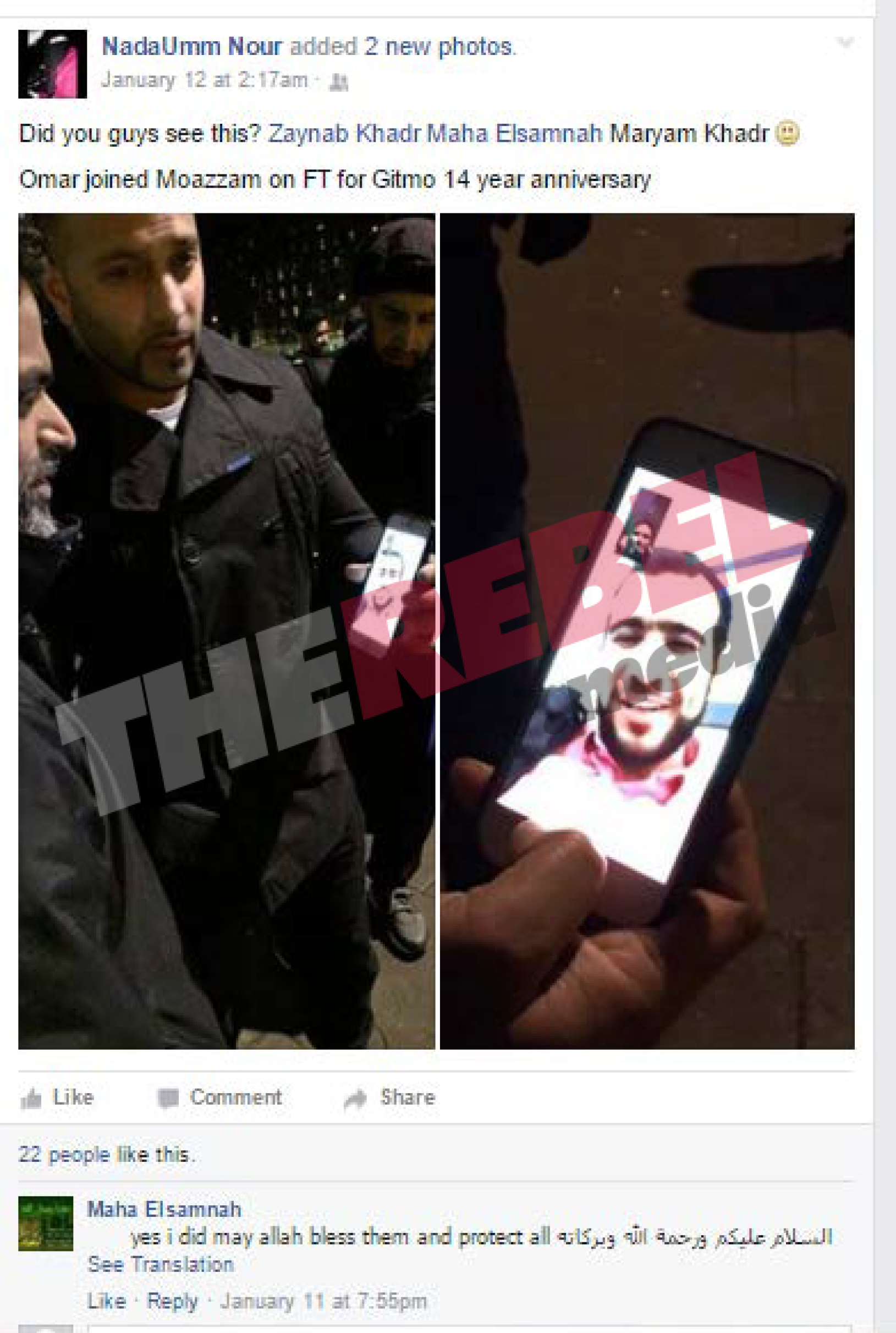 (September 25 UPDATE:) Our poll results are in!

On removing the tracking bracelet on Khadr’s ankle, 67% of Canadians disagree, 45% strongly.

On removing the police software on his computer to allow them to monitor what he’s doing, 71% of Canadians disagree, 49% of them strongly.

And 60% of Canadians oppose his right to fly on jets — with a majority of Canadians in every province opposing this:

In a shocking attack on public safety, an extremist judge in Edmonton has removed essential public security protections from Omar Khadr's bail conditions.

According to Justice June Ross, Khadr — a convicted murderer and an unrepentant member of Al Qaida — should now be able to fly on Canadian passenger planes and can visit his terrorist family in Toronto. He no longer has to wear a tracking bracelet on his ankle and police surveillance software on his computer must be removed.

This isn’t just run-of-the-mill soft-on-crime “justice”. This is an outright pro-terrorist ruling. It truly puts Canadian lives at risk. It would be no different than putting Paul Bernardo back on the street. This extremist ruling must be appealed by the government.

And of course Omar Khadr himself murdered Christopher Speer, a U.S. army medic, leaving his wife Tabitha Speer a widow, and their children Taryn and Tanner fatherless. Khadr later bragged to guards at Guantanamo Bay that murdering Speer was the greatest moment of his life.

Khadr confessed in great detail to his terrorist activities and the murder. In addition, captured Al Qaida propaganda videos show Khadr gleefully assembling roadside bombs, of the sort that killed many Canadian soldiers in Afghanistan.

Would YOU want to be on a plane with Omar Khadr? Of course not.

Please sign our petition to demand that the government appeal this extremist decision.

But that's not all.

Please also help us crowdfund an opinion poll to demonstrate what real Canadians think about letting Khadr fly on jets, without an ankle bracelet, without police surveillance.

There have been a lot of extreme court rulings. But this is such a blatant slap-in-the-face. We’ve got to get this murderer back in jail.

PS: Get the truth about Omar Khadr the rest of the media will never tell you -- plus documents like his confession and guilty plea -- only at our special site, KhadrFacts.com

We demand that the government appeal the court ruling by Justice June Ross that removes the public safety provisions from the bail conditions of Omar Khadr, the convicted terrorist, murderer and war criminal.