Once again Liberal leader Justin Trudeau shows his complete lack of judgement, this time by touching the stomach of a pregnant Liberal candidate:

The mom-to-be in this case, Liberal candidate Christine Poirier, said she had no problem with Trudeau’s friendly gesture, one that occurs several times a day with strangers as she canvasses her Montreal riding for votes.

“It was a perfectly natural, normal gesture and I really don’t mind having my belly touched,” she said.

I’m far from being a feminist-Nazi but touching a pregnant woman’s stomach is considered a massive invasion of a personal space and even in some cases, deemed illegal:

Rubbing a woman’s pregnant belly is more than a touchy issue in Pennsylvania — it’s illegal.

The awkward experience for moms-to-be everywhere falls under the state’s harassment law.

The Liberals dodged a bullet that this girl wasn’t preggers: 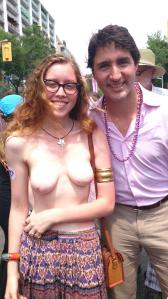