Investigators believe the man sucked out of a passenger jet over Somalia was a suicide bomber who smuggled his device on board in his wheelchair.

The suspected terrorist, believed to be part of the Somalia-based Islamic group known as Al-Shabaab, may have faked a disability to con his way through security checks at Mogadishu airport, the Wall Street Journal reports, citing a Western diplomat briefed on the investigation.

The man who died falling from Daallo Airlines Flight D3159, which was forced into an emergency landing following a suspected explosion five minutes after take off on Tuesday, has been named as Abdullah Abdisalam Borleh, 55, from Somaliland—but it has not been confirmed if he was the suicide bomber.

Survivor Hassan Mohamed Nur told the MailOnline: “I saw the passenger, a man in his early 60s, get sucked out of the plane. There was a huge bang. A big hole appeared in the side of the jet and the man disappeared through it.

“One minute he was sat in his seat, the next he was gone. He’d been sucked out of the plane.

“People were screaming. We all thought we were going to die.” 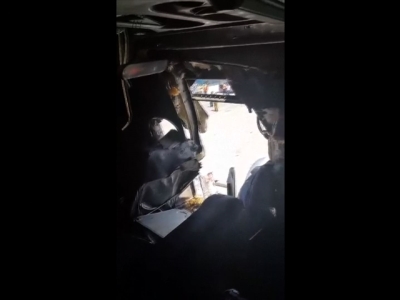 Two U.S. government sources have claimed that early forensic testing had found possible traces of the explosive TNT on the Airbus A321 aircraft, Reuters reports. But officials are urging caution as such tests have a high false-positive rate, and more tests are ongoing.

Daallo Airlines, the national carrier of the Horn of Africa country of Djibouti, said on its website: “Pilots managed to land the aircraft back (in) Mogadishu Airport safely and without any further incident. All passengers, except one, disembarked safely.”

Two passengers are reported to have been taken to hospital with minor injuries.

Al-Shabaab, which has carried out regular attacks on officials, government sites and civilians in Somalia, and was behind the infamous Westgate shopping mall assault in neighbouring Kenya in 2011, is yet to claim responsibility for the suspected bombing.

VISIT our NEW group blog The Megaphone!
It’s your one-stop shop for rebellious commentary from independent and fearless readers and writers.

I just had to read that as I was taking a sip of coffee. Now I have coffee on my keyboard. Good one! ;o)