To call it a media horde would be an understatement.

An encampment of TV cameras, reporters and microphones has been set up outside the Elgin Street Courthouse in Ottawa for the trial of Senator Mike Duffy. 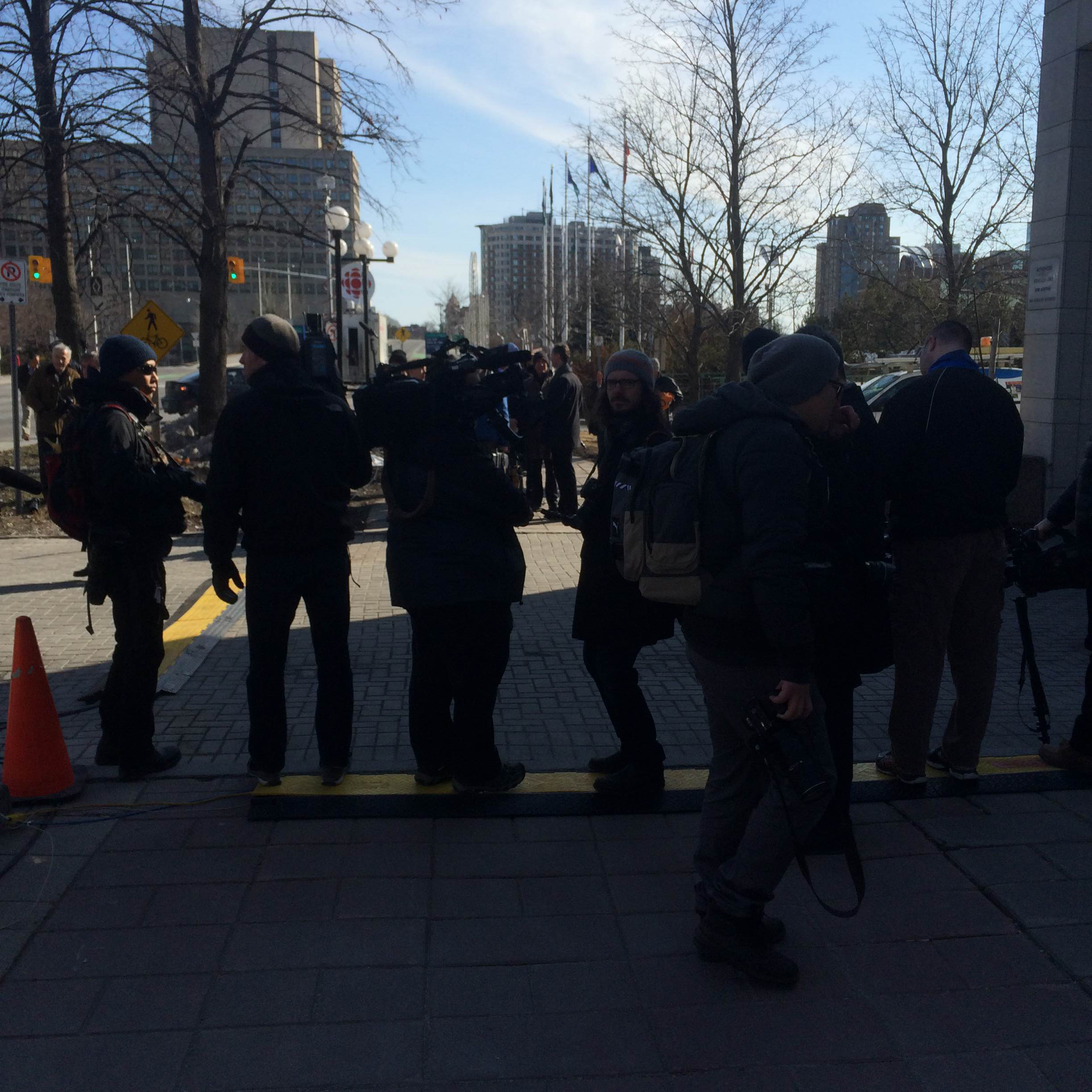 I've spent a lot of time in this courthouse over the last 12 or so years covering murder trials, terror cells and more and I've never seen anything like this.

Duffy's arrival on scene was met with a throng of cameramen walking backwards, reporters yelling out questions asking "The Old Duff" how he felt. 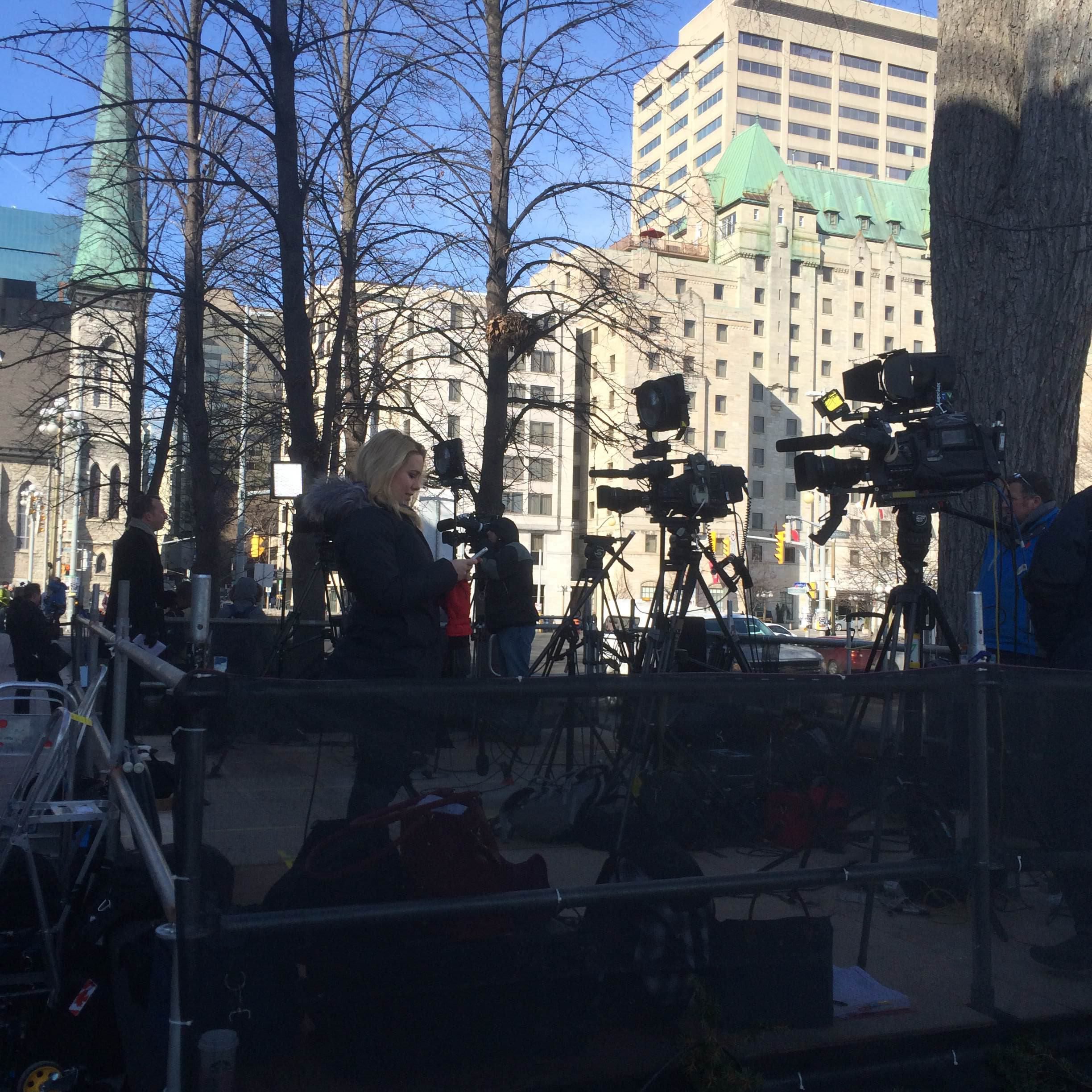 Duffy made no comment, his lawyer told reporters they would say what needed to be said in court.

Inside the courthouse, the room where the trial will be held is packed to capacity, an overflow room has been set up accommodate the media and onlookers. 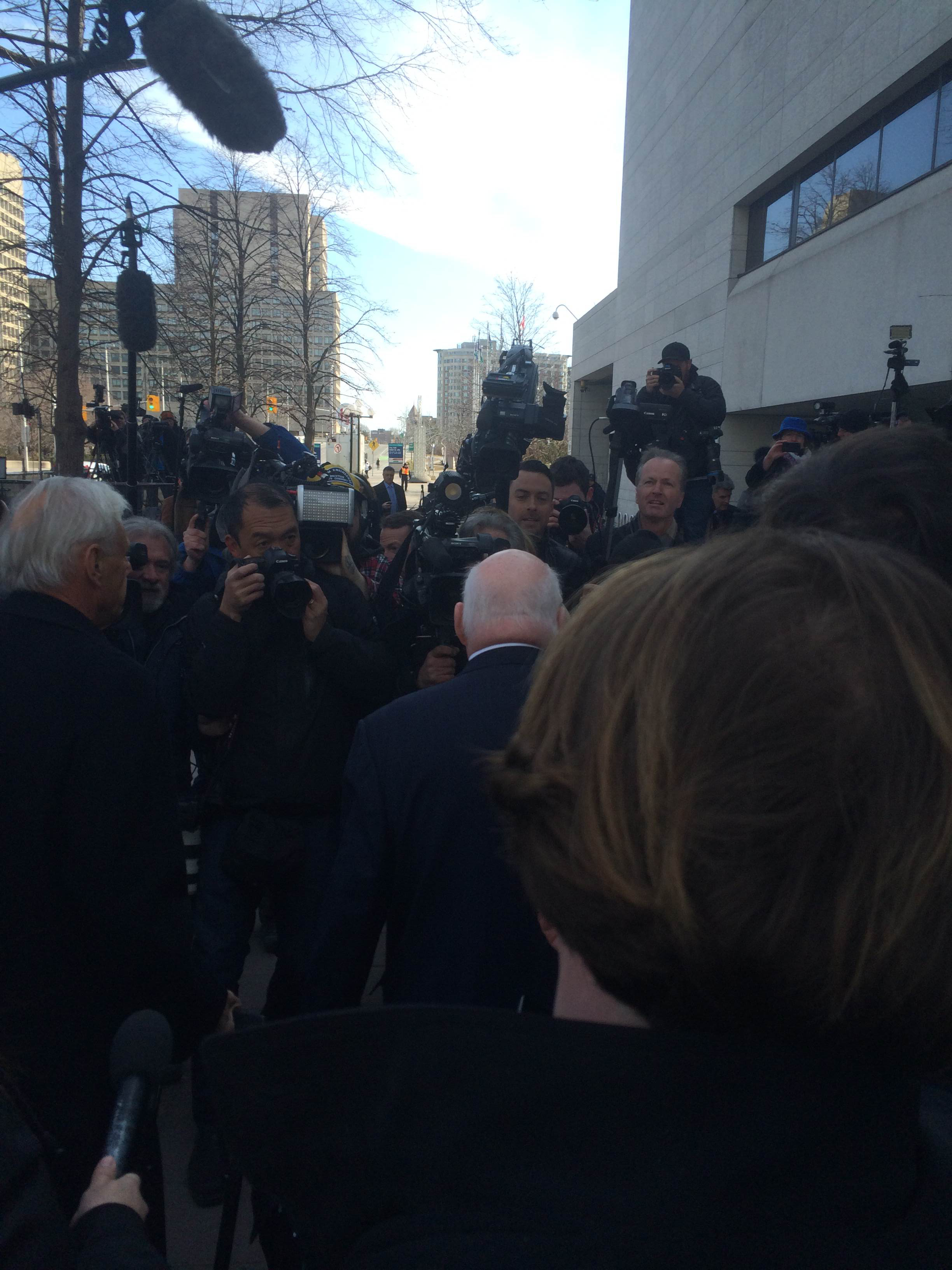 Duffy faces 31 charges related to living and other expenses charged to the Senate that prosecutors say is worth a little more than $90,000.

The former broadcaster maintains he is innocent and the trial will prove that. 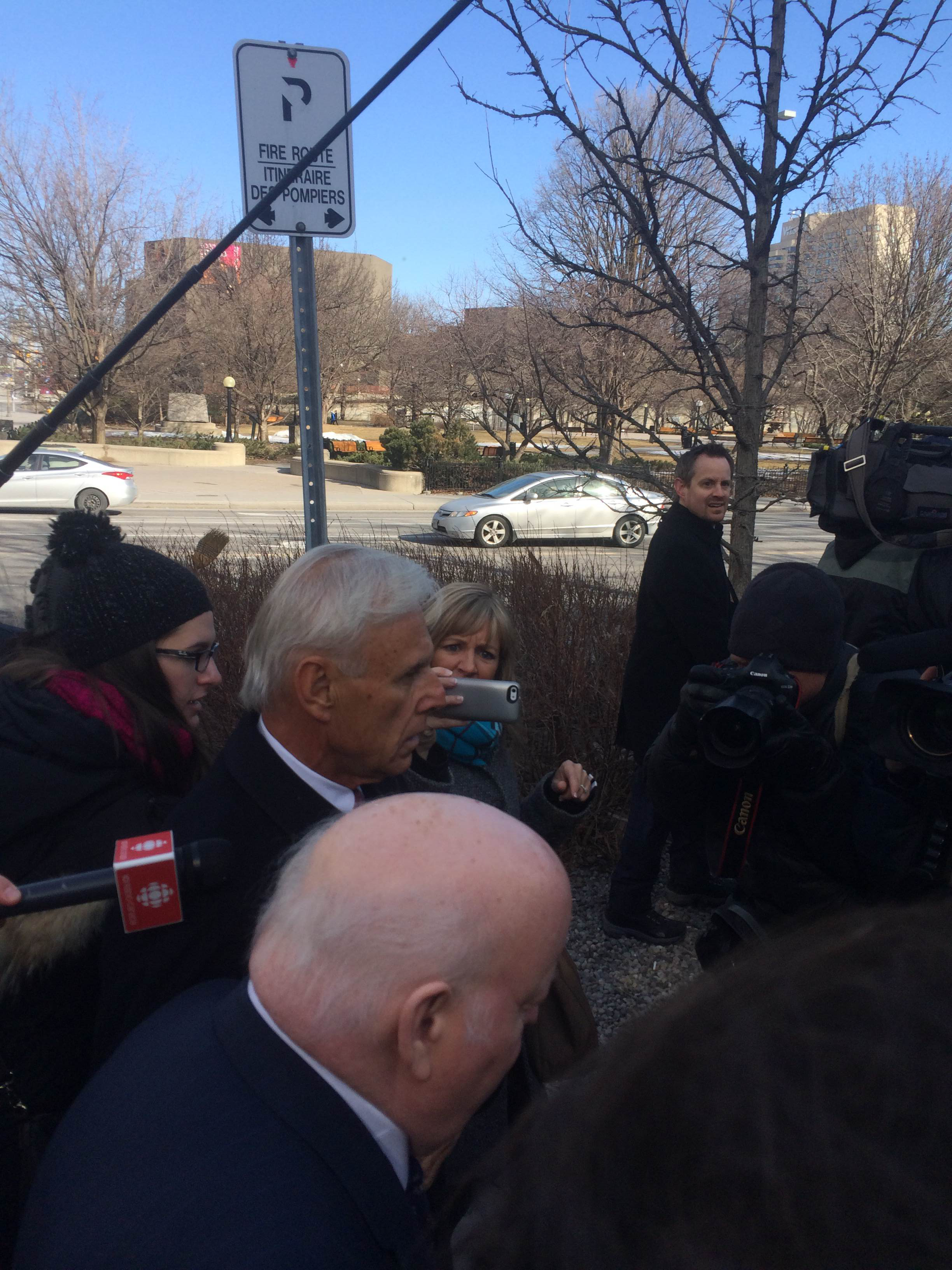 READ Brian Lilley's book CBC Exposed -- It's been called "the political book of the year":

You must be logged in to comment. Click here to log in.
Stu Gatzo commented 2015-04-08 12:26:37 -0400
Strange how it all of a sudden blew up after Duffy and Wallen were appointed to the senate. The media kept it on the front pages for months. It was like it was the end of the world and the sheeple licked it up.
Nobody went ofter Mac Harb and his “primary residence” claims (a residence which he never once visited) suggests this was a get-even ploy against these two journalists. Harb pilfered almost 1/4 million in residency claims. He then immediately retired to make sure he keep himself at the trough once word got out. Add to this his other “honourable” claims and Duffy looks like a choirboy.
Muta Ween commented 2015-04-08 11:32:13 -0400
The so called media’s detractors refer to them as the mainstream media (MSM). In the United States, Rush Limbaugh refers to them as the Drive-By media. But the media has become so biased and affiliated with the far left wing ideology that these descriptors no longer adequately describe the situation. In Canada, the media is an appendage of primarily the Liberal Party and to a lesser extent the NDP. But both parties represent viewpoints and ideology of socialism and government control. The media is totally biased . especially on a personal basis with PM Harper. Any story that they can put legs under (or contrive) that will damage the Conservative image , brand and policies. gets front billing , as we see in the circus around Duffy’s trial.So we have hypocrisy and double standards applied in radio, TV and newsprint. This is the case with Duffy. As sleazy as the man is, were he a liberal . there would hardly be a whimper. I think we need a totally new approach to dealing with the media and the lack of objectivity they display. It really is pernicious and anti-democratic.
Michael G. MacKay BA, '05 commented 2015-04-08 10:31:33 -0400
I believe that tis issue, should be allowed to proceed to its conclusion. By making that statement, I am saying that we as taxpayers, do not need a filthy three ring circus or a dog and pony show, that will only serve to obstruct justice If Senator Duffy is truly guilty of these charges that have been brought against him. then he should be charged and convicted, and his health issues need to be considered and supported so that his health situation does not get worse. However, if Mr. Duffy is completely innocent of said charges against him, he needs to be found not guilty and a public apology needs to be made from the chamber of the House of Commons.

Tje same goes for the other Senators who have charges against them.

Peter Netterville commented 2015-04-08 08:43:23 -0400
Mike Duffy is only the vehicle to get to Harper. The main stream media will only mention Duffy’s case in passing while heading straight for the PM’s throat. They will do everything they can in attempt to take down Harper. I do not have the words to express my disdain for the immoral display of the main stream media.
Marjorie Spacek commented 2015-04-08 08:26:20 -0400
The media swarm is disgraceful. Let’s see one camera and one microphone. Why doesn’t someone in authority protect people entering courthouses? Let us hope neither Mr. Duffy nor his lawyer will be injured in that melee. When the “Senate scandals” broke, the Telegraph Journal published the expenses of all New Brunswick senators, and by comparison, the expenses claimed by Senator Duffy were no greater than those of many of the other senators. Mr. Fife of CTV pointed out the remarkable presentation by the lead defence lawyer, Mr. Bain. Otherwise I will not watch the reporting—too much smirking and self-satisfaction on display. As for living through the past two Maritime winters, anyone with an alternative would indeed go elsewhere!
Frank Butty commented 2015-04-08 06:23:27 -0400
The media swarms in and asks the pressing question: “How do you feel today?”. That’s pretty funny.
Andre Gaudreault commented 2015-04-08 04:29:35 -0400
I can see how some people get excited, it is not everyday that you see a senator in court charged with offences. But some people go over the edge as it is usually the case with these things. I am sure Robert Fife had an orgasm on question period last week describing the week ahead, he could have not been more excited announcing the beginning of WW III.
Maurice Potvin commented 2015-04-07 23:30:39 -0400
I think it might just be human nature for all of us to get a little corrupted when there is no oversight and someone else is picking up the tab. Of course, some of us more than others. Let’s just wait and see what comes out in court.
Marc Elgin commented 2015-04-07 21:04:02 -0400
I love those “trial of the year/decade” comments from the mainstream media… how very selective… I remember Liberal senator Raymond Lavigne being convicted for fraud and going to jail, but not many other people remember that (not the same news coverage), not to mention Ontario Liberal Ben Levin and the child pornography charges and court case- how many reporters there?
I agree with some of the comments that the target is Stephen Harper- and the mainstream media are just licking their chops. It’s pathetic, but the real danger is the “low informed” voter, and they grow in numbers every day.
Michael Bergen commented 2015-04-07 20:26:27 -0400
Hear hear!
Peter Netterville commented 2015-04-07 19:34:53 -0400
Since Harper took office in Feb. 2006 I have observed that the main stream media, lead by the CBC, have slowly degraded their morals. Not that their morals have even been too high, esp. the CBC.

They are so desperate to get Harper out of office that they do not seem to realize anymore just how much they are violating not only the ethical standards of proper journalism but the standard decency and morality we all expect in our fellow Canadians.

They work against Canadians using their influence as the national broadcaster to push their left wing agenda directly manipulating people’s opinions to force their desired outcome on the election. Isn’t that at least borderline illegal? Proving it is the problem.

Belinda Cardoso commented 2015-04-07 17:40:56 -0400
They want Harper’s blood and they’re hoping to get it here. If they don’t, they’re going to base their reports on inuendo and outright lies, just enough negative connotations for the ‘low-informed’ voter. Why ? Good question – hasn’t anyone noticed how unreasonable it is ?
mike rose commented 2015-04-07 17:28:40 -0400
This is a story that will play out for a while and the press will milk everything from it seeing as Harper is the target.
Duffy is the defendant but Harper is the target.
Election time is nearing and the Libs are scraping the barrel to wrest control back from Harper. Funny how Trudeau is waterproof to scandals and gaffs isn’t it? The Liberal kid can do no wrong as far as most of the press are concerned and they conspire to keep him in a shiny light.
This will be intresting or travesty or intresting travisty.
Playball. Watch the curves.

al rose commented 2015-04-07 17:15:22 -0400
BERT i thought everyone knew the answer to your Question.
The media has a love in with Trudeau, they will not show him in a negative light, only Sun news did that and now the Rebel
So the answer is,, it is Trudeau they want to replace the Harper Government

Bert Cabling commented 2015-04-07 16:43:14 -0400
Why does the media wanted to bring down the Harper government? Why? And who do they wanted to put in place? Just for thoughts….
Yisroel Mendelson commented 2015-04-07 16:28:19 -0400
appreciate the final facts and the final point to perspective! needed it
mark macfadzene commented 2015-04-07 15:55:26 -0400
it worked to bring Martin down, now they are going to give it all to do the same for Harper. At least I can sit back and watch spring ball…what there is a trial? I don’t even watch …
Sanda Gwynne commented 2015-04-07 15:33:17 -0400
This is insane! Were the hounds chomping at the Liberal senators heels when they were in court? Were they flooding the courtroom to capacity when ex-Liberal Deputy Minister of Education Benjamin Levin admitted to five counts of child pornography charges?
No. They. Were. Not.
So much for integrity in journalism with main stream media, spoon feeding the sheeple their biased partisan views.
Makes me want to throw up all over them.

Then sue them into insolvency!