Short video by a Muslim activist encouraging non-Canadians to join the Ontario PC party, in order to support a Muslim candidate, and for that reason alone.

There is more about the candidate here.

One choice quote about the woman who made the video above:

Nadeem Shaikh is also supported by Farina Siddiqui, who is a Muslim community activist and resident of Mississauga.  She has publicly criticized Patrick Brown in the past.  Furthermore, she posted the attached post on her Facebook page and the “Toronto, Ontario Muslims” Facebook page, encouraging Muslim residents in Erin-Mills to join the PC Party of Ontario to support Nadeem Shaikh because he is a Muslim. In fact, she goes as far as to say, “Am I supporting any particular party here? absolutely not.  I am supporting Nadeem Shaikh as our Muslim brother”.

A screen capture of her Facebook page shows the usual use of "progressive" language to support what may be highly illiberal agendas. 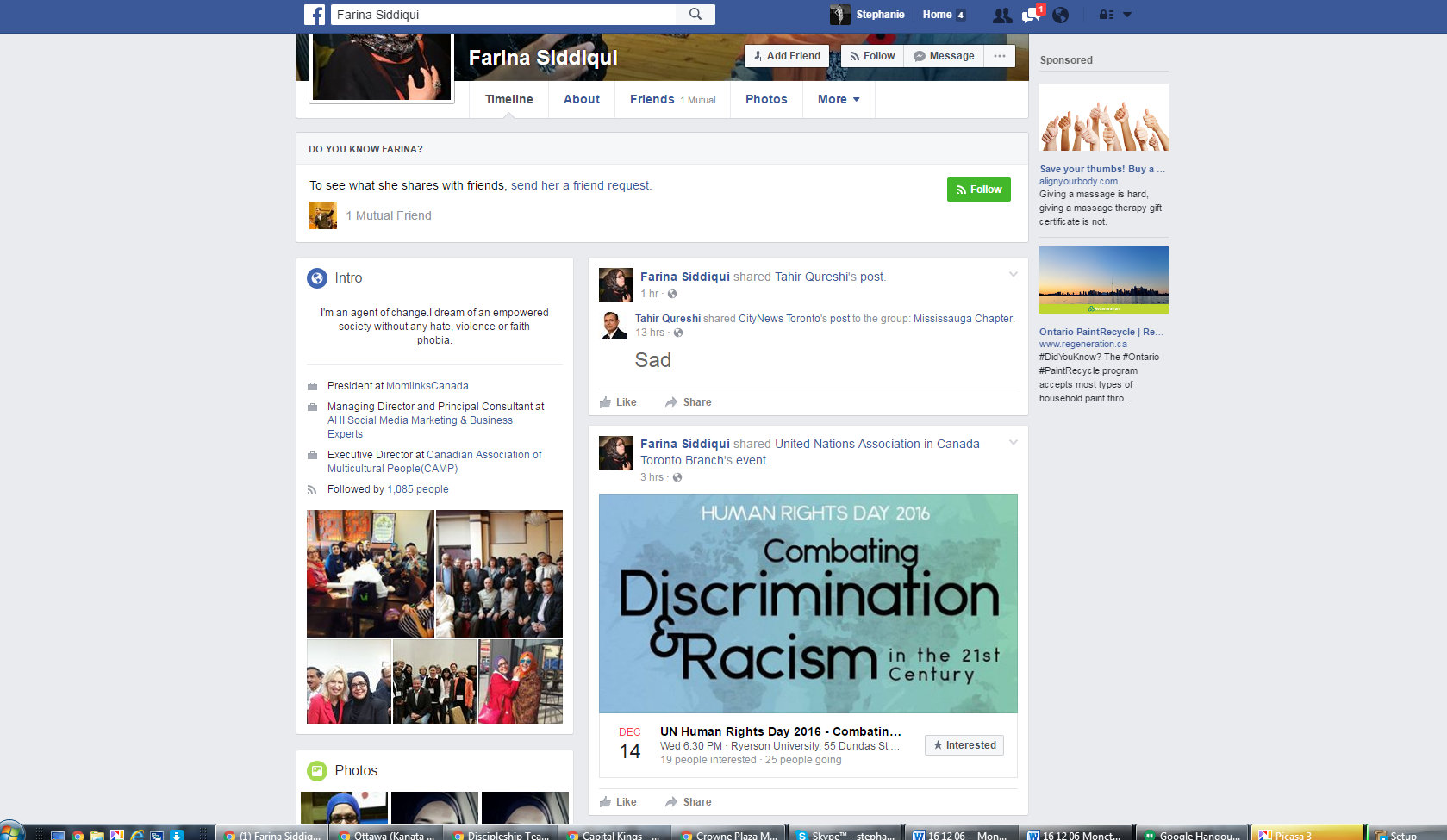 You must be logged in to comment. Click here to log in.
David White commented 2016-12-07 18:37:18 -0500
Thanks Karan Singh for the link. Any person with an IQ of 1 should be able to see what a clueless imbecile the boy with multiple dna strains is all about. Because Maggie the sperm depository had such a blend going on the night of conception, we ended up with the bumbling multi cultural , muti gendered pos, Justine the stupid.(A little Mick, a little Pierre, a little Fidel, and I,m quite sure a lot of “other” mix was there as well. The stammering tirade we are exposed to in Karan’s link is proof that Baby is air headed fluff. Butts and the Saudi puppeteers must be in utter glee knowing they have the controls on OUR CLUELESS PRIME MINISTER. When the sharia takes over, I pray Baby is the first victim. His utter stupidity transcends stupidity.
Mette Reed commented 2016-12-06 23:32:05 -0500
Muslims having any role in government or in any role of authority will eventually bring Sharia. In fact, they are called by their religion to bring Sharia to the land. Very, very dangerous! Look it up! They are required by their religion to bring it.
Liza Faucher commented 2016-12-06 20:31:20 -0500
Karan Singh, thanks for that link. I couldn’t watch the vids because watching and listening to our not so beloved PM speak, makes my skin crawl. I really appreciated being able to read the snippets of script of the interviews . It was worth the read.

The kid is a buffoon who can barely string words together to form a sentence. He is so delusional about his multiculturalism that he makes himself sound like an idiot. The rest of the world thinks you are an idiot Justin!! You should check out the multitude of comments below the interview. Nobody agrees with him nobody. I don’t think all that many who started out supporting him support him anymore. An awful lot of people are going, ‘say what?’

I do think his days are numbered. But he has done so much damage in such a short time. I wish we could get him gone. I didn’t vote for the psychopath, but I never would have thought he was this dangerous. A really twisted mind.
I agree Roger we need to slam the gates shut. I would also like to keep Islam out of government.
Roger McAvoy commented 2016-12-06 19:42:39 -0500
I’m telling you people we better shut that fuking door, if it is opened all the way we will not recognize our Country in 5 – 8 years.

The best trick the devil ever did was convince people he didn’t exist, well guess who’s coming to dinner.
Glenn Craig commented 2016-12-06 19:28:13 -0500
Honestly I am of two minds on this….I am against sharia creep…but ANY opposition to Kathleen Wynn is a good thing…and this particular woman’s activism may be about the school curriculum…can’t fault her for that. And even in Israel moslems are not politically disenfranchised.
Elton Braun commented 2016-12-06 18:52:14 -0500
Separation of mosque and state? …creep creep creep…
Keith Barnes commented 2016-12-06 18:50:27 -0500
Muslims, who on the whole, are incompatible with civilization, should not be permitted to join the PCs.
Liberal or NDP are OK because they too are incompatible with civilization.
Rae Fraser commented 2016-12-06 18:19:18 -0500
And guess what ?
Leviticus 2013 commented 2016-12-06 18:14:11 -0500
Glen Craig… I’m looking forward to a fresh start in the new year.
Glenn Craig commented 2016-12-06 17:33:02 -0500
At one point in time feminists infiltrated the policy commitees of ALL parties thereby eliminating democratic choice. The Harper tories cought on to this and to the rising populist opposition to it….which is why we had a decade of Harper….the women in the conservative caucus were not “collegial” with status of womyn.

I did some rock turning down to specific polling districts in the US after the Trump victory…Dearborne Michigan is now a moslem enclave. But the voting patterns might surprise you. Generally moslems don’t turn out to vote except in municipal elections for things like school boards. They do not want their Madrasas comandeered by alphabet soup gender theorists…can’t blame them for that….in the primaries those who got involved enough to vote tended to support Bernie Sanders…even though he is Jewish…I have no idea why.

Surprisingly the swing vote went to Trump…I can only speculate that it might be because Dearborne is a Shiite community and they did not like the idea of letting in large numbers of their avowed enemies and/or support of the police and law enforcement makes them feel a little more secure in crime ridden Michigan…not to mention bringing back jobs to the rust belt…sort of belies the leftist narrative.

So Victor…I know I should do my own homework….what can you tell me about the moslem community of Mississauga ?
Karan Singh commented 2016-12-06 17:32:40 -0500
Blatant ‘INFILTRATION’.
Couple of days ago POS turdo has asked muslims to “join conservative party to influence their policies & confront anti-Muslim sentiments.”
Link: http://en.cijnews.com/?p=67199
Leviticus 2013 commented 2016-12-06 17:20:35 -0500
WCC for western separation..
They can have Ontario and in fact the Muslims and the rest of the non-Canadians can have Quebec and Atlantic provinces and Maritimes as well..
All the above voted liberal to allow this to happen and that we have liberal infiltration into every party at every level… This is not going to end well with mainstream Canadians are minorities in their own country.
Liza Faucher commented 2016-12-06 17:13:37 -0500
Non citizens can join any political party? I don’t want non citizens having anything to do with our political system, even on such an elementary level. This sounds like infiltration of liberals into the conservative party. Nadeem Shaikh and certainly this activist don’t sound like true conservatives to me or would hold any loyalty to the party. God knows Brown is already a disappointment but I would never vote for anyone who identified as Muslim or had any connections with any Muslim organization as Nadeem Shaikh seems to have. I don’t welcome or accept Islam and most certainly do not want to see it intertwined in our government. As we allow more and more Muslims into our country more and more are going to be elected into government positions. This is going to pose big problems as the number of Muslim MP’s in Parliament rise.
Denounce Islam, welcome and I will consider your vote. If you identify as Muslim and live with Islamic values and beliefs I can’t trust you. I do not recognise Islam as a religion or anyone who lives under it’s ideology. This makes me very uncomfortable.
Lloyd Nolan commented 2016-12-06 17:02:12 -0500
Trinky — sneaky tricky
Catherine Rochford commented 2016-12-06 16:11:26 -0500
Trouble maker. This muslim and the muslim she supports can’t do this according to conservative policy. They all need to be shut down immediately and thrown into jail as they only want to make Canada another Islamic state which is treason. Let them join the green party or start their own islamic shit disturber party.
Drew Wakariuk commented 2016-12-06 16:08:47 -0500
Always get a laugh when hate filled racists say they are fighting racism and intolerance.