Now this will make your day. A reporter at The Varsity, University of Toronto's campus paper contacted Ezra Levant about Lauren Southern “disrespecting” the safe space of the 'trans public'. 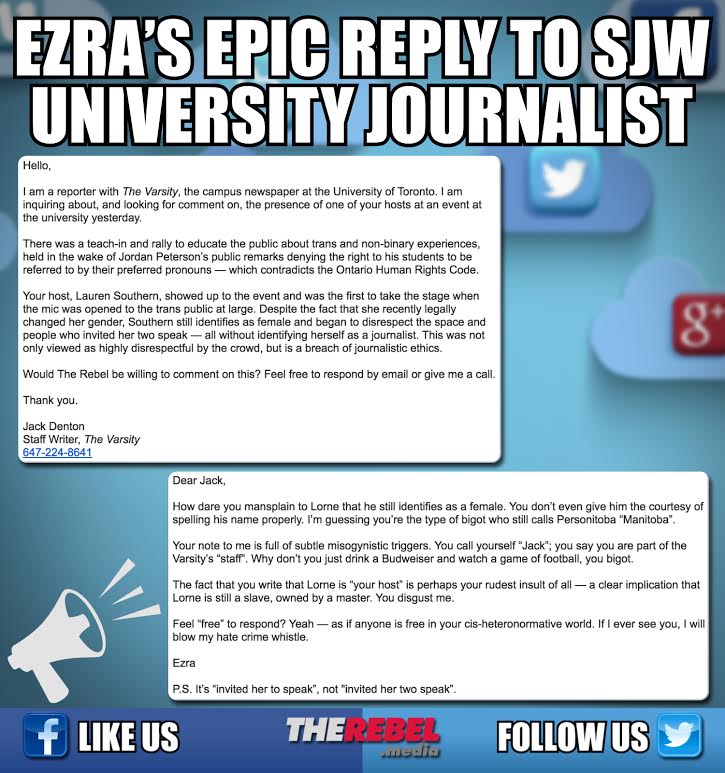 I am a reporter with The Varsity, the campus newspaper at the University of Toronto. I am inquiring about, and looking for comment on, the presence of one of your hosts at an event at the university yesterday.

There was a teach-in and rally to educate the public about trans and non-binary experiences, held in the wake of Jordan Peterson’s public remarks denying the right to his students to be referred to by their preferred pronouns — which contradicts the Ontario Human Rights Code.

Your host, Lauren Southern, showed up to the event and was the first to take the stage when the mic was opened to the trans public at large. Despite the fact that she recently legally changed her gender, Southern still identifies as female and began to disrespect the space and people who invited her two speak — all without identifying herself as a journalist. This was not only viewed as highly disrespectful by the crowd, but is a breach of journalistic ethics.

Would The Rebel be willing to comment on this? Feel free to respond by email or give me a call.

How dare you mansplain to Lorne that he still identifies as a female. You don’t even give him the courtesy of spelling his name properly. I’m guessing you’re the type of bigot who still calls Personitoba “Manitoba”.

Your note to me is full of subtle misogynistic triggers. You call yourself “Jack”; you say you are part of the Varsity’s “staff”. Why don’t you just drink a Budweiser and watch a game of football, you bigot.

The fact that you write that Lorne is “your host” is perhaps your rudest insult of all — a clear implication that Lorne is still a slave, owned by a master. You disgust me.

Feel “free” to respond? Yeah — as if anyone is free in your cis-heteronormative world. If I ever see you, I will blow my hate crime whistle.

You must be logged in to comment. Click here to log in.
Leviticus 2013 commented 2016-10-07 16:00:50 -0400
Universities used to be a place to seek higher knowledge and education, now they are a place to seek a higher level of indoctrination at taxpayer expense.
Everything is so far gone it cannot be fixed ever…!! We must wait until the powers that be push the reset button themselves.
Anything but a man for a woman and a woman for man is insane and any of you SJW’s out there only need to look at our social tapestry unwinding at an alarming rate because people are so confused now that men are sleeping with men and women are sleeping with women, women are trying desperately to grow male genitalia and men are removing their male genitalia in an attempt however lost in cause to become a woman..
Homosexuality is a form of insanity and should not be justified but be treated a sickness… And we have become so desensitized by the idea of a penis fecal on it matter is normal, a man’s anus is not a sexual organ and a woman can never be with another woman as a man would be with a woman. If even they believe that this is freedom of choice their cognitive powers have become diminished and they no longer think clearly as the result of trauma or or have been confused by indoctrination. If anyone has ever seen what transpires at a sodomite parade one can observe the insanity first hand, I personally cannot stand watching such things when men are dressed up half naked and like cartoon characters shame on them.!
I found them much easier to tolerate when they were in the closet and not in my face demanding the same rights in same-sex marriage as one would find in holy matrimony between a man and a woman.
This has all gone too far but it cannot be stopped and it must go further to issue in the godlless NWO followed by the prophesized second coming and for all of you that wished to make fun of that obviously you have never read the Bible so you could never understand that everything that is happening right now is already been prophesies in coming true.
Everybody that doesn’t like what they see right now with the way everything in society is unfolding and unraveling you have an unbridled view and front row seat to witness man’s law over his fellow man.. Back in the day when we were a Christian nation under God’s law we were not only prosperous but we could leave our doors unlocked leave, keys in our vehicles and our women and children could walk the streets safely at night time.. Even the police force at that time was different as they were helpful courteous and actually served society..
Now they just serve themselves. Now they are quickly becoming an enemy of the people distancing themselves from us and aligning themselves with the elitists as a private protection for us for them and if anybody else has noticed their new motto is not to "serve and protec it is to
“serve and collect.”

“Anti-intellectualism has been a constant thread winding its way through our political and cultural life, nurtured by the false notion that democracy means that ’my ignorance is just as good as your knowledge.” — Isaac Asimov
mark macfadzene commented 2016-10-07 12:38:43 -0400
you could not of put that in better words … I think Jack just got a taste of his own medicine, yet, he probably still doesn’t know he is sick…
John Landry commented 2016-10-06 22:40:13 -0400
“Two speak” is not a typo, but an example of neurological damage which is common among millennials.
Jan G commented 2016-10-06 22:24:34 -0400
I bet it,they,s/he,whatever Mx. Denton’s gender de jour is, wasn’t expecting that response from you Ezra!!!

" Why don’t you just drink a Budweiser and watch a game of football, you bigot." :-)