"Revolution is like Saturn, it devours its own children." -- various revolting Frenchmen, 1789

~ ITEM: The Sp!ked UK 'Down With Campus Censorship Campaign'-- lots of resources

~ THERE'S A VERY MESSY new culture war within the ruins of what used to be called the liberal left-- between the cry-bully safespace-kids, and the older generation of progressives. Grab your popcorn!

The latest tactic for the younger generation of radicals is something called 'No Platforming'-- or, raising a stink about someone, no matter how, to get them banned from a public event, discussion panel, or convention, and reported to various authorities. 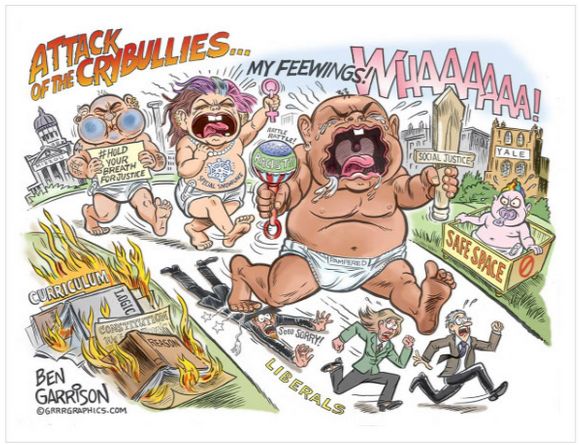 (Evil banned comic via.. and buy the t-shirt)

In some cases, aging radicals dislike the fact that their uppance has come, that the radical forces they helped unleash are now biting them in the hindquarters. Hilarity ensues.

Julie Bindel is one such cheerful sower of dragon's teeth.

She has actually proposed "concentration camps for all men, a group she doesn’t actually even regard as human." Further, as the headline below proves, she doesn't even understand what the no-platforming monster is all about in 2016. 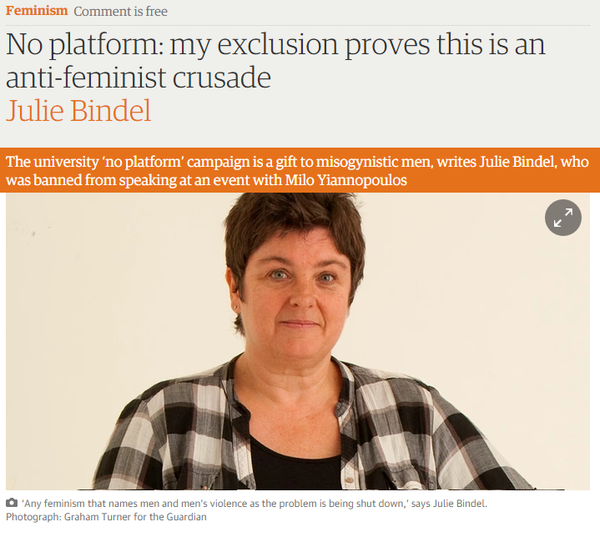 No-platforming was originally an anti-fascist tactic, but has mutated into a form of campus censorship, and silencing of free speech -- now against many of their own ideological allies and elders, no less, as well as their peers, professors, and other victims. And so it spreads like an anti-intellectual fungal infection into society from there. 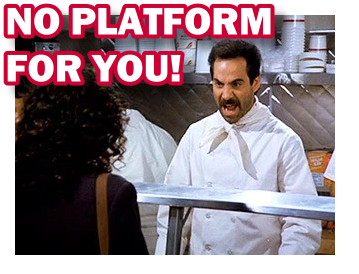 Yes, this is actually a thing, and -- ironically and sadly -- it's arising in England, the home of free speech, parliamentary democracy, and hard-won liberty under law. Magna Carta?

Didn't learn about that in my Afro-Concentric trans-lesbian basket-weaving course, so it can't be all that important, can it?

"If you're upset or offended, tough! That's what universities are for." 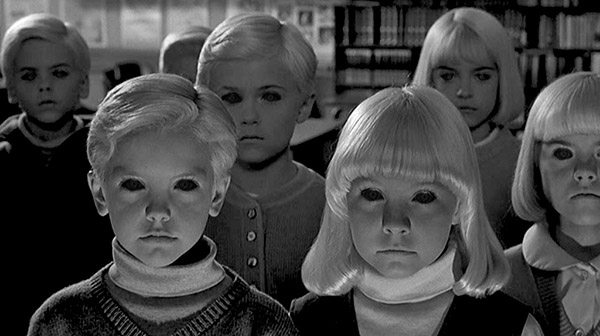 We've created a noisy minority within the current generation of university students. They literally believe that offending anybody in any way is utterly unacceptable -- unless you're off-message, non-progressive, or one of those icky oppressive Jewishes.

No remorse, no regret, no mercy, no logic, no care for those whom they silence or crush, victory at any cost, human or otherwise. They don't just gaze into Nietzsche's abyss, they paddle around in it: "Whoever fights monsters should see to it that in the process he does not become a monster", warned crazy Friedrich.

And it's spread to universities near you. In one burst of irony-free activism, a student called for the merely potentially offensive London School of Economics free-speech society to be banned-- amounting to freedom from speech. Can't be too careful.

"Just ENJOY the feeling. There is no need to rationalise it.

Such political correctness has been around for decades, and petty campus bullies and idiots and petty tyrants are nothing new -- I used to encounter them all the time.

Fast-forward to 2016, and now the social media megaphone has gotten them more attention and money, made them more bold, and enforced their cry-bully outrage and ideology. And they are much more busy & dangerous. 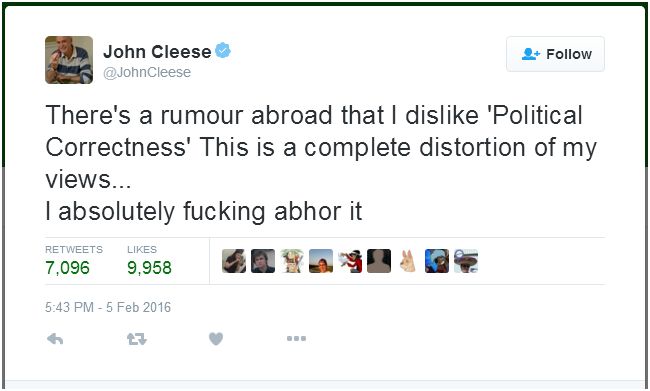 "If you start to say 'We mustn't, we mustn't criticize or offend them', then humor is gone. With humor goes a sense of proportion. And then as far as I'm concerned you're living in 1984...."

As part of our fact-based strategy to push-back against the campus silencers, we must also use humour, mockery, strident criticism and an utter refusal to apologize or seek approval from the cry-bully social justice warrior mob.

Take no prisoners -– pray for them, love them, speak to them, stand up to them.. and laugh at them.

With a sense of rebellious and fun-living mischief, humour can keep us sane, humble, thick-skinned, and prevents our becoming monsters-– those boring, unsmiling, grumbling, prowling, bellowing & howling perpetually offended zombies for The Cause.