Evidence is mounting that the anti-Trump protests are in fact, paid organized George Soros sponsored events and not grass roots whatsoever. Below is footage of some of the rioting with a few links and images suggesting the real "root cause" of them.

Here is an advert for people to participate: 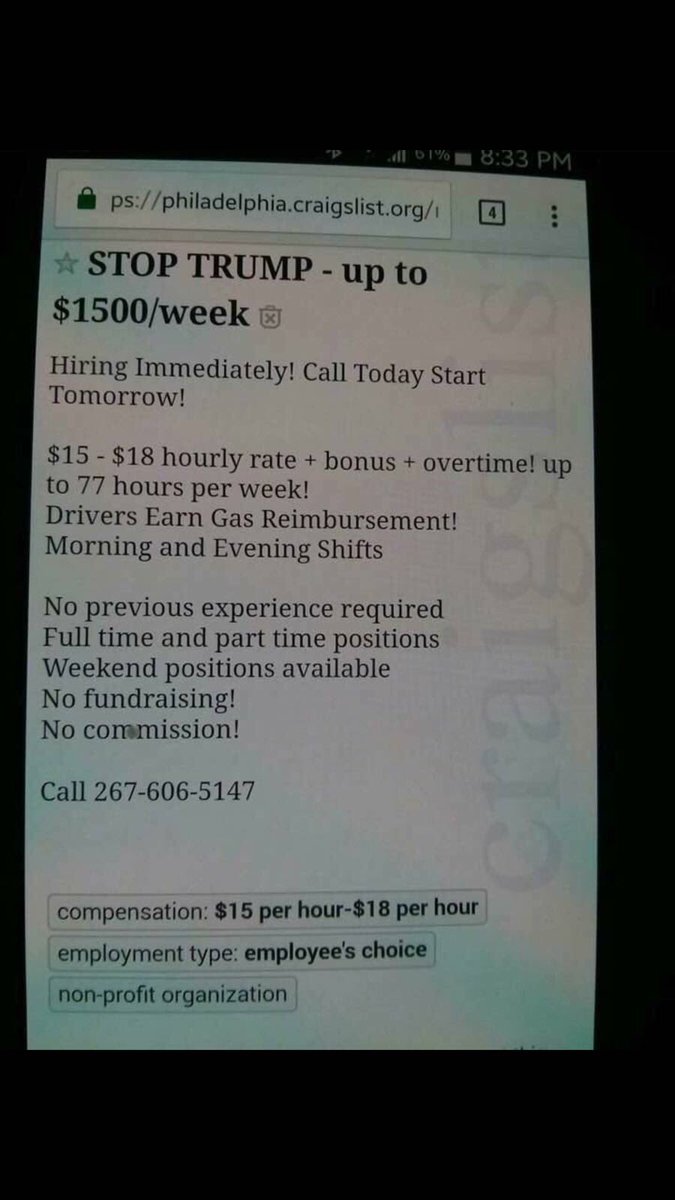 The following video is alleged to be blocks and blocks of busses used for moving huge numbers of protestors into Portland for the violent riots against President Elect Trump.

Meanwhile, on the tenth, some "never Trump" protesters marched right into the middle of a US Marines Pub crawl. Things didn't go well for them after that.

You must be logged in to comment. Click here to log in.
Leviticus 2013 commented 2016-11-14 14:48:44 -0500
What everybody is witnessing now is contingency plan B..!! This is the fuel that Obama needs to declare martial law and declare his third term.
When you have 94 million people out of work and they can make $15-$18 an hour protesting Donald Trump this is not going to go away anytime soon.
I never really believed that they would let him sit the White House if he won.!
Catherine Rochford commented 2016-11-14 14:43:00 -0500
Get it through your heads violent and paid protestors/rioters, it’s over. The corrupt insane witch Clinton is not going to be the president and America is not going to be under sharia law. Law and order will be restored. You’re all going to prison and/or getting deported for inciting violence and other charges. Stop trying to turn America into a middle east shit hole, which is exactly what all of this looks like.
Just imagine if Clinton would have been elected, they’d have had the violent criminal a-hole government like these rioters ruling for another 4 years. Just like the government Canada is under right now. And also this is the type of garbage people who have been governing America for the past 8 years! Insane.
Sherri April commented 2016-11-14 13:57:33 -0500
Fill up the FEMA camps with these lawbreakers and pray soros gets a bullet to his demonic little head
Stephen Eisenberg commented 2016-11-14 12:20:44 -0500
I wonder how the main stream media would react if protesters formed in front of all five Clinton mansions and Chelsea’s $10,000,000 apartment peacefully calling out “Lock Then Up”. Maybe a few demonstrations (peaceful) also calling out “Lock Then Up”. Maybe even calling out “Investigate Obama”. Would the media reaction still be so positive for the demonstrations? Shocked, I believe.

As William F. Buckley Jr. said: “Liberals claim to want to give a hearing to other views, but then are shocked and offended to discover that there are other views.” We see how true this is when they didn’t get their way. A democratic election and suddenly comparisons to Hitler spring up, name calling, violence, foot stamping and holding their breath until they turn blue, all because the election did not go their way. Not unexpectedly, Obama, Biden and the Clintons are silent.

Its the intolerance and arrogance of the left.
Dan Mancuso commented 2016-11-14 11:51:24 -0500
As I was reading the article I began musing about what the West would be like if all of a sudden all liberal/progressive/lefties just disappeared, like in Satan’s version of the rapture…POOF.
Just think about that for a minute…
Kevin Emsley commented 2016-11-14 11:51:07 -0500
It looks like non of them have jobs , they all look 20 to 25 with no ambition in life other then they were counting on Hillarys hind tit for all the hand me outs . Kinda like what is happening in CANADA .
Allan Peterson commented 2016-11-14 09:42:37 -0500
And, like the BLM riots, Hillary and Barak are silent. Why would that be? Hmm…
Roger McAvoy commented 2016-11-14 08:34:38 -0500
You think there is anarchy now, this is just a piss ant protest, there are close to half a billion people in the US, a few thousand paid protesters will not change anything.

Now if the lefties try to circumvent the election results, you will see anarchy on a scale that the West has never seen before and people will be in a state of Civil War brought on by left, purposely I might add.
bill smith commented 2016-11-14 07:18:03 -0500
The phone number in the screen shot of the Craig’s List employment ad links to “Community Outreach Group LLC” a “Non partisan Political Organization” funded by PLANNED PARENTHOOD
Dr. Genius commented 2016-11-14 06:07:12 -0500
How has international terrorist George Soros managed to stay out of prison? Perhaps Trump will be willing to call a spade a spade, since he’s not on George’s payroll.
Gray Molly commented 2016-11-14 04:49:07 -0500
It seems to me that if there is a process of hiring individuals to protest in a way both criminally destructive and disruptive to critical routes used for emergency services that should put the party involved in a position of criminality as well, and that party should shoulder primary criminal responsibility. I wonder if they will bother to investigate? Unlikely since no one seems interested in prosecuting any Leftist activity whether it’s Hillary’s corruption or organized anti-Trump violence.
We’ll find out soon how deep the disease has progressed when the Electoral College votes; the law is there to allow it, even though there is no real precedent for it, but every vote could be changed to allow anyone the powers that be wish to install as President. I wonder if the Soros’ of the world would stoop so low as to blatantly circumvent the will of the American voters and use a loophole like that to get their preferred President installed oops ‘elected’?
Leviticus 2013 commented 2016-11-14 02:20:59 -0500
What everybody is witnessing now is contingency plan B..!! This is the fuel that Obama needs to declare martial law and declare his third term.
When you have 94 million people out of work and they can make $15-$18 an hour protesting Donald Trump this is not going to go away anytime soon.
I never really believed that they would let him sit the White House if he won.!
Hyacinth commented 2016-11-14 01:54:51 -0500
Paid rioters. Not surprising. We have that in Canada too just on a much smaller scale than the States.

http://news.nationalpost.com/news/canada/rcmp-tracked-89-indigenous-activists-considered-threats-for-participating-in-protests
“Using the information it received and data collected from social media, the Mounties identified 313 activists — attendees of protests on issues ranging from natural resource development to missing and murdered indigenous women — who potentially posed a “criminal threat to Aboriginal public order events.””