[SCROLL down for UPDATES] A few questions come to mind after seeing this photo of Armand Swampy, husband of NDP candidate Katherine Swampy: 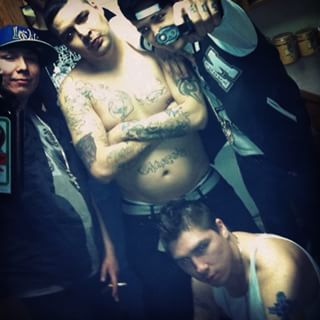 Is that a real handgun?

If real, is the person aiming the gun at the camera licensed to own a handgun?

If real, what does the law state about casually pointing a handgun like this?

Regardless if it’s real, why would someone running to be a Canadian law-maker think posing like this was acceptable? 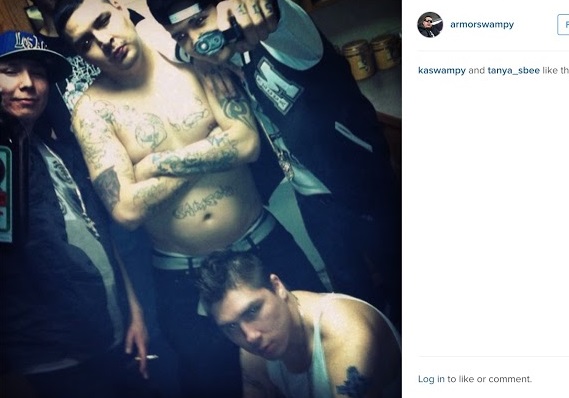 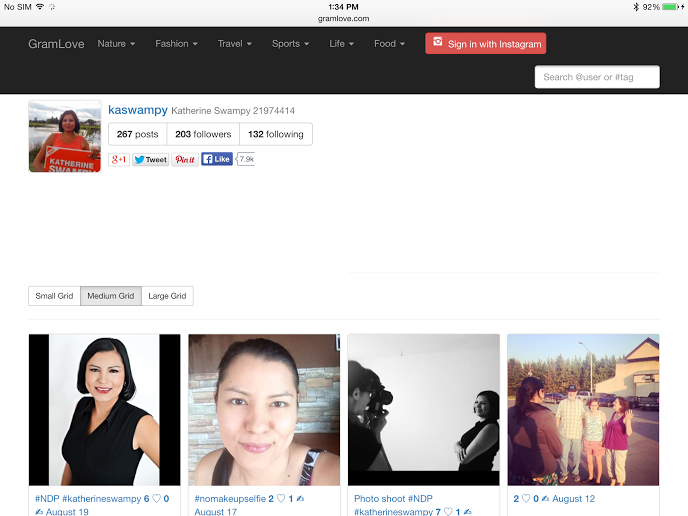 These are some questions Swampy and the NDP must answer – with the assistance of the RCMP. 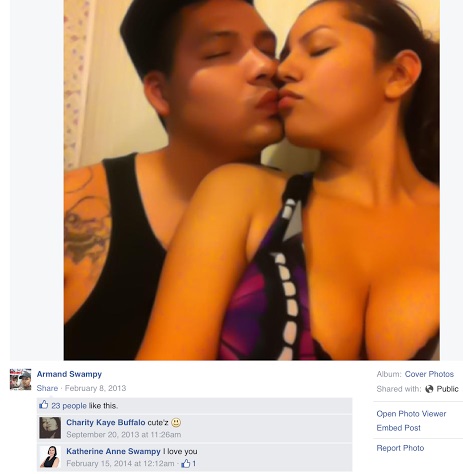 Update: This looks to be a photo of Swampy’s husband posing with a handgun. Notice the title “Armand” and it being posted from an album titled “Katherine S’s Photos”:

Was it Katherine Swampy who took the picture?

UPDATE: I have confirmation from a provincial jail guard that the tattoo on Armand Swampy’s stomach is gang affiliated and is called a “Family tattoo”:

You must be logged in to comment. Click here to log in.
Bernadette N Rob Fisher commented 2015-09-17 11:00:09 -0400
You missed the screen shot of her thretening someone publicly. Or the glorious pic of “Armand” using a gas mask as a bong! I dont know how any of you can defend this woman. She is not fit for public office and should be removed! BUT, the NDP ( party of unaccountability) think its just fine!
Terry Rudden commented 2015-09-14 07:54:52 -0400
So to be clear: being married to a guy who once posed in a photo next to guy who brandished a fake gun under undefined circumstances (Hallowe’en? Costume Party?) means someone is an unfit candidate?
I’ve got a picture of me in a cowboy outfit pointing my cap pistol at my dad, who’s taking the picture. Goodbye, political career.
Give your heads a shake, kids.

Glenn Craig commented 2015-09-13 22:42:51 -0400
Bill. I have to agree….I am a certifiable “gun nut” but you do not point a firearm nor anything that could reasonably be mistaken for one at anybody…nor at anybody and nobody in particular in a photo posted on social media….it is the ultimate expression in rudeness at the very least ….and a credible death threat in most cases.
Bill Elder commented 2015-09-13 18:16:26 -0400
For what it’s worth the handgun is a replica – most likely airsoft or some similar faux pistola – the muzzle is obviously blocked making firing a live round impossible – regardless of its bona fides it makes no difference to the firearms section of the criminal code as replicas are considered to be “firearms” if brandished like one – and subject to all the firearms infractions which goes with this type of illegal carless firearms handling. I’m aware of at least 2 people who RCMP busted for posting similar photos on SM.

As for gangsta connections , I can see how criminals would back the NDP because they share common interests in disarming the victims of crime. The other telling facet of this little background revelation validates my suspicions that the federal NDP candidate roster shows the party is not serious-minded and ill prepared to govern.
Terry Rudden commented 2015-09-13 13:50:52 -0400
You’re not a very bright fellow, are you, Vlad?
Sally Robson commented 2015-09-13 13:38:46 -0400
Disgusting trash like many other in that party.
Vlad Johnson commented 2015-09-13 12:00:26 -0400
@terryrudden – your support of the nazi-pig party of Canada NDP is appreciated. Keep clicking dumb ass – Ezra appreciates your revenue contributions.

As are your comments.
Scott Carpenter commented 2015-09-11 19:15:18 -0400
Terry – its all mental recreation/retardation. :-) That’s what the net is for… you wouldn’t be here if you weren’t enjoying it just a little bit. At the end of the day I like to remember that the neocon dumb asses and nancy panzie lefties at the other end of the circuits are just people like me that I’d probably have a drink with if this were real life (some of my best friends are liberals you know :-0 – as long as they’re buying of course…)

She married a gangster and she knew it. Would you do the same? Are you of that low and questionable character? Do you promote that kind of character politically? You can’t wiggle out of this one by saying “its not her its the husband”. They’re a team buddy boy – one is a reflection of the other. She has no place in the political system – she should be canned.
Jamie MacMaster commented 2015-09-11 16:49:38 -0400
“Jamie: you don’t make a distinction the actions of a candidate and the actions ascribed to their spouse?”
You been reading that invisible ink between my lines again, TERRY?
Glenn Craig commented 2015-09-11 15:52:25 -0400
You are right Terry…after all the late spouse of the NDP candidate for Spadina Fort York was a found in in a bordello while still a sitting member…..leader of the NDP in fact.

If it ain’t a Tory it ain’t a story.
Terry Rudden commented 2015-09-11 14:59:55 -0400
Jamie: you don’t make a distinction the actions of a candidate and the actions ascribed to their spouse? What about actions ascribed to their kids? Grandkids?
Jamie MacMaster commented 2015-09-11 13:01:15 -0400
“…I think there’s a distinction to be made between this little acid-dipped turd of pseudo-journalism by Dean and the other “gotcha” moments this week…”
Whatever, TERRY RUDDEN. We all know you’d be saying the same thing if Ms. Swampy was a Conservative candidate.
Brent McFadden commented 2015-09-11 11:32:18 -0400
Freedom of expression for all must stand! Freedom of speech must stand! Political gangsters/gangs rule with impunity, Ezra should celebrate this as opposed to it!
John Ross commented 2015-09-11 11:16:17 -0400
This twit is obviously a mental midget. I’d suggest Ms. Swampy makes poor choices….but then that would be the epitome of redundancy….she’s a Dipper!
Robert Reynolds commented 2015-09-11 10:21:29 -0400
I thought this party’s name stood for no damb pukes…just another act of hypocrisy on the part of a party that shouldn’t exist..wouldn’t it be nice if the liberals merged, so we could marginalise the nut jobs and get an actual alternative to the conservatives…so we have more than one choice…election after election after election. ..
Terry Rudden commented 2015-09-11 09:45:42 -0400
Jamie, I think there’s a distinction to be made between this little acid-dipped turd of pseudo-journalism by Dean and the other “gotcha” moments this week.
The guy caught on camera pissing into a coffee cup, then dumping in the sink, was a CANDIDATE. (Why the coffee cup, incidentally? Why not piss directly into the sink?)
The guy caught playing Ninja and beating up on the woman vandalizing his poster was a CANDIDATE.
The guy who stepped down after his anti-Israel tweets came to light was a CANDIDATE.
Ron Voss commented 2015-09-11 08:58:20 -0400
TERRY RUDDEN’s comments, as usual with his leftist friends that post here, are so revealing of the twisted irrational, mind of a leftist. According to Terry, what was done is off limits. Why? Because, in Terry’s mind, it constitutes picking on “Umm…attractive Aboriginal women”. Presumably then if it involved an attractive non-Aboriginal woman, it would be okay, especially if she was a Conservative candidate. Or if she was unattractive would it be okay? In Terry’s mind, presumably he doesn’t regard the photos as “a little creepy”, but exposing them is! “But, hey…to each his own fetish, I guess.”
Michael Crowell commented 2015-09-11 08:48:58 -0400
Disgusting photos. Here is her NDP website to voice your displeasure.
http://katherineswampy.ndp.ca/contact
SolidFPlus commented 2015-09-11 08:25:21 -0400
Nice catch, Jamie. Imagine the outrage if daddy had posed proudly with said drawing of a gun! Oh my!
Jamie MacMaster commented 2015-09-11 08:13:09 -0400
Well, it could be just some kids clowning around.
But in the meantime, we can rest happy and content in the knowledge that our diligent media will determine whether Ms. Swampy’s hubby is a gang member/affiliate and whether the gun was real.
Right?
Feel better?
No, eh?
SolidFPlus commented 2015-09-11 07:57:02 -0400
From her Linkedin profile:
“I want my community; Hobbema, to be lifted of all the colonial weight, and to become a striving nation, both economically and through sovereignty…”

Also, her NDP bio gives the impression she was a trusted federal employee, a former tax officer at CRA. She worked there “for the summer”.
Michael Crowell commented 2015-09-11 07:49:34 -0400
If she was a Conservative this would be national news for a week. Liberals and NDP always get a free pass from our very unobjective media.
Jamie MacMaster commented 2015-09-11 07:38:49 -0400
Well, a few photos of Daddy with a gun wouldn’t be as serious as, oh let’s say… their daughter drawing pictures of Daddy with a gun, right?
Vlad Johnson commented 2015-09-11 06:56:30 -0400
Yep – just like the nazi-pigs want it – disarm the public and let the criminals operate with illegal handguns.

And then there’s the stupid fkg Canadians that think the big fat NDP goobermint will save them, only to show up at their doorsteps and rape, steal and murder. Stupid naive Canadians.

PIG MULCAIR SUPPORTS THIS TERRORISM IN OUR OWN HOMES. ROT IN HELL MULCAIR.
Terry Rudden commented 2015-09-11 06:44:16 -0400
The tattoo, Jay. Don’t forget the tattoo. I call on all parties to post images of the midriffs of all spouses of all candidates immediately.