The latest edition of Poland's wSieci (The Network) magazine exposes the Muslim rape epidemic right from the cover and it's anything but politically correct.

The cover shows a pretty girl in a dress resembling the flag of the European Union startled as dark hands try to grab her. The headline reads, “Islamic Rape of Europe.”

According to Breitbart, the magazine features articles titled ‘Does Europe Want to Commit Suicide?’ and ‘The Hell of Europe’. 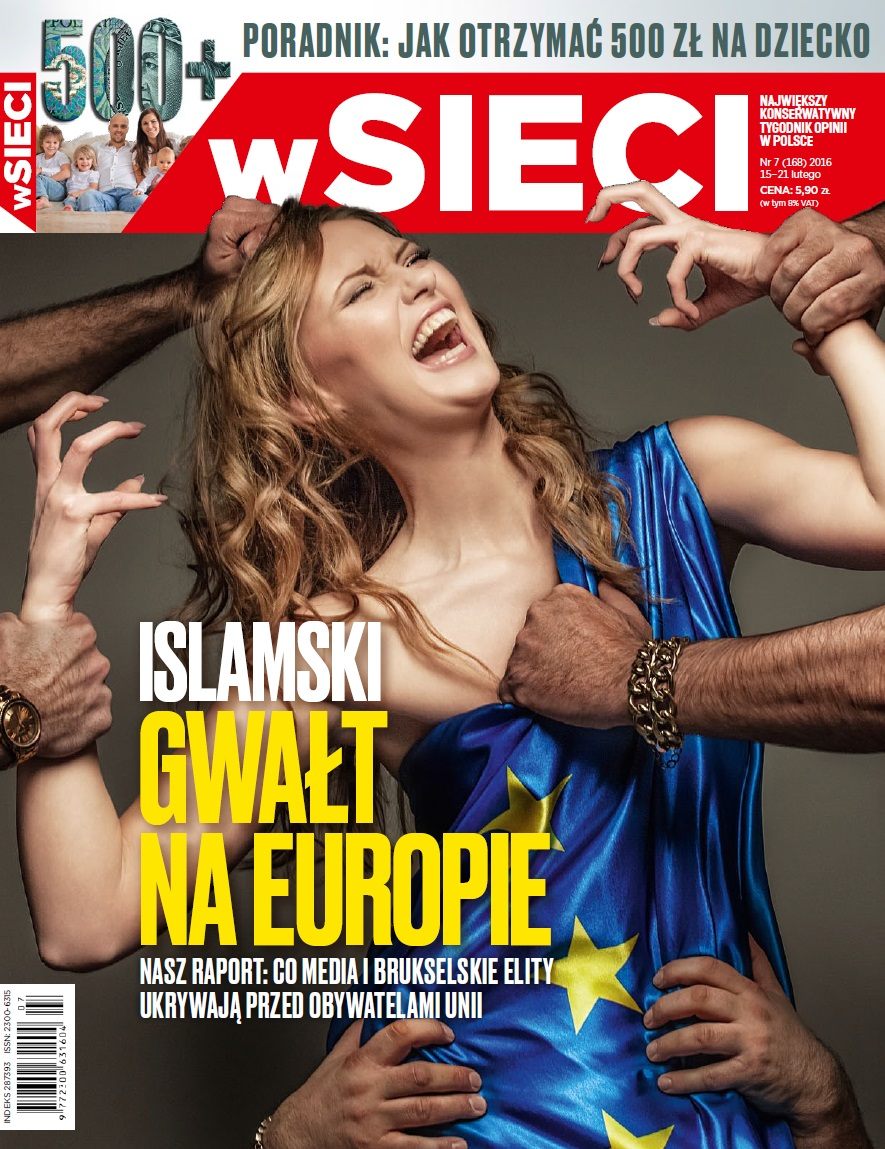 In the opening article, Aleksandra Rybinska writes, “The people of old Europe after the events of New Year’s Eve in Cologne painfully realised the problems arising from the massive influx of immigrants. The first signs that things were going wrong, however, were there a lot earlier. They were still ignored or were minimised in significance in the name of tolerance and political correctness.”

At a time when people have been arrested for voicing concerns about the mass influx of Syrian refugees in Europe, this magazine and its cover is a refreshing change of pace.

Of course we’d have to be able to read the content of the magazine article to determine if there is any misinformation.

But that cover is the opposite of misinformation.
It’s what actually has happened, and will continue to happen in the Islamic culture.

And the first step to victory against evil is revealing the truth.

Respect the truth.
And fight against political correctness, which is censorship and whitewashing in disguise.

Remember a lot of westerners died to save islamics – so far there has not been much thanks for that.

I would NEVER sign up to do that again. In fact I can name three people that I served with who are complete invalids today over that mess – two are on welfare with little to no government Vets Affairs support and the other is just scraping by.

We should have simply stood back and watched.

If things do not change, and soon, look to see Europe enveloped in war – caused by more than a million rapefugees that have been doing this (graphic):

I see that Lowes has got into the act as well.

Good on them. I will shop there a lot more.

So they speak from a position of weakness and lack of actual personal knowledge.

I suspect if they had been in the position we were in during our times in Gaza, Pally Territories, Syria, The Stan and more – they would not only understand, they would fear the future.

We seem to be willingly welcoming terror and evil into our entitled world at an ever increasing and faster rate than anyone who has experienced the truth could ever have predicted.

What we have – they want.

They also want to turn us into them.

Be afraid – if no one stands up to be counted it will happen.

As Europe goes, so will we – just a short time after.
Paul Belanger commented 2016-02-17 14:16:31 -0500
“So this Polish mag is the first to run the truth on the Rape of Europe…..and we used to make fun of the polish…”
It is history repeating, as the Poles were there at the Gates of Vienna in 1683 to repel the Muslim hoards of the day as well.
Martin Smith commented 2016-02-17 13:56:18 -0500
This is what also triggered the Muslim genocide in Kosovo. Yes that was whitewashed too, and the Serbs being the bigger monsters made sure no one saw this.
Andrew commented 2016-02-17 13:22:47 -0500
It’s just the psycho path inbred European “houses” and their Hapsburg chins ( a birth defect resulting from inbreeding ) play their psychotic games with their continent, much like they did by staging WW1 and WW2.