On Wednesday, Macleans’ Jaime Weinman was forced to correct his story on Liberal candidate Ala Buzreba after I and others pressured him:

(Update 1: Sheila Gunn Reid, who brought the tweets to public attention, points out that she is a private citizen and my choice of words made it sound like she’s a professional opposition researcher; she is not.)

Update 2: The original version of this post didn’t mention Buzreba’s most controversial tweet, though, honestly, if I’d wanted to cover up for her, I don’t think I’d have linked to the article where her mean tweets are quoted. Still, it’s a fair criticism. So here it is, all the way from ancient 2011.

This adds to my previous post, which shows the Media Party are in full-defence mode after Conservative supporters exposed Buzreba, but Michael Smyth of the Province has taken it to another level. 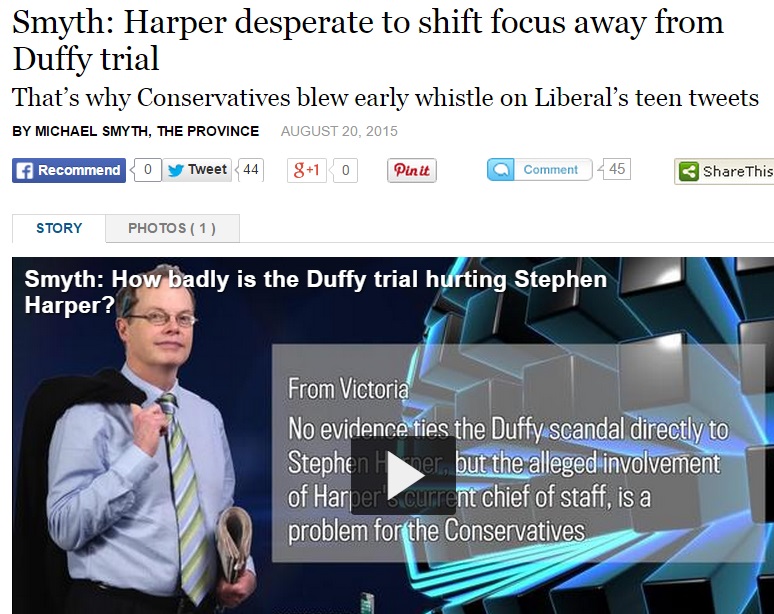 In a column, Smyth claims the Conservative Party was behind exposing Buzreba:

The revelation that a young Liberal candidate made idiotic statements on Twitter sparked debate about whether it’s fair to punish politicians for dumb mistakes they made when they were teenagers.

But the more intriguing question is this: Why did the Conservatives, who dug up the offending Liberal tweets, choose to release them right now instead of waiting until later in the election campaign?

In fact it was average Conservative supporters her found the tweets and I was the one who broke the story.

Then Smyth goes into full nutbar conspiracy theory mode, saying the Conservatives only exposed Buzreba to take the pressure off of the Duffy trial:

And even if no evidence emerges tying the Duffy deal directly to the prime minister, the drip-by-drip media coverage of daily courtroom revelations could erode soft Conservative support.

That’s why the Conservatives want to change the channel so badly right now. A conversation about some Liberal nobody’s teenage tweets? Perfect!

It’s not like Smyth doesn’t know who I am as he used to contact me fairly regularly when I was with the BC Conservatives.

Smyth is either completely incompetent for not even giving a cursory Google search, which would have immediately told him who discovered the tweets, or he is a blatant liar by running the column knowing it was citizen journalists who outed Buzbreba. His choice.