I’m going to visit them in their refugee camps. The Chaldean Christians are fleeing ISIS — Muslim terrorists who kill Christian men and rape Christian women and girls as young as nine years old.

I became interested in this when a friend showed me this Christian prayer book, written in Aramaic, that ISIS had tried to rip up; and when they couldn’t rip it, because it was so thick, they used it as target practice. 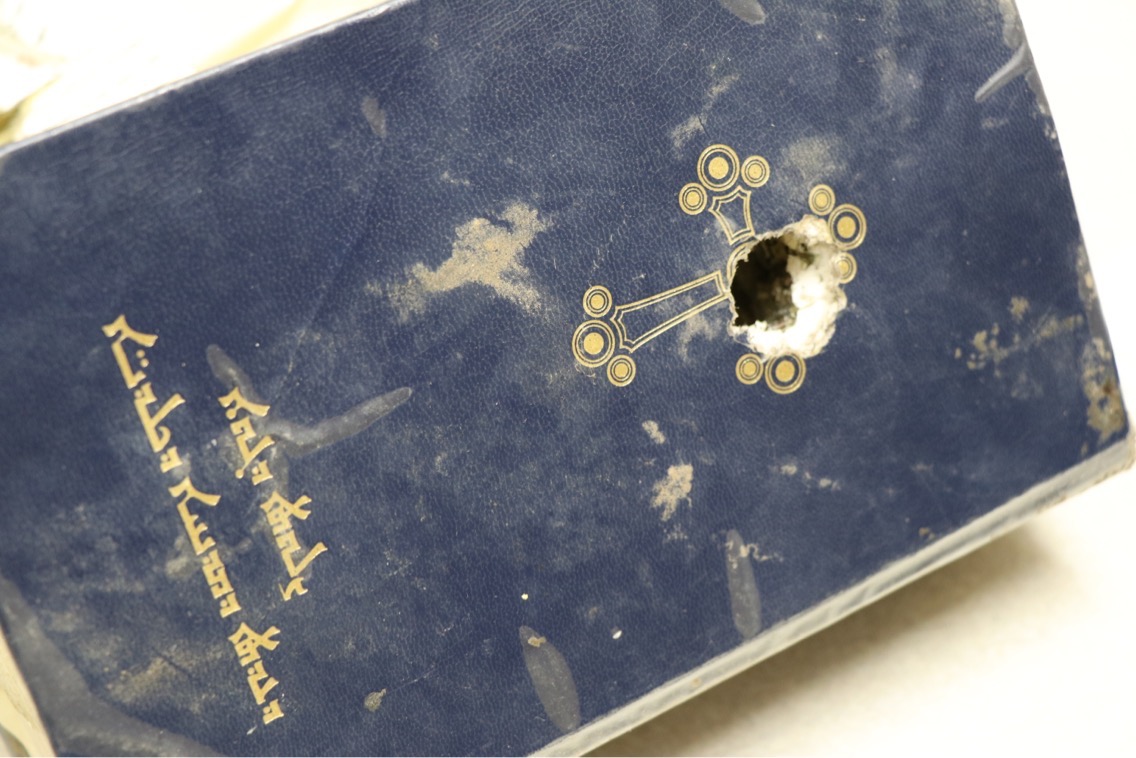 The ISIS terrorists literally used the cross on the prayer book at the bullseye for their guns. This defiled book was found in this church in the Christian town of Batnaya, that the Islamic State terrorists torched, before they were driven out of the town last fall.

This is a jihad, a Muslim holy war against Christians.

We always hear about Muslim refugees. But no-one is committing a genocide against Muslims. There are 50 Muslim countries in the world. But Christians are being ethnically cleansed throughout the middle east. That gets a tiny fraction of the media attention, and none of the political attention. Why?

Well, because they’re Christian. Who will save the Christians?

I will do my part and I’m bringing a team with me to help. Faith Goldy, the outstanding investigative journalist and passionate Christian is joining me. Along with three videographers. We’re going to do this right.

We’re going to tell the story that hasn’t properly been told yet: the deliberate ethnic cleansing of the oldest Christian community in the world — in the Biblical land of Nineveh. By the Islamic State.

We want to tell the story journalistically — we’ll give updates from the ground. But we also want to make a world-class documentary film, of a quality that we could distribute through a major network — I want to make the definitive documentary on the subject.

We’re not just going there on a journalistic mission. We’re going on a humanitarian mission, too. We’re bringing thousands of dollars worth of food hampers for the camp — enough to provide for 750 families. It’s going to cost us approximately $10,000 US dollars.

I know that $10,000 of food isn’t a lot — it’s a drop in the ocean. But here’s the real point of our humanitarian mission: I want to raise a million dollars for whoever is making the biggest difference on the ground. But I want to see it with my own eyes and make sure the cheque isn't being embezzled or wasted.

A million. I know that sounds nuts. But it shouldn’t be. That’s how much money the UN spends every two hours on Muslim refugees from the region — and they’re not facing a genocide.

The UN budget for the Syrian crisis is $4.7 billion dollars this year alone — but that’s overwhelmingly being spent on Muslim migrants. Muslim refugees are well taken care of — by the UN, by Angela Merkel, by Justin Trudeau, by the media.

It's the Christians who need our help. We’re launching SaveTheChristians.com to take care of the forgotten ones. Will you please help us?

We’re going to do this by crowdfunding. Two separate bank accounts that will not be mixed. One of them to do the journalism, to do our documentary film.

The other bank account is completely for the refugees. Other than the small processing fee charged by Generosity.com, 100% of all donations there will go to the Christian refugees. For food; for medicine; for rebuilding houses; for electrical generators — whatever we think is the absolute most needed, most reliable charity on the ground. And we’ll show you that with your own eyes — so you can see what we see, and be confident that it really is going to help Christians — not into the pocket of some corrupt United Nations official.

Please help us out. If you can, please contribute to our journalism fund, and to the humanitarian fund.

We need money for both. But if you can only donate to one, please give to the humanitarian fund. We want to raise a million dollars for Christians.

If not you, then who? And if not now, then when?

Culture wars bring a rise in censorship — and not just by the left (GUEST: Laura Lynn Tyler Thompson)