UPDATE: This video of Rachel Notley laughing at farmers' concerns about Bill 6 racked up over 175,000 views in 48 hours

WATCH to see why:

What's wrong with Bill 6 -- explained in under two minutes

UPDATE: Why is Notley trying to force farmers, ranchers into WCB system she once called “broken"?

UPDATE: Kill Bill 6 rally participants demand to be heard at largest gathering yet

UPDATE: Notley’s NDP fail to gauge huge turnout for Bill 6 info session, but want to tell farmers how to farm?

We’ve got to stop Rachel Notley’s plan to unionize family farms by ramming through Bill 6. 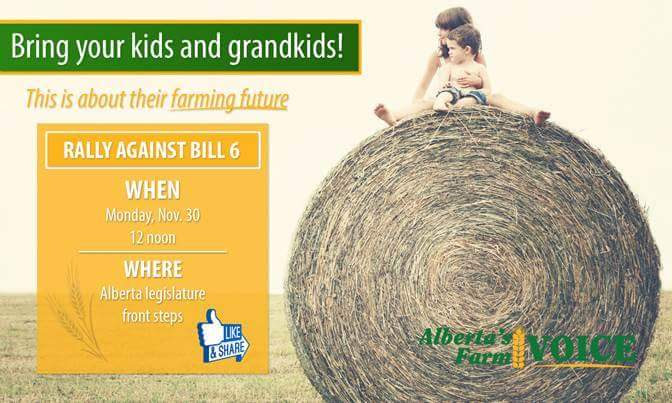 On Monday there will be rally to oppose Bill 6 right outside the Legislature in Edmonton.

Join Sheila Gun Reid along with hundreds of Albertan farmers who oppose Bill 6.

Let the Notley NDP know that she can't just force Bill 6 down the throats of Alberta farm families.

What: Rally against Bill 6

We need to show the Notley NDP that we will not go along with her destruction of Alberta farms.

Rachel Notley and the Alberta NDP are attacking Albertans again. This time it's called Bill 6 and its victims are family farmers and ranchers.

Bill 6 extends workers compensation coverage, occupation health and safety rules and labour laws to all Alberta farms, regardless of size and regardless of whether or not the work being done on the farm is paid or unpaid. Bill 6 also allows farm workers to unionize.

So much for the family farm!

Of course, the people who will be the most affected by this bill — the farmers and ranchers — weren't adequately consulted about the legislation. But you know who was consulted? The Alberta Federation of Labour.

I want Rachel Notley to stop Bill 6. I want her to give farm and ranch families a seat at the table when drafting safety legislation that affects them.

If you feel the same way please sign this petition calling on the government to stop Bill 6.

Show your support for the farmers that feed us all by adding your name to the list of Albertans that oppose this bad law.

The NDP want to cram Bill 6 down the throats of Alberta farm families before the legislature breaks for the winter in early December. We need to act fast.

That's why Wildrose Agriculture Critic and all around freedom fighter, Rick Strankman has agreed to present this petition in the legislature.

But that’s not all.

We want to commission a poll to find out what Albertans really think about Bill 6. We want to know your opinion, not just the opinion of the Alberta Federation of Labour. We want to know if you think family run farms need more workplace legislation.

Please donate to help us pay for this poll. Help us give you your say and your chance to be heard. This affects all Albertans. If you eat, you're involved in agriculture.

We call on Rachel Notley to save Alberta farms by revoking Bill 6.