We are just over a week removed from the San Bernardino terrorist attack that left 14 dead and about a month since the deadly Paris attacks that killed over 100.

Yesterday, Mark Zuckerberg issued a statement regarding the two incidents (sort of) and the alleged backlash Muslims are facing.

“I want to add my voice in support of Muslims in our community and around the world.

After the Paris attacks and hate this week, I can only imagine the fear Muslims feel that they will be persecuted for the actions of others.”


Three things of note here. Notice how the word 'terrorism' is missing? It's just “Paris attacks”.

Also absent is any mention of San Bernardino, despite the fact Zuckerberg posted the status from Palo Alto, California - the same state the attacks took place.

There wasn't any American flag profile picture feature popping up on Facebook following that attack either, unlike Paris where the feature sprung up over night.

Instead, he brings up 'hate'. What hate is he referring to? Donald Trump had just announced he wanted to pause Muslim immigration. Is Zuckerberg talking about him?

In the past, Zuckerberg has voiced his support for amnesty, something many conservatives such as Trump oppose.

It's obvious who he's talking about. Anyone with an opinion unfavourable of Islam.

“As a Jew, my parents taught me that we must stand up against attacks on all communities. Even if an attack isn't against you today, in time attacks on freedom for anyone will hurt everyone.

If you're a Muslim in this community, as the leader of Facebook I want you to know that you are always welcome here and that we will fight to protect your rights and create a peaceful and safe environment for you.”

There isn't very much to say about the first two sentences, except that if Zuckerberg decided to go on a ground tour of say Palestine, he'd most likely be stabbed to death. The question is how many seconds would it take before the first knife pierced his skin?

The last sentence is the most troubling of all and deserves the most attention.

“Fighting to create a safe environment” for Muslims should have you worried.

Remember when Mark met with Angela Merkel at the UN Development summit in September?

Merkel pressed Zuckerberg on his website not “doing enough to curtail racist comments” in regards to anti-illegal immigration.

“Are you working on this?” Merkel asked.

Zuckerberg was caught on a hot mic answering her. “Yeah,” he said.


What we know from this exchange is Zuckerberg has admitted to being in favour of limiting speech on his website – the largest social media realm on the internet.

So, what would be an ideal “safe environment” for Muslims?

Previously, Facebook has complied with demands from Turkey to remove 1,893 “pieces of content” deemed to be offensive despite the fact Zuckerberg claimed he would “never let one country or group of people dictate what people can share across the world.”

Quite the contradiction, isn't it?

You should be worried.

We live in a society where people – even liberals like Bill Maher – are called racists and “Islamophobes” for pointing out facts about Islam and how it's different than other religions.

One such Liberal, Tarek Fatah, voiced his opposition to Zuckerberg's post directly. 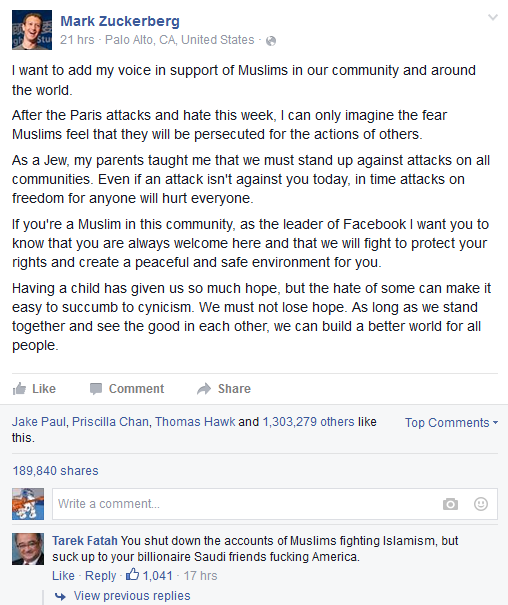 “You shut down the accounts of Muslims fighting Islamism, but suck up to your billionaire Saudi friends f***ing America,” he wrote. His comment has over 1000 likes as of this posting.

Fatah refers to the numerous times his Facebook account had been suspended for his vocal criticism of Islamism.

If Tarek Fatah's experience is any indication, expect Facebook to be much more active in censoring posts.

And with Facebook being such a huge source of news for millions and millions of people, this is yet another reason to fear for the future.

The only way to stop the Muslim invasion is to stop Trudeau. Then he can go to his heaven and claim his 72 recycled virgins. With his penis removed but not his testicles, he would still get the urge but would not have the ability. lol.

joe kotylak commented 2015-12-10 20:30:17 -0500
I was under the impression that Mark Zuckerberg was an intellectual Jew who knew history and the difference between right and wrong. I have to wonder when a terrorist attack strikes at the heart of those who seem to show apparent compassion for terrorists, what will they say then? Whoops?
J Kay Kay commented 2015-12-10 20:18:46 -0500
In case you missed it, here’s another Liberal, Ben Affleck freaking out when Bill Maher said that Islam isn’t compatible with democracy:
https://www.youtube.com/watch?v=vln9D81eO60
Paul Belanger commented 2015-12-10 18:43:01 -0500
Is this the same Facebook Muslim terrorists use when recruiting and communicating their plans around the world?
mark macfadzene commented 2015-12-10 17:40:25 -0500
When we lose the right to be different, we lose the privilege to be free…Nelson Mandela
R Neufeld commented 2015-12-10 17:09:10 -0500
I think Tarek should be invited for a segment on Ezra’s nightly show. There is certainly enough to discuss.
Don MacDonald commented 2015-12-10 17:08:58 -0500
Zuckerberg is another leftist ahole who’s got his head up his ass. This is how Zuckerberg , Obama and the rest of the leftards view the situation .
" In a continuing story we’re following, the BBC reported that they’re still dealing with the massacre of 240 children in a public school by shooters who yelled ‘Allah Akbar" as they slayed the children ". In a connecting story we’re following, a Muslim woman wearing a naquib stated that a man called her a name and hurt her feelings . The Mayor has called this a hate crime and has asked the police force to commit all their resources to find this perpetrator . The White House has said the President will address the nation tonight to discuss this heinous crime of hurt feelings".
Steve McQueen commented 2015-12-10 17:07:54 -0500
Zucks is just sucking up to government spin. Zucks story will change when governments change.
Gerry Tunnicliffe commented 2015-12-10 17:02:07 -0500
Too bad billions of dollars cannot buy Zuckeberg any common decency or integrity.
john day commented 2015-12-10 16:53:04 -0500
Where are the “moderate” muslims? There aren’t any!
Russell Piche commented 2015-12-10 16:34:05 -0500
ugh. what a suckhole.

gotta love Tarek Fatah though..guy’s got balls and calls it like he sees it.

Can anyone site an incident where is was clearly know that actions against the Muslim community was in direct response to an Islamic terrorist attack? I cannot, and if there are none, why the narrative?