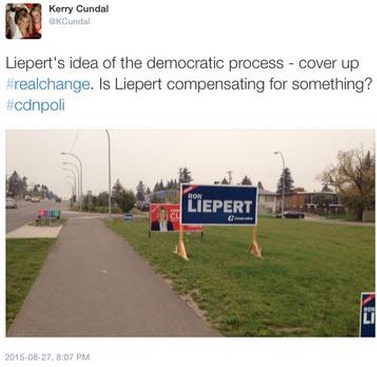 Imagine the Liberal outcry if a male Conservative made a similar sexist remark about a female opponent.

Cundal should immediately apologize to Liepert and if she does not, Liberal leader Justin Trudeau should make an example of her to state that blatant sexism won’t be tolerated in the Liberal Party regardless if it’s directed at men.

You must be logged in to comment. Click here to log in.
Andy Neimers commented 2015-09-02 01:35:17 -0400
Jimmy… you are not “evil incarnate” but rather “lefty stupidity incarnate” for all the world to see every time you post… Are you still willing to post that Hillary Clinton will be the next US president rather than the “overweight” lady in the orange perp suit waddling down the court isle for betraying US national secrets on an unsecured server?… Go Jimmy! Go!…
atokenconservative commented 2015-08-30 22:49:09 -0400
It’s only an issue because of the double standard. If it were the other way around, the press would be screaming!
Vlad Johnson commented 2015-08-29 15:16:22 -0400
Kerry Cundal looks like she was a hotty before she got so old. No wonder Cundal made the sexual reference – not as many young guys lined up to bang her anymore – that age thing kicking in must be really annoying for Kerry Cundal.

Join the club and enjoy such freedoms.
Rick Plesnik commented 2015-08-28 16:02:59 -0400
Just like Chrystia Freeland, only Conservatives are sexist while Socialists/Lieberals can say or do whatever they want………………!
Jimmy Da Silva commented 2015-08-28 14:42:46 -0400
False or fake outrage is right. Dean – have you already written your letter to complain?
Jamie MacMaster commented 2015-08-28 12:19:36 -0400
“Cundal should immediately apologize to Liepert and if she does not, Liberal leader Justin Trudeau should make an example of her to state that blatant sexism won’t be tolerated in the Liberal Party regardless if it’s directed at men.”

Are you serious? Man, I’d be hard-pressed to think of anything that better represents useless politically correctness than bleating for an apology for a false outrage. Leave that crap to the Liberals and NDP – fight back or shut up.