On October 10, author Tarek Fatah posted screenshots showing that Zunera Ishaq, who has become the (covered) face of the drive to permit the wearing of face coverings during Canadian citizenship ceremonies, has links to radical Muslim groups.

(2/2) ... Here are screenshots of #ZuneraIshaq's Facebook page showing her links to #ICNA and #JamateIslami. #elxn42 pic.twitter.com/qcBFCSWnCt

At my blog, I have written about the ICNA previously.

A little about the ICNA:

“The press release also recounted some of the views expressed at the aforementioned ICNA meeting. These included an exhortation that “Islam must be translated into political dominance”; pleas for support for “jihad” in “Chechnya, Kashmir, Palestine, Iraq [against U.S. forces], southern Sudan, and … in Bosnia/Kosova [sic]”; an appeal for unity among Pakistani Muslims against “Hindu Brahmins and Zionist Jews”; and an endorsement of Muslim women’s inclusion in carrying out jihad.”

Zunera Ishaq is employed by the ICNA Sisters, a branch of the ICNA.

Among the guests at the ICNA -ffiliated Al Falah Institute ("liked" by Zunera Ishaq) has been Khalid Yasin, who says AIDS was created in America and used by Christian missionaries to infect Africans.

The Al Falah Islamic Centre also hosted Bilal Phillips and Hakim Quick, both of whom have called the murder of gays justified in Islam.

The ICNA dominates the Thorncliffe Park Parents Association. I suspect the ICNA is heavily involved in the anti-sex-ed curriculum demonstrations at the local schools.

Note that one of the Facebook groups that Zunera Ishaq has joined, Jamaat-e-Islami, is the terrorist organization that was being funded by ISNA Canada.

ISNA had its charitable status revoked by the Canada Revenue Agency for funding Jamaat-e-Islami, because it is recognized as an officially designated terrorist entity by our government. 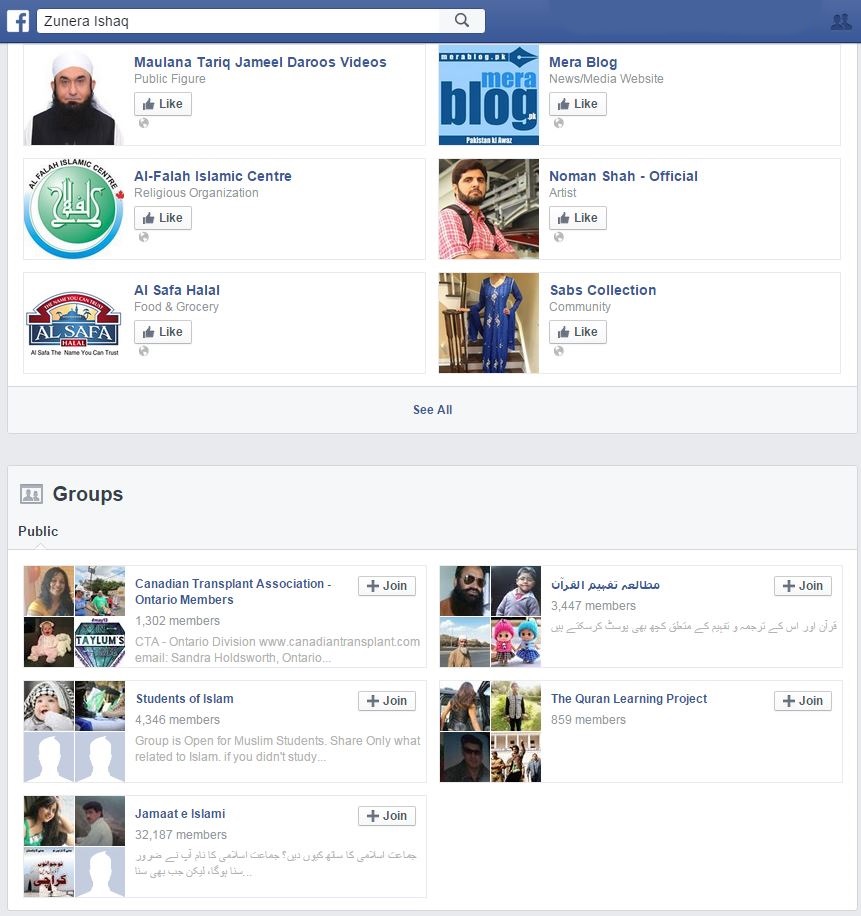 I first posted on the ICNA Sisters and the MCNA several years ago. The site has since been stripped of the documents, which I retain in my possession.

It is a rigid, almost militaristic organization that tracks the habits of its members in a cult like manner, as evidenced by this document, “Islamic Circle of North America Canada Sister’s Wing Monthly Individual Report Form for Members.”

A main focus of the group is Dawah or "calling to the faith" -- what a Christian might call "missionary work."The methodology is explained in the following document: "Islamic Circle of North America Canada Sister’s Wing."

I find it odd that the MCNA makes no mention of the veil being a requirement for students. In fact, it is explicitly stated that the face and hands are not to covered in this document, "Proper Islamic Clothing for Girls."

Zunera Ishaq belongs to a Quran Study Group. You can see it listed in the “Group” section of her Facebook page.

The name of the group is مطالعہ تفہیم القرآن roughly translated to Quran Study.

The group’s timeline is filled with Jihadist propaganda such as this:\ 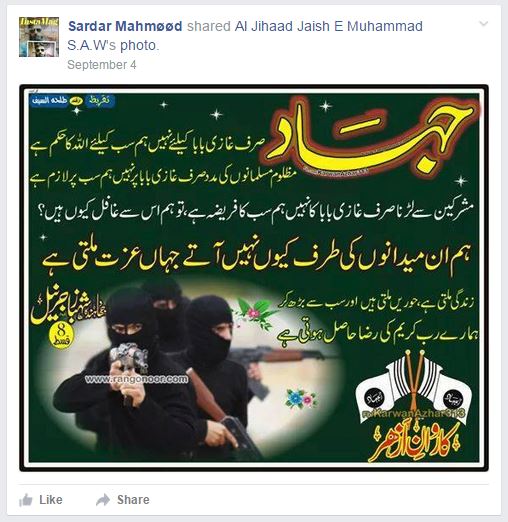 The English translation reveals the terror group named as Jaish-e-Mohammad, a Kashmir based Muslim terrorist organization.

Enough is enough: Every Canadian must show their face to vote.
SIGN OUR PETITION to Elections Canada now at ShowYourFace.ca

Believe that Muslim face coverings have no place in Canada?
The Rebel Store has the t-shirt for you:
“Separation of Mosque and State” — NOW in a SECOND cool design!

You must be logged in to comment. Click here to log in.
Edward Jobin commented 2015-10-15 22:18:21 -0400
Would it not be justice if she ended up having her citizenship revoked for having being linked to groups who call to sabotage Western civilization.
Brent McFadden commented 2015-10-15 09:19:00 -0400
Guess we can expect the masks for all girls in schools, stoning during recess , gotta love the UN controlled world.
Alan Sutton commented 2015-10-13 15:22:51 -0400
Wondered where the money came from for the court challenges,suspected this kind of backing. Confirmed.
John Albertan commented 2015-10-13 11:09:41 -0400
Tarek Fatah is an important national asset. He should be in the Senate.
Edward Jobin commented 2015-10-13 10:17:38 -0400
This is a youtube video showing Muslims setting up their own Shariya in Australia. https://www.youtube.com/watch?v=iN7eQyrDt-U
Edward Jobin commented 2015-10-13 10:16:14 -0400
Thank you so much for this informative story. A little while ago I posted a question we should ask her. Does she prefer Shariya law over Canadian law as this is why it is important to have your face uncovered while swearing an oath and because in other countries some Muslims openly profess their preference for Shariya and have gone about establishing their own Shariya courts. I also wondered in the event of so many politicians being hung by their own words from the past if she had any comments posted but since I don’t speak Arabic I thought any looking I did might be very limited. I also feared these posts could end up being redacted before anyone got a chance to see them if it was mentioned. So glad someone was Tarek was able to do this!
Peter Netterville commented 2015-10-13 10:05:12 -0400
Dylan said, “The best part about this is that the Harper government is sending weapons to Saudi Arabia. They let Saudi Arabia buy our Wheat Board and yet here we are concerning ourselves with Saudi Customs.”

What a load of lies!

Please prove your accusation that the Harper government is selling weapons to Saudi Arabia, and if you can’t, then your statement is just a load of lies.

And the Wheat Board was disbanded, not sold.


Paul Taalman commented 2015-10-13 09:57:51 -0400
Trudeau’s hidden agenda: Sharia Law in Canada. A vote for Trudeau is a vote for Sharia Law in Canada.
http://www.cbn.com/tv/embedplayer.aspx?bcid=1509282970001
The End is near folks. Are we just going to sit back and watch liberal politicians and the liberal left destroy our country and turn it over to people who just got here? Sad days for Canada. A once great a prosperous nation handed over to a primitive culture…

Drew Wakariuk commented 2015-10-13 01:22:16 -0400
I believe you have to uncover in SA anyways Dylan, what is your point on this story? Now tell me why the left selling us to China through debt is somehow good?
Drew Wakariuk commented 2015-10-13 01:21:15 -0400
Dylan Mclernon where did you hear that BS? The Wheat Board is voluntary now, by the way. And a Canadian company making stuff for the Saudis is not Harper sending them weapons. Now go get on your knees for Putin
Warren Wade commented 2015-10-12 17:52:22 -0400
War will change everything soon. We’ll all be Muslim, or we’ll kill 70% of the Muslim population. Either way the politically correct left will be eliminated and the world will be a better place :)
Charles White commented 2015-10-12 17:35:19 -0400
No surprise. The Islamists are masterful propagandists that put the National Socialists and Communist Socialists to shame; plus they benefit from a low information population. These propagandists have done an amazing job at making Mr. Fatah type Muslims, who are the majority, into Muslim heretics for the low information left.

How many of us have devout Muslim acquaintances or friends like Mr. Fatah, who shake their heads at our naivety. If we can’t help them by protecting them from what they tried to escape from, how will we eventually help ourselves?

Dylan McLernon commented 2015-10-12 17:02:37 -0400
The best part about this is that the Harper government is sending weapons to Saudi Arabia. They let Saudi Arabia buy our Wheat Board and yet here we are concerning ourselves with Saudi Customs. Ironic.
Hyacinth commented 2015-10-12 16:08:09 -0400
“Zunera Ishaq, who has become the (covered) face of the drive to permit the wearing of face coverings during Canadian citizenship ceremonies, has links to radical Muslim groups.”

I am not surprised at all. I assumed there was an ulterior motive behind her actions and there it is.

“Why are the main steam media party ignoring these facts?”
Why? Because the truth would surface.
http://www.truenorthtimes.ca/2014/08/06/justin-trudeau-visits-mosque-al-qaeda-ties/
http://www.torontosun.com/2015/08/18/liberals-mum-on-trudeaus-mosque-visit
http://www.thestarphoenix.com/mobile/story.html?id=11283160

Wayne Allen commented 2015-10-12 16:07:26 -0400
The Charter of Rights was put into the Constitution of Canada in order to allow the destruction of Canadian values, laws, standards, customs and culture by outsiders in our own country. The leftists like Pierre Trudeau blamed our traditional attitudes and values for the rejection of communism by the Canadian electorate. That is why the Liberals and NDP are so set against our traditional values and beliefs. Unfortunately these traditional values and beliefs. many based on Christianity are the source of our prosperity and political stability. I wonder how much of the court expenses for the niqab case came from Palestinian and Islamic and Canadian charitable contributions.
Brian Kelly commented 2015-10-12 14:12:04 -0400
Socialists/Communists are the ones who will destroy this country internally and not the Muslims. Radicals are moving into western civilizations and are attacking us through our courts, this will not stop until North America is an Islamist state. Will it get that far, absolutely not, socialists/communists are the minority and the majority are starting to take offence that the weak citizens in our country cannot and should not change our culture to a barbaric culture. Islam is not the religion of peace, all you have to do is open your eyes in the world and see the violence they bring with them. Socialists/Communists are to weak minded and spineless to stand up to this, when you are weak the strong will take advantage. Look at Obama and Putin, one weak and the other strong, Obama looks like the child and Putin the adult.
Eileen McRae commented 2015-10-12 14:04:37 -0400
This certainly is an eye-opener! Why are the main steam media party ignoring these facts? Canadians are being lied to by the media party!
Thinas Green commented 2015-10-12 13:05:49 -0400
Tarek is a true hero. He has done a lot to expose radical Islam and to prevent Sharia from infecting our civil courts.
Donald Craig commented 2015-10-12 13:05:33 -0400
cbc is on a first name basis with “zunera”..