Proponents of free speech and free expression across the world banded together on March 9 in a glaring display of unity, reigning hell on the fragile feelings of social justice snowflakes.

That hell was called #TheTriggering, and it was Twitter's top trending topic with over a hundred thousand tweets.

It was conceived by TheRebel.media's Lauren Southern and quickly took off. 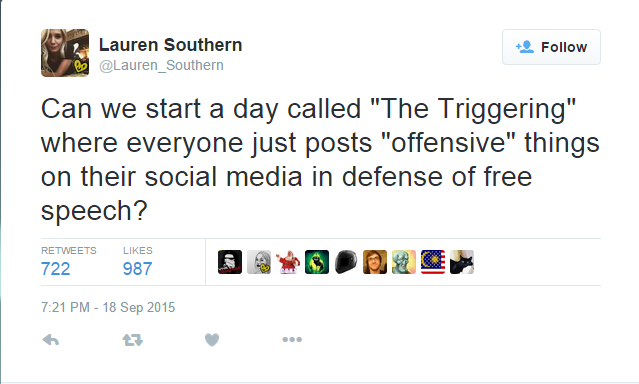 Some of the highlight-hashtaggers included Daily Wire Editor-in-Chief, Ben Shapiro:

Blaming society for your problems in the United States is just an excuse for you to be a failure. #TheTriggering 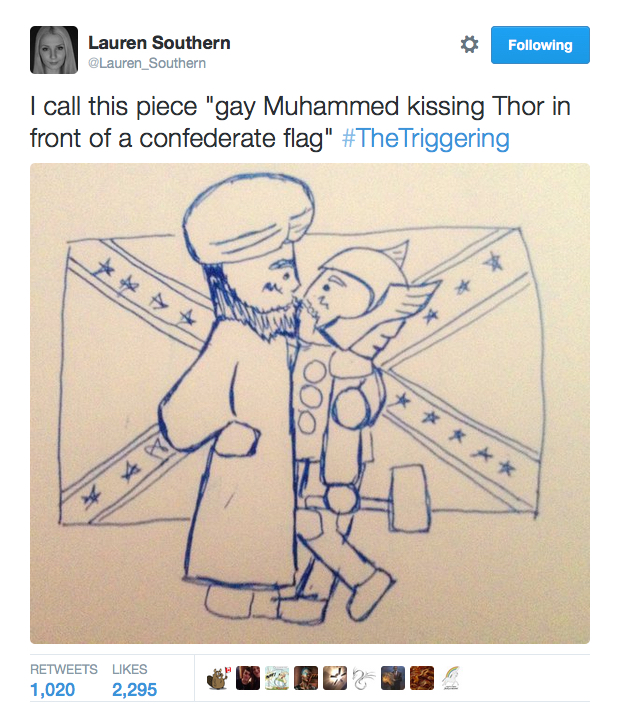 Normally, when a topic is trending, Twitter allows you to quickly join the conversation by tweeting with the same hashtag, even helpfully autocompleting it as you type it in.

But presumably to pacify the likes of Feminist Frequency and the other left-wing crybabies on its new Trust and Safety Council, Twitter disabled the autocomplete feature on the trending hashtag #TheTriggering, thereby reducing the reach and impact these "subversive" tweets might have.

Despite the pathetic attempts at suppression from the left, the explosive popularity of this trend underscores the fact that the battle for free expression is not being won by the social justice despots.

These left-wing loonbag fascists in academia who smear blood on themselves, riot and threaten physical violence are not the majority or a reflection of popular opinion.

There is an undeniable cultural movement of liberty minded individuals who are unafraid of new ideas and arguments, and that in itself is truly encouraging.

You must be logged in to comment. Click here to log in.
Jay Kelly commented 2016-03-12 01:00:02 -0500
It is like the crowd that heckled Trump in Jerusalem last December for saying he was “neutral” on the Palestine-Israel conflict. They booed him again when he made fun of Jews as “all good negotiators”. They did not have money, but they had voices and the courage to use them.
Jay Kelly commented 2016-03-12 00:57:47 -0500
Drew, you should not have to be a billionaire to speak your mind. Those free-speechers took to the streets knowing that could have a real impact against the establishment political parties.
Drew Wakariuk commented 2016-03-12 00:36:02 -0500
Jay that was more than speech. Speech does not shut down a rally, they were facists pure and simple. And they prevented free speech, they do not support it in any way.
Jay Kelly commented 2016-03-12 00:26:41 -0500
A huge rally of free-speechers gathered in Chicago tonight and shut down a major political party rally! It is amazing what people can do when they are not afraid to speak out.
Kim Hanson commented 2016-03-11 18:02:05 -0500
Just noticed the character limit is 1500 characters. Site is https://freezepeach.xyz
Kim Hanson commented 2016-03-11 17:39:26 -0500
I checked out an alternative to twitter called FreezePeach. Here’s and excerpt from their Terms of Use:

We don’t want to hear accusations or complaints about racism, sexism, homo- and transphobia. You’re big boys and girls, and if you’re capable of clicking on “Sign Up”, you’re capable of clicking “block” to not listen to anyone you don’t wish to. If you have an account here and someone is habitually bothering you with multiple accounts, notify an admin and we’ll work to find a solution. If you’re on the outside of this service whining about what someone is saying about you on here… fuck off. We’re not interested.

Could this be the next hot social platform?