A docker from Humberside has been investigated by police over a limerick he posted on Twitter after an officer claimed it constitutes a “hate incident” against transgender people.

Harry Miller, 53, from Lincoln was contacted on Wednesday by a community cohesion officer following a complaint that had been made about the plant and machinery dealer’s social media posts.

Citing 30 potentially offensive tweets, the PC singled out a limerick Mr Miller had retweeted which questioned whether transgender women are biological women. It included the lines: "Your breasts are made of silicone, your vagina goes nowhere.”

#Brexit won't mean a thing if you don't fix the crazy PC dictatorship you have in your parliament.

The British police are now persecuting people who haven't even committed any crimes but have conservative views and share them on social media. #Orwell would be proud.#UKisAjoke pic.twitter.com/Kbp8JJKb3i

Miller's tweets discussing the investigation have been restricted but were screen-capped. 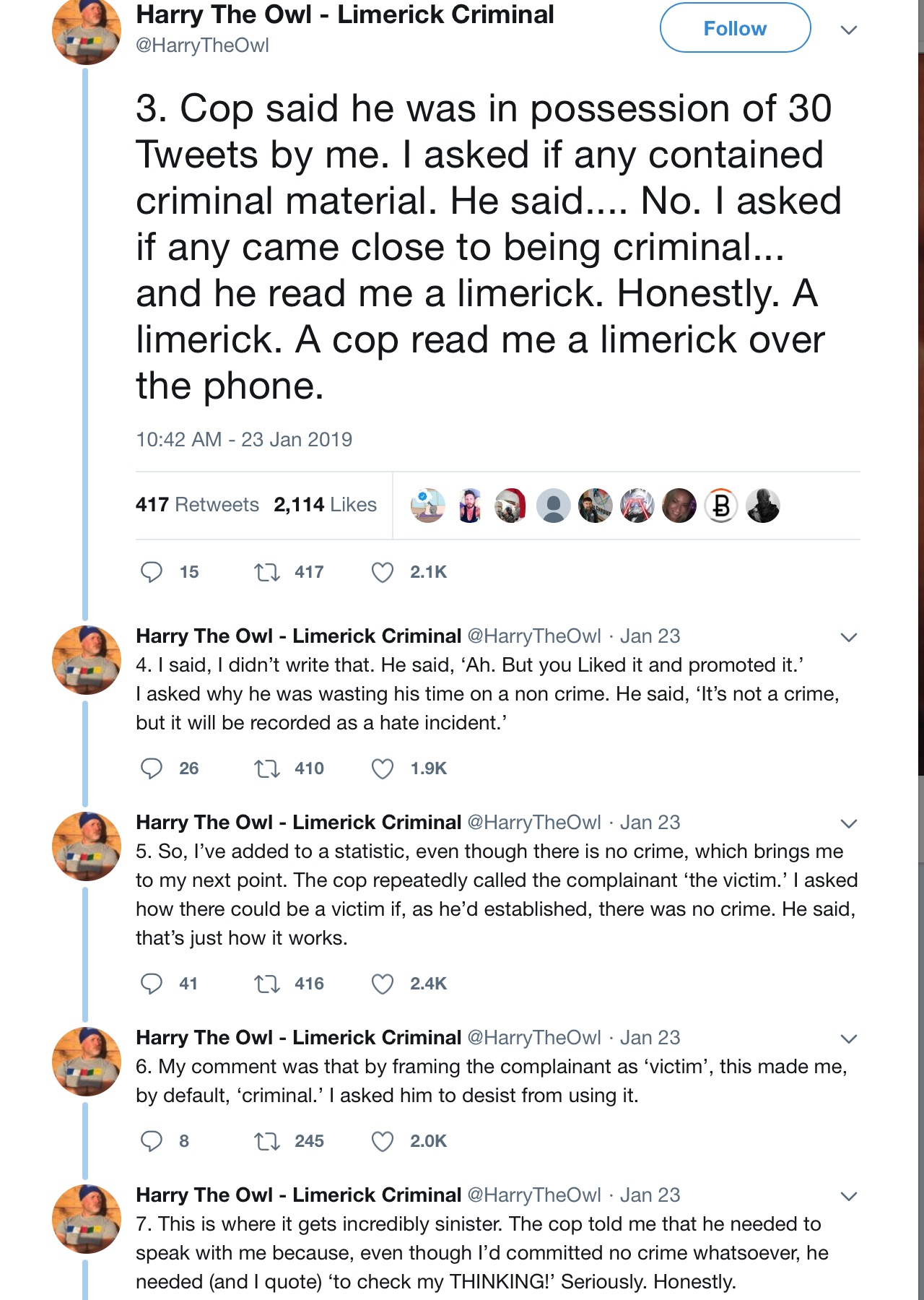 A proposed tightening of immigration rules could have a significant impact on refugees' ability to pay unforeseen costs of vital services like medicine and healthcare.

The Danish government’s projected “paradigm change” in asylum policy could reduce the access of refugees to vital economic support in paying for medicines and other necessary one-off costs.

The Danish Refugee Council (Dansk Flygtningehjælp) has said that the proposal, which underwent the first round of political process in parliament on Thursday, would “limit individual refugees’ ability to get help” with the costs of medicine, dental care and other “necessary one-off costs.”

The bill also provides for a 2,000-kroner reduction in benefits payments to refugees who provide for dependents.

Populist Italian Interior Minister Matteo Salvini has announced that law enforcement will be conducting an investigation into the Sea Watch migrant transport NGO whose vessel is moored off the coast of Syracuse with 47 migrants on board.

The Italian authorities are said to be investigating whether or not the German-based NGO vessel Sea Watch-3 has been complying with international regulations while it remains unable to access Italian ports, Il Giornale reports.

“Law enforcement is underway to look at the correct or incorrect behaviour of this NGO which seeks to impose its own legislation on a country like Italy, which instead has rules that must be respected,” Salvini said.

4. Gilets jaunes leader hit in eye during protest “will be disabled for life”

A gilets jaunes (yellow vests) demonstrator injured in the eye at a demonstration in Paris will be disabled for life, his lawyer has said.

Jérôme Rodrigues, a high-profile member of the protest movement, claims he was struck by a “flash-ball”, a launcher used by French riot police to fire large rubber pellets. They have been blamed for dozens of injuries, some serious, including the loss of an eye.

Investigators are looking into the incident after police reportedly insisted Rodrigues’s injuries were caused by a crowd-control grenade that exploded near him, a version of events his lawyer “categorically” denied.

PARIS (AP) — French police are investigating how a prominent yellow vest protester suffered a dramatic eye injury in Paris, as well as other protest-related injuries.

Violence by protesters and the sometimes-aggressive police response have prompted a national debate since the anti-government movement kicked off two months ago.

A counter-demonstration is planned Sunday in Paris by groups calling themselves the “red scarves” and “blue vests” to protest the violence.

Yellow Vest demonstrations have been taking place every Saturday for two months. Sometimes violent clashes take place, causing injuries among police, but also to demonstrators. Journalist David Dufresne has been collecting video footage of police attacks and posting everything to Twitter. Watch as Dufresne is interviewed about the violence and explains why he’s calling for a ban on the flashball weapon used by police.

A Swedish man in his 70s faced a court in the town of Uddevalla this week after social justice activists reported him to the police for labelling Somali migrants “lazy” on social media.

The court appearance took place after the man was reported to police by the left-wing activist group Näthatsgranskaren, Swedish for “Network Examiner,” for posting on Facebook that he believed Somali migrants to be “lazy people,” Nyheter Idag reports.

The man’s comments were made in response to an article by Swedish public broadcaster SVT which pointed out that around 20 percent of Somalis in Sweden were out of work, saying the article was a lie and that “no Somalis can work they are the lazy people in this world.”

Though the man posted the comment last year, police have only now picked up the case thanks to the activist group which has claimed responsibility for an increase in hate crime reports and prosecutions since they began their operations. In February of last year, they said they had reported at least 800 people to the police.

8. US calls to “stand with freedom” in Venezuela as EU gives ultimatum

United Nations (United States) (AFP) - The United States pressed all nations Saturday to “stand with the forces of freedom” in Venezuela, encouraged by a tougher European line as Russia stood in the minority in backing embattled leader Nicolas Maduro.

US Secretary of State Mike Pompeo made a forceful case at a special session of the United Nations Security Council, where he described Maduro as part of an 'illegitimate mafia state' responsible for Venezuela's economic collapse.

With mounting protests over Venezuela's crisis in which more than two million have fled shortages of basic food and medicine, Pompeo asked all nations to follow the US in recognizing opposition leader Juan Guaido as the interim president.

“Now it is time for every other nation to pick a side. No more delays, no more games. Either you stand with the forces of freedom, or you're in league with Maduro and his mayhem,” Pompeo said.

9. Venezuela crisis: White House “will respond to threats against diplomats”

US National Security Adviser John Bolton has warned Venezuela that any threats against American diplomats or opposition leader Juan Guaidó will be met with “a significant response.”

Mr Bolton tweeted on Sunday that any such "intimidation" would be "a grave assault on the rule of law.”

His warning comes days after the US and more than 20 other countries recognised Mr Guaidó as interim president.

President Maduro was sworn in for a second term earlier this month after an election marred by an opposition boycott and allegations of vote-rigging, triggering large protests.

10. Muslim police officers, others beat and arrest Christian in Kenya

Accompanied by two Muslims of Somali descent who had attacked him previously, the policemen arrived at the home where Hassan (surname withheld for security reasons) lives with his widowed mother, and the officers along with the two others punched, kicked, trampled and struck him with blunt objects, relatives said.

“The police arrived and carried Hassan away with blood flowing from his body,” his mother told Morning Star News, adding that one of the officers was a Muslim relative of Somali descent who has habitually joined other Somali Muslims resident in Nairobi in attacking her son. In Saturday’s attack, Hassan lost teeth and suffered leg, chest and back injuries, she said.

The crime of Muslims raping non-Muslims needs to be classified as a RELIGIOUS HATE CRIME in Canada! Raping the non-Muslim woman or child (as in Marissa Shen’s case) is a form of Islamic Jihad. Our politicians need to get busy on this matter.

Double or triple the punishment for the RELIGIOUS HATE CRIME FACTOR!

WHAT IS THE GOVERNMENT DOING ABOUT THE MUSLIM “RAPE FATWA”???

WILL THOSE ISLAMO-LIBERALS SIMPLY “IGNORE IT”????

I won’t ignore it, but the Liberal Islamo-Femenazis will ignore it, and you can bet your last loonie on that!

Wanna get the Islamist PM out of office? Tired of JIHADI JUSTIN’S “new recruits” that he has planned for you and your department? Perhaps you don’t want to be replaced by them? Then why not become one of us? That’s what the cops are doing in France.

Anyway, here’s how YOU at the government can help Canada…

“IF YOU HAVE ANYTHING TO LEAK TO THE MEDIA, DROP IT OFF WITH THRE REBEL.

THE REBEL WILL “SPILL THE BEANS” TO THE PUBLIC. IT MAY BE THAT YOU HAVE PICTURES OR RECORDINGS OR WHAT SHOULD BE “NEWS STORIES” THAT ARE EMBARRASSING TO THE ISIS-SYMPATHIZING/ HARDEST-OF-THE-CORE WAHHABI SALAFIST WHITE HELMETS LOVING ISLAMO- LIBERALS.

GOT A RECORDING OF A TELEPHONE CALL THAT JIHADI JUSTIN MADE? SAY, THAT REMINDS ME! WOULDN’T IT BE A “REAL SHAME” IF JIHADI JUSTIN WERE TO HEAR HIS ISLAMIZATION PLANS THAT WENT DOWN ON THE ISLAMIC ISLAND DURING JIHADI JUSTIN’S SO-CALLED “CHRISTMAS VACATION”, BEING PLAYED OVER THE RADIO STATIONS?

DO YOU GET THE PICTURE? DO YOU SEE HOW THIS CAN POSE A PROBLEM AND TOSS A STUMBLING BLOCK IN FRONT OF JIHADI JISTINS ISLAMIZATION PLANS?

THIS OFFER IS GOOD ALSO FOR ANY LIBERAL POLITICIAN WHO WANTS TO DO RIGHT FOR CANADA, BUT ARE EMBARRASSINGLY STILL EMPLOYED BY THE LPC. LIBERALS, YOU CAN SQUEEL ON YOUR ISLAMIST BOSS ANONYMOUSLY!

CBC & CTV EMPLOYEES ARE MOST WELCOME TO SEND IN EMBARRASSING STUFF ON THE JIHAD SYMPATHIZING LIBERALS. DON’T FORGET TO SPILL TO THE REBEL ALL THE ROTTEN STUFF THAT IS GOING ON BEHIND THE SCENES AT CBC & CTV. ESPECIALLY TO THOSE WORKING IN THE COMMENTS SECTION WHO ARE TOLD HOW AND WHAT TO CENSOR IN COMMENTS!

Here’s the problem as it stands… I don’t know of any Secure Drop for The Rebel.

I recommend that The Rebel IMMEDIATELY LOOK INTO setting up a SECURE DROP like CBC has. This could be a venue by which police, military, National Security, politicians of all stripes, and even other media company employees could send in a SECURE/SECRET ANONYMOUS WAY any tips or info that the public needs to hear! Besides, I’ve got a "package of “SENSITIVE DATA” for The Rebel that I want making its way into the hands of the right people.

Here is the CBC Secure Drop link for an EXAMPLE. There are some good TIPS on that link on how to remain secure over the internet when spilling the beans.
https://securedrop.cbc.ca/

Shrug. Britain and Sweden: completely stupid and nutted little countries. What Canada wants to be when it grows up.
Robert McClelland commented 2019-01-28 15:59:45 -0500
WH Petition to impeach Bablin’ Nancy for treason only 20,000 shy of getting an official response.
https://neonnettle.com/news/6333-petition-to-impeach-nancy-pelosi-for-treason-goes-viral
🤞
Robert McClelland commented 2019-01-28 15:52:07 -0500
Border Patrol wives extend a heartfelt invitation to Bablin’ Nancy Pelosi to come visit them at the border.
https://100percentfedup.com/whoa-border-patrol-wives-invite-nancy-pelosi-borderoffer-to-loan-her-a-pair-of-big-girl-pants-video/
😎😁🤣
Sheldon Eisler commented 2019-01-28 14:18:10 -0500
#1- who cares I call em like I see em stuff political correctness!!! I’m more concerned about the “Community Cohesion Officer” really what the hell is that all about-frickin speech police.
Glenn Craig commented 2019-01-28 14:12:23 -0500
You better beware Michael Miller
Some poetry can be a killer
Exposing the fanny of Michael the Tranny
Is likely what got Phillis Diller