1. Iran moves missiles to Iraq in warning to enemies

The Iraqi government and military both declined to comment.

The Zelzal, Fateh-110 and Zolfaqar missiles in question have ranges of about 200 km to 700 km, putting Saudi Arabia’s capital Riyadh or the Israeli city of Tel Aviv within striking distance if the weapons were deployed in southern or western Iraq.

The Quds Force, the overseas arm of Iran’s powerful Islamic Revolutionary Guard Corps (IRGC), has bases in both those areas. Quds Force commander Qassem Soleimani is overseeing the program, three of the sources said.

2. “We're insane!” Matteo Salvini blasts EU migrant crisis after police commissioner is attacked with a razor blade in his home by two thieves one of whom is in Italy for “humanitarian reasons.”

Italy's far-right Interior Minister Matteo Salvini has blamed an attempted robbery of a Sicilian police commissioner on the EU migrant crisis, claiming his country “is insane.”

Nuccio Garozzo woke to find two men having broken into his home in Catania, Sicily, and was reportedly attacked with a razor blade when he took on the would-be burglars.

Local media reports that the two fled the scene, but that Mr Garozzo was able to apprehend one of them, who was later identified as an 18-year-old Gambian migrant.

Salvini launched into a furious rant about implementing his League Party's anti-immigrant policies and published images of the bloodied Mr Garozzo on his Facebook.

“We're insane,” Salvini wrote, stating that the attacked Mr Garozzo had “all my solidarity.”

A Toronto taxi driver is facing charges after a woman claimed she was sexually assaulted in the city’s Queen West neighbourhood.

The 32-year-old woman told police that she was sexually assaulted after she was picked up by a taxi driver at around 4 a.m. near Queen Street West and Tecumseth Street on Saturday.

Police allege the taxi driver stole the woman’s credit card and used it to make purchases at multiple locations in the city.

Investigators made an arrest in the case on Wednesday when a suspect turned himself in.

4. Frankfurt’s Frosch Club attacked by group of 15 or 20 migrants with knives and clubs shouting “Allah hu ackbar - we will stab you all”

Hundreds of people took to the streets of Gothenburg on Friday as part of a counter-protest against a rally led by the newly-founded Swedish right-wing party Alternative for Sweden (AfS).

While AfS party member Per Sefastsson was addressing scores of supporters, a larger group of counter-protesters gathered, holding banners and chanting slogans such as "Stop racism," "No Nazis on our streets" and "No one is illegal."

The Sweden Democrats presented their candidates ahead of the general elections in the Swedish town of Malmo on Friday.

SD supporters were met by a group of chanting counter-protesters.

Police were deployed at the scene to keep the two groups apart.

The elections take place this coming September. Most polls in recent weeks have placed the SD at between 18.5 percent and 22 percent, putting them within reach of becoming the second largest party.

7. ANOTHER terrorist in Whitehall: Chilling moment ISIS bomb plotter, 21, who wanted to assassinate Theresa May strolls just yards from where Westminster attacker struck

An ISIS fanatic who plotted to blow up the gates of Downing Street and assassinate Theresa May has been jailed for a minimum term of 30 years.

Naa'imur Rahman, from north London, wanted to set off a bomb in Whitehall before launching a “full frontal assault” on Number 10 to try and kill the Prime Minister.

Footage shows the jihadi strolling around Whitehall - just yards from where Westminster attacker Khalid Masood struck - as he planned his atrocity.

The 21-year-old had been in contact with his uncle, who had already travelled to Syria and joined ISIS, and they had exchanged bomb-making instructions.

AMSTERDAM (AP) — Two people wounded in a knife attack at the Dutch capital’s busy main railway station on Friday are both American citizens who were visiting the Netherlands, the U.S. ambassador said Saturday as police investigated possible motives, including the possibility it was an extremist act.

Police shot and wounded a 19-year-old Afghan man immediately after the attack and are questioning him as a suspect.

A dramatic photo captured by a passerby shows two police officers pointing their pistols at a man wearing jeans and sneakers lying on the ground inside a tunnel in the station. 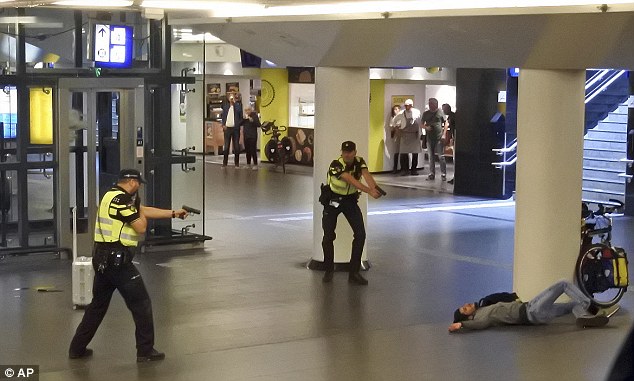 10. Matteo Salvini explains why he looks forward to being interrogated for keeping migrants on boats

Robert, I opened your link and I find it disturbing, the fact that this Guy is a Muslim.
What he is saying is that these rockets are not capable of hitting Israel.

Sky News reported on this story and they state that the rockets ‘are’ capable of reaching Israel. This is why Israel has put its troops on high alert. Expect them to take out the launch sites and the missiles.

Your man states that the missiles have been sent back to Iran. This smells of false news to me.

Just my opinion and I could be wrong………Maybe!

C’mon Scheer..trudeau..Bernier..Let’s hear ALL!! each of your responses.. I dare you!!

Oh yea okay, but they mean it in the most peaceful way. After all, they are the true representatives of the “religion of peace”!

I mean, obviously, anyone who thought otherwise is an racist, bigot, homophobe, epistemophobia, Nazi … … oh, and of course an islamophobe.
Carole Massé commented 2018-09-02 18:23:01 -0400
R. Greely, the video you posted is hearthbreaking. The wrath of God, the loving one, the true God, will be terrible one day. All we should do for now is to pray that He wins over this evil.
Robert Greeley commented 2018-09-02 17:55:48 -0400
Hey..When are we going to see a commercial during Hockey Night in Canada about Canada being a place to visit showing this as an advertisement?

Just one new attack to report since yesterday, with one death and 18 injured. .
Carole Massé commented 2018-09-02 15:17:22 -0400
I hope those leftist German hugging the angry muslims in the club got their lessons. Hug all you want, they’ll kill you anyway.