1. First Non-Muslim Indonesian governor in 50 years is back in court on blasphemy charges.

This video shows massive crowds screaming for his death, for daring to suggest that a non-Muslim can have political authority over Muslims.

A charity worker who campaigned for female emancipation in Yemen has been shot dead in an assassination attempt that has left other activists in the city of Taiz fearing for their own safety.

Amat al-Aleem al-Asbahi, who worked to improve female literacy in the war-torn country,  was killed on 25 December by two motorcycle riders as she walked on a busy street in the city centre.

I wonder what Meryl Streep would have to say about that.

Tailors and retailers across Morocco have reportedly received notices from the Interior Ministry, urging them to stop the sale of burqas.

Burqa producers and retailers have been issued written warnings of their obligation to cease making and/or selling the garment. They have been further instructed to get rid of their burqa stock or convert it within 48 hours, or risk confiscation of all goods. [...]  “We have taken measures to completely ban the import, manufacture and marketing of this garment in all cities and towns in the kingdom,” a senior official at the Ministry of Interior was quoted by Moroccan news outlet Le360 as saying.

5. Italian TV show hosted by Matteo Salvini of the Northern League analyzes the real costs of supporting migrants in Italy, versus supporting them financially in Africa.

6. Students demand Plato, Descartes and other white philosophers be dropped from curriculum.

While not directly a story about Islam in the West, this is clearly a story about far-left wing extremists trying to destroy classical thought, and even reason itself as a system of thought. That pretty much only leaves two things. Marxism and sharia.

They are said to be the founding fathers of Western philosophy, whose ideas underpin civilized society.

But students at a prestigious London university are demanding that such figures as Plato, Descartes and Immanuel Kant be largely dropped from the curriculum because they are white.

The School of Oriental and African Studies (SOAS)’s student union is insisting that when studying philosophy, “the majority of philosophers on our courses” should be from Africa and Asia.

They say it is part of wider campaign to “decolonize” the university, as they seek to “address the structural and epistemological legacy of colonialism.”

It would be fun to hear them-back peddle when someone explains to them that Karl Marx was also white.

"The bulk of Islamic Doctrine is about politics, NOT about religion".

8. South African mosque which blares its call to prayer over loud speakers five times a day, gets a pig snout at the gate. Mosque reacts; charges filed.

The 15-centimetre long butchered snout, with a part of its mouth still attached, was discovered by worshippers just before early morning prayers on Saturday morning.

The action has been condemned by Muslim authorities, the SA Human Rights Commission and Cape Town Mayor Patricia De Lille, who said “the heinous crime would not be tolerated”. [...]

“A criminal case of crimen injuria is under police investigation following an incident where a pig snout was placed at the entrance of a mosque in Simon’s Town,” Traut said. [...]

The first Muslim prayer of the day, called fajr, takes place at about 4am.

A local resident was also arrested for suggesting on social media that someone should burn down the mosque because it disturbed all the townspeople five times a day with the call to prayer, the earliest one at 4 a.m.

The 57-year-old man raced to the crime scene in the town of Kleve after his daughter telephoned him to say; "There's a man following me home dad....."

When he got there the man had punched his daughter almost unconscious, was on top of her and tearing at her clothes after dragging her from the side of the road into undergrowth. [...]

The girl called her father when she began crossing from side to side of the road, each time her would-be attacker trailing her.

Her attacker, 23, is understood to live in an asylum seekers' home in Kleve.

"This man in a hero," said police.  "He saved his own daughter from something terrible happening to her."

This shows that Germany is not as morally inverted as the UK is, where police arrest parents who try and rescue daughters from Muslim sex slave gangs.

10. Here is a stunning short video on Twitter by what appears to be a group called Ex Muslims. This one is by a Saudi army NCO who explains why he renounced his Islamic faith.

Much of what he says would dovetail nicely with what Winston Churchill said about Islam in his book, The River Wars. 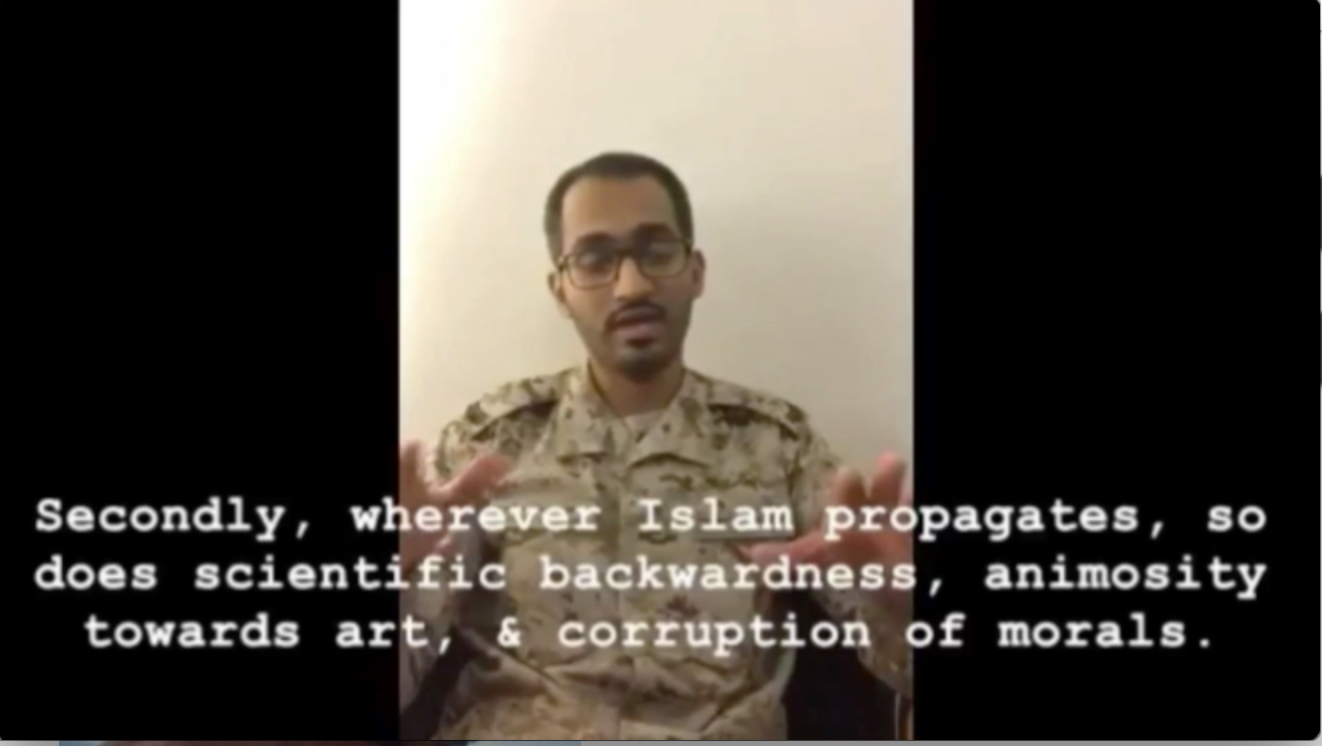