Liberal leader Justin Trudeau has some damage-control to do after Toronto Star reporter Desmond Cole called him out on statements made during the women's forum #UpForDebate last night: 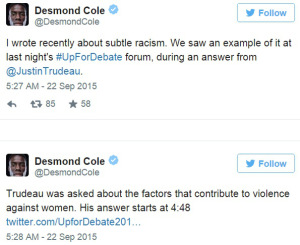 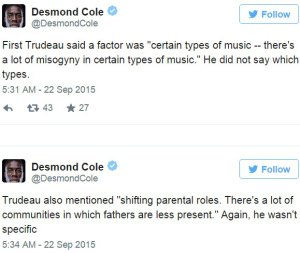 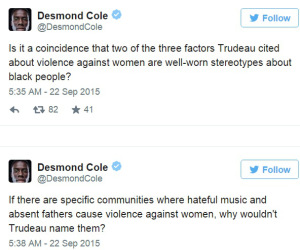 You can read more of Cole’s tweets here.

The media went absolutely ape accusing PM Stephen Harper of being racist over his “old-stock Canadians” phrase, but I guarantee you these dog-whistle comments by Trudeau will never get the same attention.


SIGN UP FREE for Election 2015 coverage from The Rebel team!
Don't miss a minute of our exclusive interviews and investigations!

Believe that Muslim face coverings have no place in Canada?
The Rebel Store has the t-shirt for you:
"Separation of Mosque and State"

Yup, JIMMY. And whores are whores.

Oh I get it. And you are wrong – which I clearly proved and is the very reason why you dodged my post completely. Sure, swearing isn’t “nice” – but Steve Jobs for example was smarter than you and he often used vulgarity, so obviously it’s a complete fallacy that curse words are only used by the lower class and uneducated.

There are countless examples just like Steve Jobs. Would you like some more highly respectable, successful and intelligent people that find joy in colorful language. And I am sure you haven’t heard of David Mamet.

What is it you do for a living?

Money is money and to be perfectly honest – the general public has worst taste in everything, so that’s hundreds of millions of people to make money off of.

No I don’t work for the CBC.

While this is a movie about salesmen of which I am not – this is the kind of world that I live in. This is my culture.

Allow me to reiterate that some of most intelligent, educated and successful people in the world like to use profanity. Some of the greatest writers in history like David Mamet for example is a master of profanity. Do you even know who David Mamet is?

I am quite sure that people didn’t think less of Steve Jobs for all the swearing he used to do.

Ever worked at a newspaper or TV station? You will hear the word fuck 400 times before lunch. Are these uneducated people? Or is it just a different kind of culture?

Apparently you haven’t seen any of Gavin’s media appearances where he has told people to fuck off and they have had to bleep him. And why does he probably swear – because he was surrounded by people who do the same thing in the media industry and it’s just part of the culture for him.

But sure – I understand you having this incorrect view since you have obviously been living a sheltered life and it would seem odd for there to be a culture where people use profanity at the pencil factory or whatever it is that you do for a living.
Jamie MacMaster commented 2015-09-24 08:34:45 -0400
“Even stupid people with the worst taste in everything need to be entertained.”
You have a point, JIMMY – but how low does someone have to stoop to accommodate them?
Darcey Smith commented 2015-09-24 00:04:17 -0400
Jimmy " potty mouth " Da Silva, Once again HYACINTH not only makes the better argument than you but comes off as much more intelligent.
I’m going make an assumption myself and say that you work for the CBC given your comments in this article.
As I said before, I lived and worked in a neighbourhood full of drug addicts and drunks and very rarely heard swearing let alone anyone trying to convince other people that’s it’s common and sophisticated.
Hyacinth commented 2015-09-23 23:43:27 -0400
Well, you know the old saying about assuming. 44 eh? Still just a young pup wet behind the ears, once you pass (at least) 50 then come talk to me about living/life experience but not until then.

By the way vulgarities are not “common” words in the context that you have interpreted them, it is “common” but in the context of low brow, lower-class, uneducated, etc.. Gavin uses vulgarity as a form of biting humor, satire, which may at times have merit, but swearing to get your argumentation across or expressing opinions is just plain crass showing a lack of maturity and or education. Defending vulgarity shows a lack of understanding, in some circles it may be perfectly fine (a sports bar for example) but not in other locales. Swear if you like, but don’t be surprised if people think you less intelligent for it.
Jimmy Da Silva commented 2015-09-23 21:34:01 -0400
Hyacinth,

I am happy to entertain you – but I only come to those assumptions, due to the fact that in my 44 years of living – I have never once complained about someone swearing. I don’t care – they are only common words that countless people use every day and numerous times a day one way or another. As Gavin McInnes clearly demonstrates on The Rebel.
Hyacinth commented 2015-09-23 21:04:21 -0400
“Have you actually been out there in the real world or have you been sheltered all your life and thus you are quite delicate.” Jimmy you are very humorous at times with all of your assumptions.
Jimmy Da Silva commented 2015-09-23 20:28:13 -0400
Jame,

LOL. Thank you for the big laugh.

Some of the most intelligent people on the planet use colorful language that is sure to offend your delicate sensibilities.

Does The Rebel’s Gavin McInnes offend you with all the naughty words that he uses? How about Ezra Levant – he swears as well.

That isn’t even remotely true. I work in the entertainment industry and media – that kind of language is used constantly AT work.

You know who also uses it constantly? Gavin McInnes. Do you like him?

Why does every day “coarse language” that everyone uses endlessly offend you so much? Have you actually been out there in the real world or have you been sheltered all your life and thus you are quite delicate.
Darcey Smith commented 2015-09-23 11:53:29 -0400
Let’s not forget that Truedope is the leader of the political bowel movement and party that likes to categorize and segregate people based on their ethnic background.
Hyacinth commented 2015-09-23 09:12:19 -0400
Jimmy Da Silva commented on this thread:
Desmond Cole can go fuck himself.
Can you speak fucking English?
Well if you can speak English – why do your posts always make you look like a illiterate fucktard?

They eat each other on their own insane terms. This little punk is just looking for offense. Any fool can see what Justin Trudeau meant. The main difference between Justin and anyone else who actually USES their brains and spines is Justin is too much of a bloody coward to just outright say it.

There is a problem in the US black community and yes, it is rooted in not just rap music, but the bigger issue is the non-conformist movement is is a part of. Hate the establishment. Tear it down. 911 is a joke… All leftover radicalization from the Human Rights Movement, which has gone off the rails without a conductor since the late 1990’s.
Ian Kluge commented 2015-09-22 19:09:55 -0400
This is the non-sense of ‘micro-aggression.’ Here’s the real issue: if Trudeau was really referring to the Black community, then the only relevant question is ‘Does what he said fit?’ ‘Is it true?’ Hurt feelings or being offended are irrelevant to these important questions and cannot be allowed to obscure the truth. Anything but the pursuit of the truth on such vital issues is nothing but smoke and steam.
Glenn Craig commented 2015-09-22 19:06:51 -0400
This subject matter is why I would not vote Liberal….not even if you had my grand children as hostages and started mailing me fingers and ears.

“SHAME ON ALL YOU MEN …..YOU BEAT YOUR WIVES AND INTIMIDATE THEM WITH YOUR GUNS……LOOK IT SAYS SO RIGHT HERE IN THE LIBERAL PARTY PINK BOOK……I PROMISE MORE FUNDING TO WOMYN’S STUDIES ACADEMIC RESEARCH TO BRING AN END TO THIS VIOLENCE AGAINST WOMEN….VOTE FOR ME”

So on election day all of the men in Canada …without even so much as convening a meeting at the Stepford Men’s Club to pass aresolution on the subject…with one accord beat the crap outof their women and force3d them to vote Tory at gun point.

It was the Liberal Party’s marriage to feminism (John Stuart Mill, the author of Ex Libris the Liberal manifesto was the first published male feminist) that brought about the destruction of the institution of marriage. The prevalence of "misogyn in the culture is the result of a generation of men being raised by embittered single mothers and a school system that is a Jew in Germany style pogrom against all things male.

Desmond Cole….you have no ownership of the insults this Liberal idiot spouts. Never mind trying to politically correct him with guilt and shame tactics if you intend to vote Liberal. If you do vote Liberal then count on more of the same insults….plus add the insults of stupidity and Masocism from the manosphere.
Jimmy Da Silva commented 2015-09-22 18:39:20 -0400
Charlton.